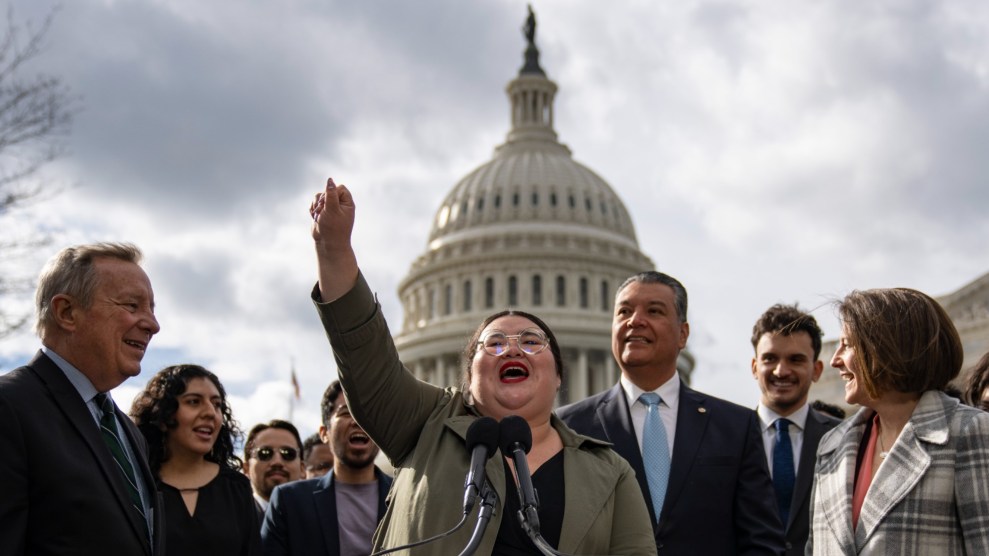 Executive Director at United We Dream Greisa Martinez speaks at a news conference about DACA.Drew Angerer/Getty

Year after year, recipients of the Deferred Action for Childhood Arrivals (DACA) program and their supporters have been asking for a long-term solution to the always under-threat policy that offers temporary relief to undocumented young people. Congress’ repeated failure to create a path to citizenship for Dreamers has relegated hundreds of thousands of youth living in the United States to legal limbo—at risk of losing work authorization and vulnerable to deportation—even pushing some people to leave the country as a result of the uncertainty. With the looming prospect of a court ruling from the Fifth Circuit Court of Appeals in a legal challenge brought by Texas and other states that could end the program entirely, and with Republicans taking over the House next year, there’s a renewed sense of urgency to find a legislative resolution for the future of the program, which is a lifeline for an estimated 600,000 people. “Even though DACA has been huge for so many of us including myself,” Diana Pliego, a policy associate with the National Immigration Law Center, told me. “We’re at the point where we can no longer wait. We’re on a ticking clock. The writing on the wall is clear: DACA is coming to an end.”

That’s what brought hundreds of Dreamers and advocates from across the country to Washington, DC, this week. On Wednesday, they joined Congressional Democrats to push for a bipartisan deal during the lame-duck session. Last year,  the lower chamber passed legislation that would have provided Dreamers with an avenue to becoming citizens.But as more than 200 immigrant, faith, labor, and civil organizations put it in a letter to House Speaker Nancy Pelosi and Senate Majority Leader Chuck Schumer, the “incoming anti-immigrant majority in the House” has spurred skepticism about any future negotiations. “Let’s put the cards directly on the table,” Sen. Dick Durbin (D-IL), who first introduced the DREAM Act twenty years ago and pushed for a Senate version of the House bill in 2021, said during a press conference. “If the House moves as we think it might politically, it becomes increasingly difficult after the first year to take up this issue. We need to do it now and to do that we need bipartisan support in the United States Senate. That’s the grim reality, the political reality of the moment.”

Sen. Dick Durbin (D-IL) says it’s crucial for Congress to pass the DREAM Act before the new year because the ‘grim reality’ is it’ll become ‘increasingly difficult’ if Republicans take over the House as projected pic.twitter.com/Tw9XviRLWo

Earlier in the week, Sen. Durbin had expressed confidence that a bipartisan deal was within reach. “Republican colleagues, particularly those who are leaving and have told me privately they’ve always wanted to vote for the DREAM Act,” he noted. To pass legislation in the Democrat-controlled Senate, they would need 10 Republican votes. “We want to get DACA done,” Sen. Schumer told reporters. “We’d like to get whatever we can do in the lame duck session, and [with] a number of our senators, led by Senator [Dick] Durbin as well as Senator [Kyrsten] Sinema and others working in a bipartisan way, we’re trying to get something done.” Senate Democrats have indicated a willingness to concede to Republicans’ likely demands to increase border enforcement in return for their support. “We can protect [Dreamers], and at the same time strengthen border security,” said Sen. Catherine Cortez-Masto of Nevada, whose slim victory secured Democrats the Senate. “We can do both…We can get it done by the end of this year.”

The Biden administration has made efforts to safeguard DACA, issuing a rule to codify the program into federal regulation and replacing a guidance memo that created DACA in 2012 via executive action. Still, the future of the program that benefits 600,000 people still hangs in the balance. In October, the conservative Fifth Circuit Court of Appeals upheld a ruling that DACA was unlawful but allowed Dreamers to keep their status while a lower court reviewed the Biden administration’s rule. The Texas v. United States case could eventually make its way to the Supreme Court, where it would likely face an uphill battle before a conservative majority.

“We cannot wait until another court tells us our futures are no more,” says Pliego. “People who don’t experience this may never understand, but we feel it every day. There are so many of us who call this country home but it won’t fully recognize us. We need commitment from leaders of both parties coming together to get it done. I’m hopeful they will hear us. We’ve been really loud and clear.”