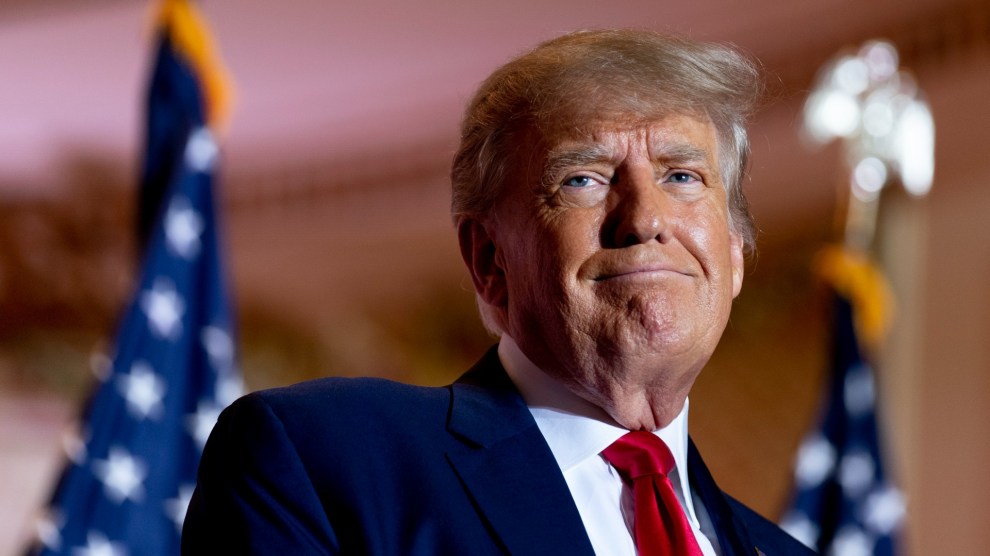 It’s unclear what the main course was, but the dessert was heaps of condemnation—from both Republicans and Democrats who are considering challenging Trump in 2024.

Fuentes has denied the Holocaust occurred and has repeatedly characterized white people as “under attack.” He attended the 2017 “Unite the Right” rally that culminated in the death of 32-year-old Heather Heyer was present on the US Capitol grounds in Washington, D.C. on Jan. 6, 2021.

Ye has lost partnerships with Adidas and the Gap for racist and anti-Semitic behavior in recent weeks, such as wearing a “White Lives Matter” shirt, baselessly promoting the conspiracy that Jewish people control the world’s financial systems, and even directly threatening Jewish people. “I’m a bit sleepy tonight but when I wake up I’m going death con 3 [sic] on JEWISH PEOPLE,” he wrote in an October 8 tweet. (It was seemingly a misspelling of DEFCON III, which is an alert state used by the US military to signal higher-than-normal readiness for corresponding threat levels.)

Yet on November 22, Trump—who recently announced a 2024 presidential bid—hosted both of Fuentes and Ye—who has also announced he’s running in 2024—at Mar-a-Lago.

Here’s what prominent Republicans and Democrats, who have all speculated about running for president in 2024, have said about it:

The former New Jersey governor and Trump fan was the first major 2016 Republican candidate for president to drop out and endorse Trump in 2016, but that allegiance is long gone.

In a November 25 article, Christie is quoted telling the New York Times that the dinner was “another example of an awful lack of judgment from Donald Trump, which, combined with his past poor judgments, make him an untenable general election candidate for the Republican Party in 2024.”

A week before, he told the attendees of the Republican Jewish Coalition’s annual leadership meeting that the reason Republicans keep losing is “because Donald Trump has put himself before everyone else.”

Arkansas Gov. Asa Hutchinson, who is term-limited and leaving his position in January, criticized Trump for the meeting.

“I don’t think it’s a good idea for a leader that’s setting an example for the country or the party to meet with [an] avowed racist or anti-Semite,” he told CNN’s Dana Bash on State of the Union. “It’s very troubling and it shouldn’t happen.”

Trump’s former Secretary of State Mike Pompeo also seemed to rebuke Trump for the dinner, though in less certain terms.

“Anti-Semitism is a cancer,” he said.

Anti-Semitism is a cancer. As Secretary, I fought to ban funding for anti-Semitic groups that pushed BDS.

We stand with the Jewish people in the fight against the world’s oldest bigotry.

Speaking to the press while on vacation in Nantucket, President Joe Biden, who has said he intends to run in 2024 but has not formally announced his candidacy, kept it brief. “You don’t want to know what I think,” he said, in response to a reporter asking what the president thought about Trump’s dinner party.

“Bigotry, hate, and antisemitism have absolutely no place in America—including at Mar-a-Lago,” Bates said in a statement, according to ABC News. “Holocaust denial is repugnant and dangerous, and it must be forcefully condemned.”