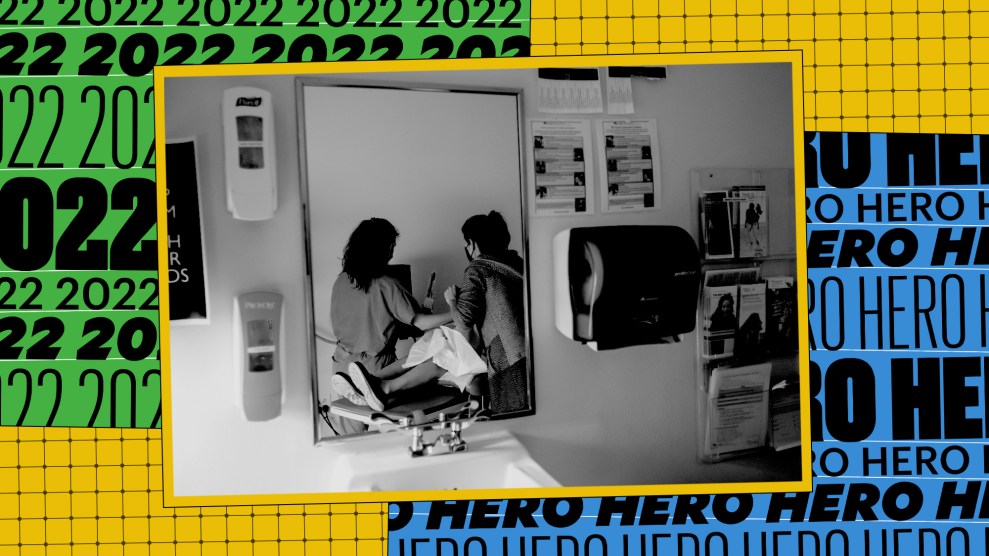 Abortion is healthcare, and no law prohibiting it can eradicate its necessity. That hasn’t stopped Republican legislators from trying. Fifty-five abortion restrictions were enacted in 2022. Many of these laws target doctors and healthcare workers, threatening them with fines and jail time for providing necessary and wanted care. But while this year may have been unprecedented, for many abortion providers, it was, at least, anticipated.

“We’re not shocked by any of it,” Dr. Christina Bourne, the medical director at Trust Women, which has clinics in Oklahoma and Kansas, told me earlier this year. “[We’re] just trying to figure out strategies and next steps.”

“You wake up every day to your fresh new hell.”

To continue providing this care in a climate so hostile to abortion it actually becomes personally dangerous is, frankly, too much to ask of anyone. But over the last year, Mother Jones has heard from providers all over the country continuing on anyway. For Trust Women, this has meant fighting to stay open no matter what. “Our day-to-day existence is about keeping our doors open and our day-to-day conversations involve that,” said Bourne. “It truncates our ability to grow and blossom and refine and be slow and intentional in the work we do when it’s just like, you wake up every day to your fresh new hell.”

Like Bourne at Trust Women, Dr. Ghazaleh Moayedi, a physician who has spent the past 18 years providing abortion care in Texas, was dealing with the frustration of trying to practice under abortion restrictions even before the Supreme Court’s Dobbs decision overturned Roe v. Wade. Moayedi told my former colleague Becca Andrews about having to operate under the state’s Senate Bill 8, which banned abortions after six weeks, but made broad exceptions for extreme medical emergencies:

We are in a state that has a high maternal mortality rate, a high maternal morbidity rate, a high infant death rate [among vulnerable populations]. Being pregnant in a state like Texas is a dangerous baseline. Being forced to be pregnant in a state like Texas can be catastrophic. My colleagues and I are having to deal with this extremely broad law that is being individually interpreted at each hospital, at each clinic, at every practice. And it’s really just about personal and system risk mitigation. How much risk is a hospital system or clinic willing to take? How can we really prove that circumstances were, in fact, life-threatening?

Nearly 60 percent of women ages 13-44 now live in states hostile to abortion rights, with some patients needing to travel hundreds of miles to get to the nearest clinic. Garnet Henderson, in a collaboration between Mother Jones and Rewire News Group, reported on how some providers are innovating to close that gap:

CHOICES, a longtime abortion provider in Memphis, Tennessee, announced in May it will open a new clinic in Carbondale, Illinois. According to CHOICES, the Carbondale location will be the southernmost abortion clinic in the state, making it more accessible for patients traveling up from the Southeast to a destination for access.

Another organization is taking this idea of a “border clinic” and running—or, rather, driving—with it: Just the Pill, which offers medication abortion services to people who live in or can travel to Wyoming, Minnesota, Colorado, and Montana. Through its initiative Abortion Delivered, Just the Pill has been establishing mobile clinics that can deploy to the borders of states where abortion is illegal. The clinics will remain in states where abortion is legal but position themselves as close as possible to state lines to cut down on travel time for patients.

These innovations are coming at a time when the stakes couldn’t be higher. “I worry about the patients,” Dr. Warren Hern, a Colorado doctor who performs third trimester abortions, told my colleague Abigail Weinberg soon after the end of Roe. “As a result of this Dobbs decision, women are going to die, as they did before Roe, because they’ll be desperate and they may try to perform abortions on themselves without adequate medical care. Or they may have been carrying a pregnancy that’s a more than usual threat to their lives.”

When I look back on this terrible year, remembering the grief and the fear that came with the end of Roe, I will also remember how it felt speaking to Bourne from Trust Women, as she told me, even under the most difficult circumstances, “my co-workers, my co-conspirators, give me a lot of hope for the ingenuity, flexibility, and creativity of people who work in abortion care.”

And I will remember Hern, who, in his mid-80s, still has no plans to give up on his work. When asked if he would retire, he said, “Retire? What does that mean? How do you spell that? Does that mean like getting new tires for your car, or what?”