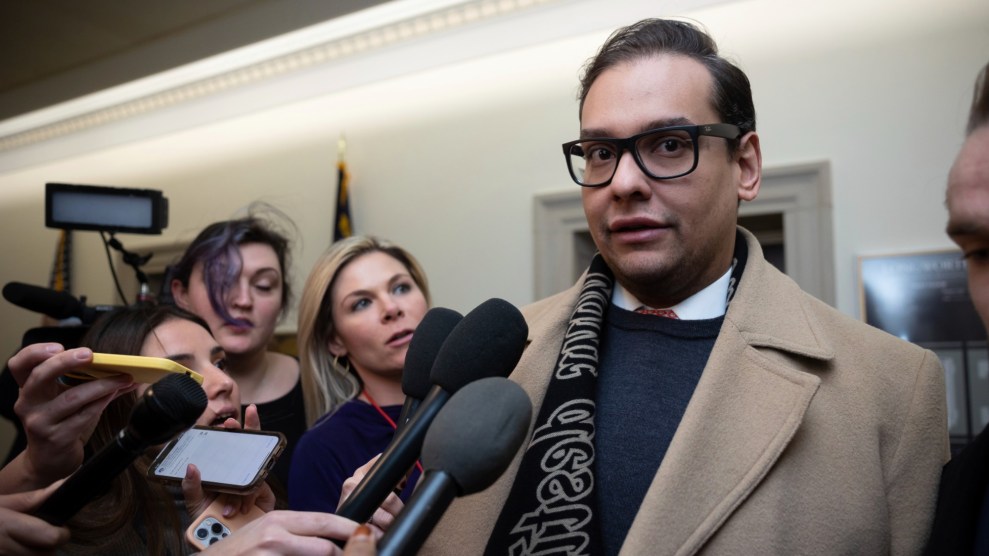 In 2008, Bruno Simões was working as a clerk at a store called The Salt in Niterói, a city that neighbors Rio de Janeiro. One day, a 20-year-old George Santos walked in. Simões watched as Santos picked out several pieces of clothing and shoes. His total added up to $1,313—”a lot of money at the time,” Simões told me. Enough that Santos used two checks to pay for his purchase.

The clerk grew suspicious. Later, when Simões tried to verify the address listed on the checks, it didn’t match the name. A couple of days after, another man came to the store to exchange a gift from his boyfriend, a pair of sneakers Simões recognized as the ones Santos bought. That’s when Simões realized he had been scammed. “It was a gut feeling,” Simões said. “He was too nice to be true”; he was “friendly and smiling,” Simões said of Santos, “like every embezzler.”

The son of Brazilian immigrants, Santos is now famous for his lies. Last November, he was elected as a Republican representative for New York. But, soon after, the New York Times published an exposé revealing the newcomer essentially manufactured his resumé and biography, lying about attending an elite private school, working on Wall Street, and having lost employees at Orlando’s Pulse nightclub shooting. He is also not Jewish, only “Jew-ish.” Santos is facing calls to resign from voters and from Long Island Republicans but has so far refused to do so.

I was elected to serve the people of #NY03 not the party & politicians, I remain committed to doing that and regret to hear that local officials refuse to work with my office to deliver results to keep our community safe and lower the cost of living.

I will NOT resign!

Simões hadn’t given Santos another thought until a few weeks ago, when a Brazilian reporter reached out to get a reaction after the publication of a New York Times exposé revealed the Queens-born GOP newcomer had embellished or fabricated most of his curriculum and biography. “It seemed to me like a joke that he would be elected congressman,” Simões said, adding he was less surprised about the fact that Santos was a Republican candidate. “He was visibly deceitful.”

“He was visibly deceitful.”

As it turns out, Santos that day with Simões had used a checkbook belonging to a former patient of his mother, Fátima Alzira Caruso Horta Devolder, who worked as a caregiver. The elderly man, Délio da Camara da Costa Alemão, was already deceased at the time. Simões was then able to find a profile of Santos on the now-defunct social network Orkut and after exchanging messages with the congressman, Santos acknowledged having “messed up” and vowed to pay the money back. When that never happened, Simões went to the police station. In a statement given to the police in 2010, Santos’ mother said her son had used four checks that had been stolen from her purse. Santos confessed to forging the signatures on the two checks used at Simões’ store, according to documents obtained by CNN.

“I wish him good luck because he will need it,” Simões, who had to use his own money to pay for the items Santos purchased with the fraudulent checks, said. “I was just one person who felt cheated, imagine the thousands of voters who elected him and are feeling deceived.”

Santos’ election also caught the attention of Brazilian authorities, who had paused the fraud investigation after losing track of his whereabouts for years. In early January, Rio de Janeiro prosecutors announced they were re-opening the case and would submit a request with the US Department of Justice to notify Santos of the charges.

The Brazilian TV show reported that Santos splurged while living in Niterói in 2008 with his mother, who passed away in 2016, and his sister. In an interview, a woman called Adriana Damasceno claimed to have met Santos at a Bingo parlor. Damasceno said they became friends and that during a trip to the United States in 2011, he went “shopping under her name, withdrew all the money she had in the bank, and even pawned jewelry.” When asked about whether she had reported anything to authorities, Damasceno said Santos bragged about having dual citizenship—American and Brazilian—and that she felt powerless to come forward.

A pharmacist interviewed for the story—who claimed to have lived with Santos and his mother in New York—described the GOP politician as a “pathological liar.” He also claimed to be in a messaging app group titled in Portuguese “mentira tem perna curta” (which could be roughly translated to “lies have short legs”) with other people familiar with Santos who compare accounts of having been lied to. Neither the congressman nor his lawyer responded to requests for comment from the Brazilian TV show, according to the story.