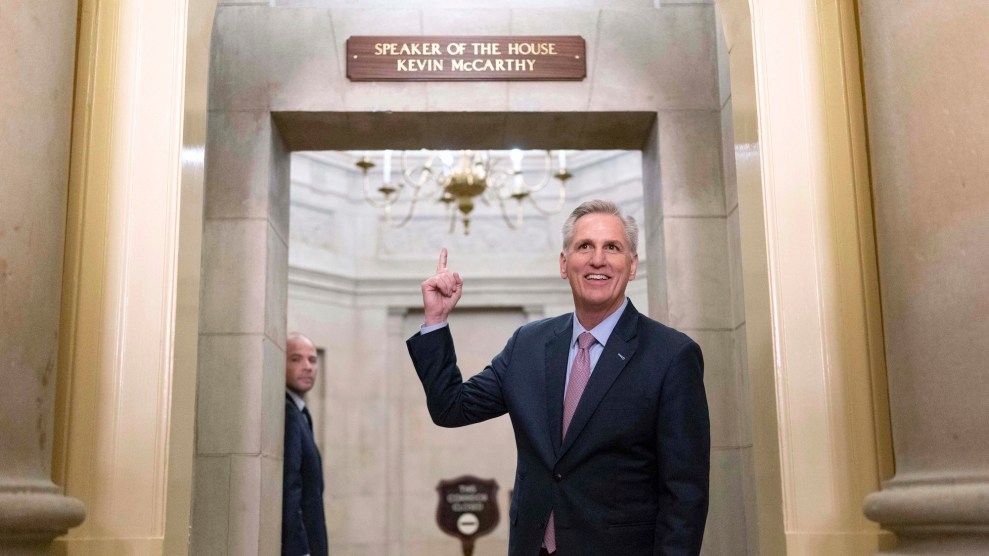 Speaker of the House Kevin McCarthy points to the newly installed nameplate at his office after he was sworn in as speaker.Jose Luis Magana/AP

After spending days and days giving away the store to secure his new position, House Speaker Kevin McCarthy has promised lots of major action starting Monday—and one of the first items on his agenda is gutting the Office of Congressional Ethics. As the epidemic of congressional stock ownership shows, ethics has never been Congress’ forte. But as one of the three independent branches of government, it has largely been left to police itself as far as setting standards and enforcing good behavior. While it’s never gone particularly well, one of the few bright points has been the Office of Congressional Ethics. It is a quasi-independent organization, staffed by professionals, and overseen by a board of eight representatives—who are not in Congress—with the idea it can be an efficient expediter of complaints. Under the rules package that McCarthy put together to try to win over hardline conservatives and the MAGA wing of the GOP, the office soon will be severely limited in its ability to operate.

The House of Representatives has its own Ethics Committee, comprising its own members who are tasked with keeping lawmakers on the up-and-up, but it has been notoriously slow to act—and often doesn’t at all. The committee’s eight members are evenly divided along partisan lines, which means there’s rarely any consensus and the committee has notably not acted as frequently as it has ever notably acted. In 2008, the OCE was set up in response to the string of ethics scandals under GOP Speaker Denny Hastert’s control, intending to be a professional, nonpartisan office that could help the ethics process along. The office investigates complaints and, if they have any merit, must submit a referral to the Ethics Committee within 30 days. While not a perfect process, the OCE has been viewed as a step in the right direction by watchdogs having spearheaded investigations into powerful Democratic Rep. Charlie Rangel and exposés of luxe congressional junkets paid for by special interests.

But one flaw in the OCE’s operation is that it requires reauthorization every time a new Congress is elected, and its ability to operate is defined by the set of rules designed and put in place by the majority party that year. This year, that’s McCarthy’s GOP, which, for all its talk about setting up investigations into the Biden family, is apparently not eager to have anyone peering into their own ethical challenges (for example those surrounding newly elected representative and fabulist George Santos).

Under McCarthy’s rules—which have not been passed yet, but will be up for a vote Monday morning and only require the support of the GOP—the OCE won’t be able to hire any new employees unless the majority of the office’s governing board approve. That rule would go into effect in 30 days and will generally make it more difficult to hire new staff if, for instance, there are any big new investigations to be undertaken.

But that’s not all. Another clause in McCarthy’s rules enforces term limits on members of the governing board (which is different and independent from the Ethics Committee), which would immediately kick three Democrats off of the OCE’s governing board. While Democratic Minority Leader Hakeem Jeffries can replace those governing board members, it’s probably going to take more than 30 days—probably not a coincidence, but certainly an effective way to hamstring the OCE from adding any new hires in the near future.

Neither of these new rules completely shutters the office, but both would immediately hobble it from taking any quick new action.

“These are measures that will render the ethics office ineffectual and which no member, from either party, should support,” Craig Holman, a lobbyist with the government watchdog group Public Citizen, said last week. “Today’s Republican party is rife with ethical transgressions. And it is now trying to make it much harder to hold members of Congress accountable to the standards of decency we expect.”

The irony in all of this is the OCE has actually sent more investigation referrals to the Ethics Committee targeting Democrats than Republicans. In fact, one of the office’s most recent is for an investigation into New York Democrat Alexandria Ocasio-Cortez. The reason for the referral isn’t public, but it’s believed to be over her attendance at the 2021 Met Gala, where she wore a $35,000 dress with the message “Tax the Rich” on it. Ocasio-Cortez has noted she did not keep the dress and attended the Gala as a guest.