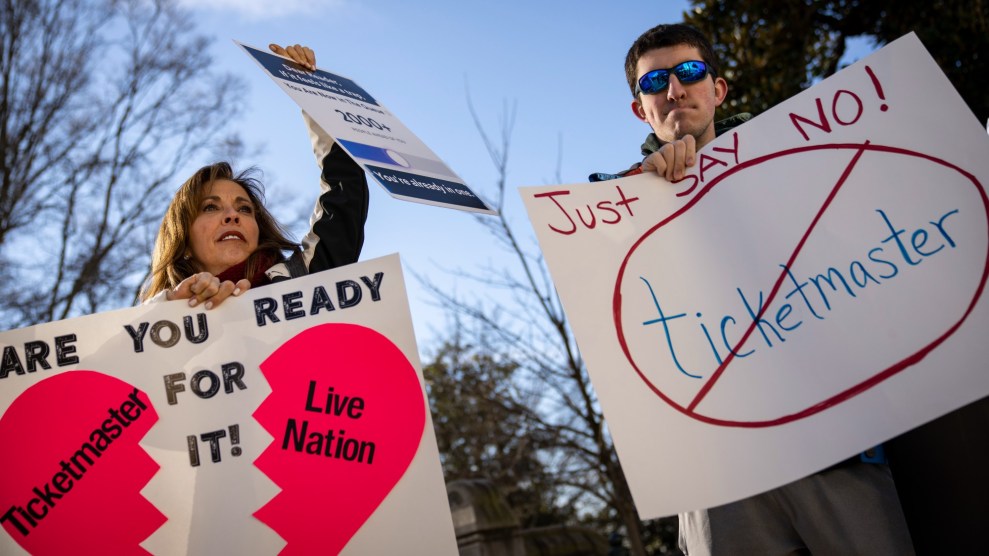 Joe Berchtold, chief financial officer of Ticketmaster parent Live Nation, doubled down on that theory during a Tuesday hearing before the Senate Judiciary’s Subcommittee on Competition Policy. Though he expressed remorse for the negative experience fans had and promised Ticketmaster would do better, Berchtold also called on Congress to “recognize how industrial scalpers breaking the law using bots and cyberattacks to try to unfairly gain tickets contributes to an awful consumer experience.”

Several bipartisan members of the subcommittee were flummoxed by the lack of accountability. Many quoted Taylor Swift lyrics to tell him so. “Live Nation and Ticketmaster is the 800-pound gorilla here. You have clear dominance, monopolistic control. This whole concert-ticket system is a mess. A monopolistic mess,” Sen. Richard Blumenthal (D-Conn.) said. “May I suggest, respectfully, that Ticketmaster look in the mirror and say, ‘I’m the problem. It’s me,'” he added, citing lyrics to Swift’s 2022 banger, Anti-Hero.

Sen. Mike Lee (R-Utah), the top Republican on the subcommittee, added a reference from another 2022 song, Karma.  “Karma’s a relaxing thought,” he said. “Aren’t you envious that for you it’s not?”

To the frustrated Senators, the Taylor Swift ticket pre-sale fiasco wasn’t an isolated accident brought on by bots or high demand, but the festering symptom of a malignant monopoly that Ticketmaster and parent company Live Nation has created over the years by dominating ticket sales, ticket re-sales, event spaces, and event promotion.

Ticketmaster controls upwards of 70-80 percent of the ticket market in the US, raking in an estimated $750 million in profits annually. Since its 2010 merger with the country’s largest live-event promoter, Live Nation, the brand has also expanded its umbrella to own dozens of venues that house the shows for which Ticketmaster sells tickets, allowing the parent company to control both the ticket and venue fees in some cases.

While many venues are independently owned and operated, witnesses at the hearing testified that the venues not owned by Live Nation often feel pressured to use Ticketmaster for ticket sales, lest Live Nation withhold future events from being housed at their facilities.

“This is all the definition of monopoly,” Sen. Amy Klobuchar (D-Minn.), the chair of the subcommittee, said.

The Department of Justice only permitted Ticketmaster to merge with Live Nation in 2010 if they entered into a consent decree that prohibited the newly combined company from retaliating against concert venues for using ticketing companies other than Ticketmaster.

Yet in subsequent years, the DOJ found evidence that Ticketmaster and Live Nation were not complying with the stipulations of the decree. For example, after a venue told Live Nation it was going to use a Ticketmaster competitor, Live Nation allegedly responded that they would cease booking shows unless no other venues in the location remained, according to one DOJ filing. Ticketmaster allegedly warned a separate venue that its response “would be nuclear” if the venue used a ticket service other than Ticketmaster.

Such allegations prompted the DOJ to modify and extend its consent decree with Live Nation until 2025 “to make clear that such conduct is prohibited.”

But competitors feel the updated consent decree is still insufficient. “Venues fear losing Live Nation concerts if they don’t use Ticketmaster,” Jack Groetzinger the CEO of SeatGeek, a Ticketmaster competitor, said during the hearing. “The only way to restore competition in this industry is to break up Ticketmaster and Live Nation.”

A break-up of this magnitude would be even messier than those depicted in Swift’s songs, as it would likely require venues having to publicly lay out the abuses they’ve suffered under the mega-company.

“In a situation where there is pervasive fear of the dominant firm, where venues and promoters and other independent rivals will potentially suffer consequences… to get someone to take that risk is not an easy ask,” testified Kathleen Bradish, the vice president for legal advocacy at the American Antitrust Institute.

Regulatory action remains possible, despite the challenges. The DOJ is reportedly investigating the company after it bungled Swift’s pre-sale event.

And Congress can take its own legislative actions to reign in Ticketmaster’s market control—which Klobuchar said was one potential course of action at the outset of Tuesday’s hearing.

Lee, the Utah Republican, called for new antitrust regulation or “better enforcement of existing laws.” Meanwhile, Blumenthal mentioned re-upping the BOSS Act, which would, among other things, require ticket sellers be more transparent about where ticket fees go, and prohibit primary ticket sellers from restricting the ability of a purchaser to resell tickets.

For now, the final outcome of the scrutiny remains to be seen. The resounding message to Ticketmaster, however, rang crystal clear.

To quote the pop-star who inspired Tuesday’s hearing: “Look what you made me do.”