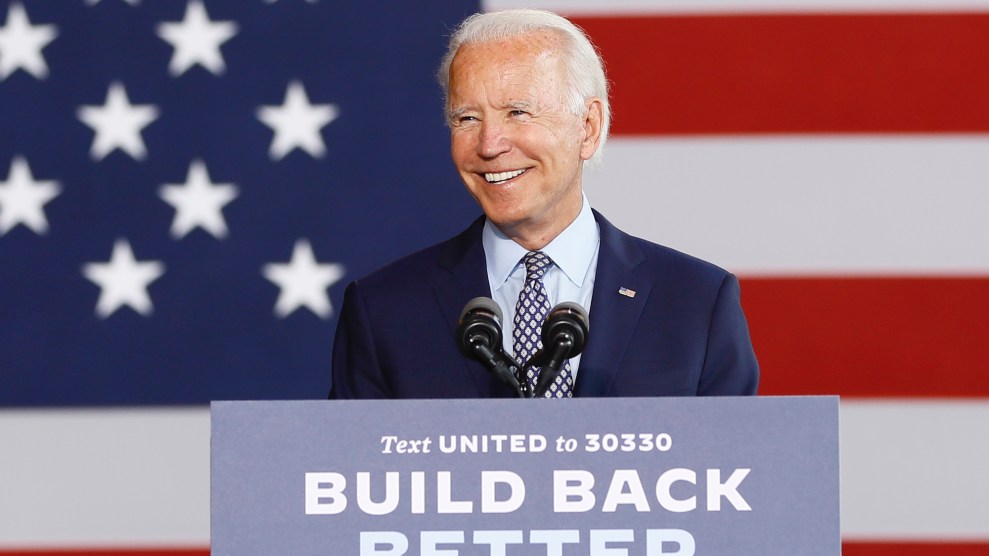 It took a pandemic, a botched governmental response, and a recession. But at long last, a Democratic presidential nominee is promising a universal, federally backed child care program that recognizes caregiving’s crucial role in the US economy.

The proposal is a key plank of Biden’s “caregiving and education workforce,” the third pillar of an economic recovery plan that also includes an investment in American manufacturing and green infrastructure. Under his new proposal, families with children under the age of 5 would have two choices. Option one: They could elect to receive a tax credit that covers up to half of their annual child care expenses. Option two: They could opt into a plan that would guarantee they pay no more than 7 percent of their income on child care, based on a sliding scale outlined in a bill originally proposed by Sen. Patty Murray (D-Wash.) and Rep. Bobby Scott (D-Va.).

Under the tax credit plan, families making less than $400,000 per year would receive up to $8,000 for one child, or up to $16,000 for two or more children. Under the alternative sliding scale plan, the lowest-income families would pay nothing for child care, while a typical family would pay $45 per week.

Biden’s plan would be a massive step up for working parents. Families currently receive up to $2,000 in tax credits for each child, in addition to a small child care tax credit. In most states, meanwhile, a year’s worth of child care costs more than in-state tuition at public universities. It’s also a cost most families can’t avoid. In two-thirds of families with children and married parents, both parents work, according to the Bureau of Labor Statistics. So do most of the country’s 13.6 million single parents. The cost burden is extreme for low-income families, who spend up to 35 percent of their income on child care, according to an analysis from the Center for American Progress, a liberal think thank.

For Biden, the issue is personal. The former vice president became a single father after his wife and young daughter were killed in a car crash. His sister Valerie gave up her career as a teacher to take care of Biden’s sons so he could commute from Delaware to Washington to serve in the US Senate.

It’s also a critical component to any credible economic recovery plan. Contrary to regressive and outdated gender norms, child care is an economic issue. A 2018 CAP study estimated that US gross domestic product would rise by $210.2 billion if the country adopted a universal child care plan with costs capped at 10 percent of families’ incomes. The rise in productivity would come from parents who could either enter the workforce or increase their hours if their children were cared for. Biden’s plan promises to create new preschool and child care jobs, and will give existing workers a raise “reflective of the true cost of care.” Child care workers—a huge percentage of whom are women of color—currently earn a median income of $10.72 per hour. (Though the Biden proposal does not specify precisely how much child care workers will be paid, he supports a $15-per-hour minimum wage.)

Democrats have long acknowledged child care’s crucial economic role, but they haven’t put policy behind those assertions. During his 2015 State of the Union address, President Barack Obama called child care a “must-have” that should be treated as a “national economic priority;” his solution was to simply triple the existing child care tax credit to $3,000 per child. Hillary Clinton ran for president as a champion for women and children, but her plan—really, more of an outline—would have relied on a combination of tax credits and state block grants to keep costs for families under 10 percent of their annual income.

Last winter, Elizabeth Warren became the first Democratic presidential candidate to propose a universal child care plan since President Richard Nixon vetoed legislation to implement such a system in 1971. All of her fellow 2020 hopefuls authored detailed proposals to employ Americans in well-paying, unionized jobs. But few candidates had more than a vague notion of who would watch the children of the newly employed.

Biden had been among those who held back. But that was in The Before—specifically, before the pandemic worsened every aspect of country’s teetering child care system. An April survey by the National Association for the Education of Young Children found that half of all US child care providers had closed in the face of the pandemic, and that another 17 percent were shuttered to everyone except the children of essential workers. As daycare centers lost revenue, CAP calculated that half of the nation’s child care slots were at risk of disappearing for good.

Meanwhile, as children and parents stay home, caregiving has fallen disproportionately on mothers. Among families with two parents who work full time, women are performing nearly 70 percent of child care duties, according to recent research from Northwestern University. And the pandemic-induced recession has been particularly hard on women, who have lost their jobs at a higher rate than men, ending the brief window when women accounted for a greater share of the US workforce than men. As cities and states weigh whether to reopen schools in the fall, the circumstances are forcing many working mothers to reconsider whether they can continue with their careers at all.

This also explains why a proposal like Biden’s is good politics. In a recent poll conducted by CAP, 86 percent of voters—including 77 percent of Republicans—supported Senate Democrats’ proposed $50 billion bailout of the child care industry, which is up for negotiation as part of the next coronavirus relief package. In May, endangered GOP Sens. Kelly Loeffler (R-Ga.) and Joni Ernst (R-Iowa) proposed a $25 billion bailout of the child care industry. So while Biden’s plans do, in large part, rely on acts of Congress, he just might have some willing partners across the aisle.