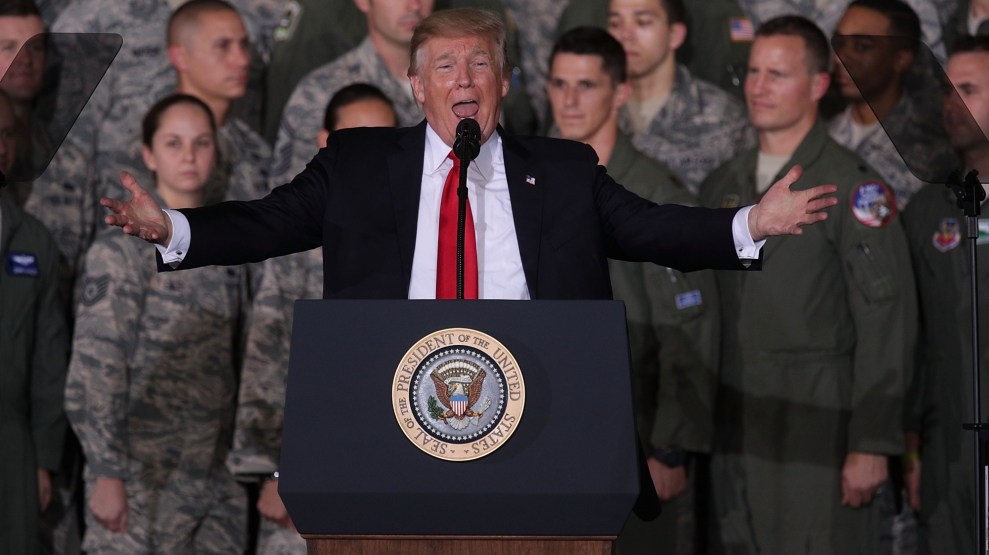 Donald Trump’s popularity with members of the military is at an all-time low, according to the findings of a Military Times poll released Monday. Nearly 50 percent of troops view him unfavorably and more than 43 percent say they will vote for Joe Biden in November, compared to just 37.4 percent planning to vote for Trump.

The male-dominated military tends to be more politically conservative than the general population, but since Trump took office, his support among active-duty troops and veterans has taken a nosedive. In May 2016, more than 54 percent of troops surveyed by Military Times said they intended to vote for him, but by 2018, his support had taken a dive. That year, Trump sent thousands of troops to the southern border as part of a pre-election stunt to draw attention to the arrival of a migrant caravan, shocked his advisers by announcing an unexpected withdrawal of US forces from Syria, and sparred with James Mattis, the retired Marine Corps general who resigned as secretary of Defense that December.

Despite his clashes with military leaders and numerous attacks on military families like the Khans, Trump had mostly maintained high levels of support among veterans and enlisted service members. Veterans were even credited with helping him win the White House, given their outsized support for him in swing states like North Carolina, Ohio, and Florida. But that support is not as persistent as Trump, or his allies, seem to think.

New @MilitaryTimes survey of active duty troops has absolutely devastating numbers for @realDonaldTrump. The Republican Party has long considered the military as part of its base, but Biden is now leading Trump among servicemembers 43/37.https://t.co/2c5ifD4KI1 pic.twitter.com/wqfIxrNOkc

In recent months, he has frustrated the military with a series of bizarre, politically-motivated orders, from clearing several service members accused of war crimes to requiring West Point cadets to return to campus, at the risk of their own health, so he could give an in-person commencement speech.

His threat to use the military to quell protests in the wake of the killings of George Floyd sent another shock through the military community, leading even the tight-lipped Mattis to step off the sidelines and condemn Trump. Rosalinda Maury, director of applied research at Syracuse University’s Institute for Veterans and Military Families, which conducted the survey in partnership with Military Times, told the news outlet that, despite some commonalities on certain topics, “the military is not a homogenous population.” But what’s clearer than ever is that Trump’s expectation that the military will have his back at the polls, as they did in 2016, is a flawed one.