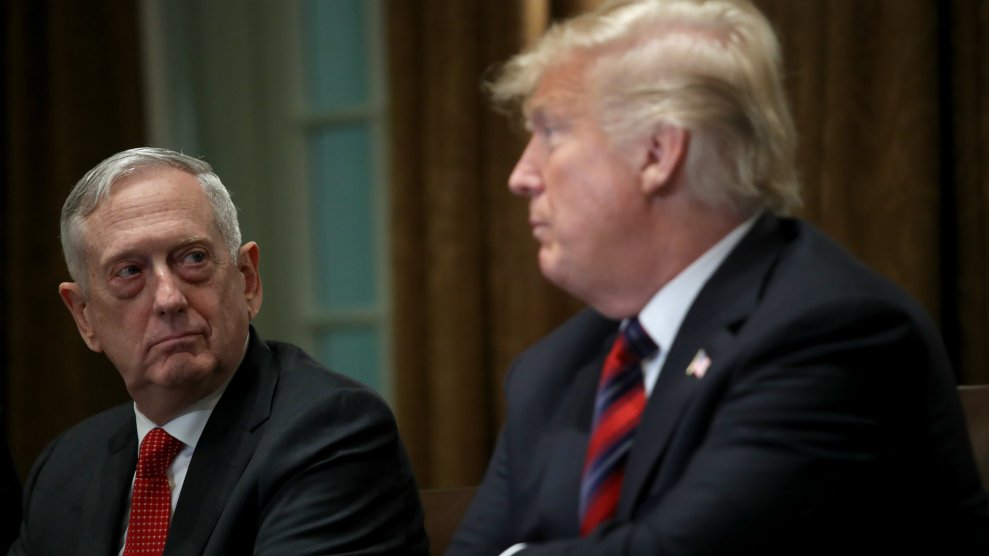 James Mattis, the retired Marine Corps general who became Donald Trump’s first secretary of defense, is resigning, according to a tweet from the president. He was the most recent Cabinet official to be purged from an administration that has already endured a record level of turnover. Deputy defense secretary Patrick Shanahan, a former Boeing executive with no prior military experience and only 17 months working at the Pentagon, will likely replace Mattis in an acting capacity.

General Jim Mattis will be retiring, with distinction, at the end of February, after having served my Administration as Secretary of Defense for the past two years. During Jim’s tenure, tremendous progress has been made, especially with respect to the purchase of new fighting….

Yesterday, Trump announced he plans to pull US troops from Syria, reportedly breaking with the advice of Mattis and the rest of his national security advisers. In his resignation letter, Mattis writes: “My views on treating allies with respect and also being clear-eyed about both malign actors and strategic competitors are strongly held and informed by over four decades of immersion in these issues. We must do everything possible to advance an international order that is most conducive to our security, prosperity and values, and we are strengthened in this effort by the solidarity of our alliances.

“Because you have the right to have a Secretary of Defense whose views are better aligned with yours on these and other subjects, I believe it is right for me to step down from my position.”

Trump had been expected to oust Mattis for weeks after reports emerged of discord between the White House national security staff and the Pentagon’s top official. In an interview on 60 Minutes in October, Trump described Mattis as “sort of a Democrat”—not exactly a favorable moniker from a commander-in-chief who has called Democrats “phony hypocrites” and accused them of “declaring war on Law & Order.”

Mattis appeared to return the White House’s enmity. After a combative meeting last January between Trump and his National Security Council, Mattis reportedly said the president had the understanding of a “fifth or sixth grader,” according to reporter Bob Woodward’s book on the Trump administration. (Mattis called the account “fiction” with sources that “do not lend credibility.”) During the infamous Cabinet meeting when all members were asked to express their admiration for Trump, Mattis instead praised the “men and women of the Department of Defense,” but not Trump.

Before his relationship with Trump went south, Mattis was revered by the president—for his nickname if nothing else. He acquired the moniker “Mad Dog” due to a history of strikingly frank comments about the violent nature of war. “Be polite, be professional, but have a plan to kill everybody you meet,” he was once quoted telling Marines in Iraq. Evidently no fan of the nickname, Mattis assured senators during his confirmation hearing that it was a construct of the media. “Some of you may have experienced similar occasions with the press where perhaps they didn’t get it quite right,” he said.

“Be polite, be professional, but have a plan to kill everybody you meet,” he was once quoted telling Marines in Iraq.

Despite his frequent disagreements with the White House, Mattis, a retired four-star general, was widely respected within the Pentagon. Even Democrats admired the reputation he built over 42 years in uniform. During Mattis’ confirmation hearing, Sen. Jack Reed (D-R.I.) told him, “You will be, to paraphrase Thomas Jefferson, the saucer that cools the coffee.” The Senate confirmed him as secretary of defense in a 98-1 vote.

At the Pentagon, Mattis restored an emphasis on making the military as deadly as ever. This focus on “lethality,” as opposed to deterrence, gave teeth to Trump’s bold proclamation to “rebuild our military.” Under his leadership, the Army and Air Force have extended their training time for basic recruits to prioritize more of a focus on weapons, Task & Purpose reported. On the Defense Department’s home page, officials also changed the Pentagon’s mission statement to no longer include the phrase “deter war.” Last October, Mattis reiterated this line of thinking in guidance sent to DoD personnel at the start of a new fiscal year. “We are a department of war,” he wrote.

But in recent months, Mattis “has been out of step with many of the president’s foreign policy impulses,” the Washington Post reported. In Afghanistan, where Trump has repeatedly expressed a desire to draw down our military presence, Mattis reportedly convinced him to escalate the fight against Taliban fighters with a nearly 50 percent increase in troops. Mattis also moderated Trump’s impulse to remove US troops from Syria prior to yesterday’s announcement. Even though the Islamic State lost 98 percent of the territory it once controlled, US officials said in September they will not leave Syria until Iran and its proxies depart. That policy contrasts with Trump’s stated desire to “bring our troops back home” from Syria, which ultimately won out.

Around the globe, Mattis has played the role of consoling and reassuring American allies of the nation’s intention to not abandon multinational alliances that have maintained international order since World War II. At a security conference in Singapore last June, he said, “We have got plenty of valid reasons for many nations to work together in maintaining the rules-based order today,” including “the value in commerce and in security.” As Trump has ramped up his trade war with China and alienated traditional allies like Canada and Germany, Mattis has seemed to align his approach more with that of the White House. At this year’s version of the same conference, Mattis said the competition was “intensifying” between nations and “a clear-eyed view of the strategic environment” was needed.

On other issues, Mattis seemed to express some opposition to his commander-in-chief before finally acquiescing. Months after Trump’s surprise announcement by tweet that he would ban transgender troops from military service, Mattis argued for current trans service members to stay, but in a memo told Trump these troops “could undermine readiness” and “impose an unreasonable burden on the military.” A 2016 study conducted by the RAND Corporation disputed that notion, finding at most a “marginal impact on health care costs and the readiness of the force.” Mattis also initially opposed Trump’s idea to create a Space Force, which would constitute a sixth branch of the military, before changing course and commissioning Shanahan to develop the idea to present to Congress.

Before entering government, Mattis led a distinguished career as a Marine with command roles in the First Gulf War and the subsequent invasions of Afghanistan and Iraq after the terrorist attacks on September 11, 2001. When he was named leader of all US armed forces in the Middle East in 2010, then-Defense Secretary Robert Gates called him the “one of the most formidable warrior scholars of his generation.” In a wide-ranging profile in the New Yorker, Dexter Filkins wrote that Mattis’s “bachelorhood allowed him a single-minded focus on his career and a passionate engagement with the military’s traditions and history.” His library reportedly “contains thousands of books.” While respected across party lines, Mattis grew out of favor with the Obama administration due to his persistent focus on countering Iran, Filkins wrote.

Since taking office, Trump has completely overhauled his national security team with loyalists at odds with Mattis. Secretary of State Rex Tillerson, who was close with Mattis, was fired in March and replaced by Mike Pompeo. National Security Adviser H.R. McMaster, who did not always see eye to eye with Mattis, was ousted in favor of John Bolton, a hawkish conservative who reportedly pushed for the secretary’s exit. And Nikki Haley, Trump’s ambassador to the United Nations, announced she would be leaving her post in January. Heather Nauert, Pompeo’s spokesperson, has been nominated as her successor.