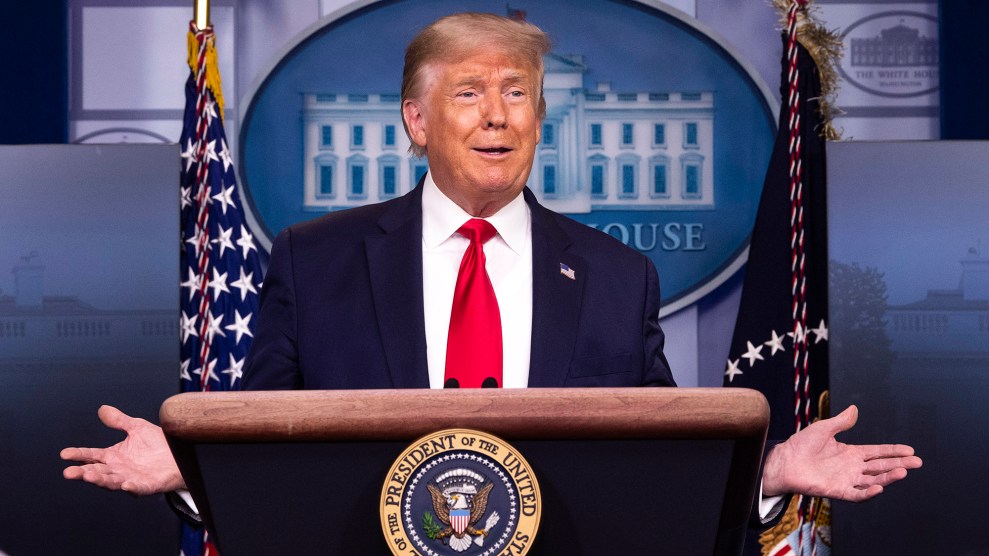 As Donald Trump’s strategy of hobbling the US Postal Service to undermine mail voting comes into clearer focus, it might be easy to forget that the president is also going to great lengths to weaken confidence in the voting system more generally.

The president stoked that part of his war Saturday morning, retweeting a tweet from Republican National Committee spokesperson Elizabeth Harrington claiming that Democrats are knowingly engaging in fraudulent behavior via mail voting:

The Democrats know the 2020 Election will be a fraudulent mess. Will maybe never know who won! https://t.co/tEWKJ5NcUj

What the president may not realize is that he’s showing voters that even though problems exist—some serious and in need of sustained public education campaigns by local election officials—the situation he points to as evidence that mail voting can’t be trusted is an example of how hard it would be to rig elections at scale with mail ballots.

The tweet is referring to a local city council election in May in Paterson, New Jersey. As the novel coronavirus pandemic raged, New Jersey Gov. Phil Murphy mandated that elections would be conducted entirely by mail. According to the Washington Post, local officials mailed ballots to all eligible voters, and some of those ballots were improperly delivered in some large apartment buildings. Rather than blank ballots being delivered into individual boxes, some were left outside of the boxes.

Some of those ballots were stolen, and then campaign workers for a city council candidate filled them out for preferred candidates and affixed images of signatures they’d gathered from past petition drives to the ballots. The ballots were then bundled and put into a mailbox in hopes they’d eventually be counted.

The four men alleged to be involved in the scheme were caught after a postal worker saw 347 mail ballots bundled together in a local post office and decided to take a closer look. That review led to more scrutiny of all of the ballots, leading to 3,274 being rejected by the local elections board. Election officials determined that roughly half the ballots eventually rejected had signatures that didn’t match a voter’s signature on file, and others were rejected because a portion of the envelope requiring a signature from the person who submitted the ballot was not filled out (New Jersey law allows people—”bearers”—to let others submit their sealed ballots on their behalf, but the bearer can only submit three ballots not their own and must sign the outside envelope).

So what the national Republican official and the president are pointing to is a system that caught alleged misbehavior: Postal workers noticed problems leading to the local election officials reviewing ballots and finding other apparent problems. The situation does highlight some problems with mail voting in elections, the Post noted, many of which trace back to insufficient voter education on the part of election officials. Nationwide, nearly 319,000 mail ballots were rejected in the 2016 election, a separate Post analysis found, representing about 1 percent of all mail ballots during that election.

Reasons for rejection include signature mismatches, late arrivals, unsealed envelopes, among others, but rarely is it outright fraud, as was the alleged case in New Jersey. Voting rights advocates and election administration experts say the problems have to do with the rules related to mail ballots: the integrity of envelopes, when they can be counted and processed, when they need to arrive, etc. This is a main reason why congressional Democrats and nonpartisan state and local election officials have asked for additional funding as part of COVID-19 relief packages, saying that voter education campaigns and updated infrastructure is needed to handle the surge in mail voting expected this fall as voters avoid in-person voting for fear of getting sick.

So if the president actually cared about a more accurate election via mail ballots—the method by which he and his family vote, by the way—he might consider supporting the funding and measures nonpartisan election officials advocate to support secure mail voting. Instead he’s steadfastly opposed to any election-related funding in the relief packages or additional money for the postal service because, as he says, he doesn’t want it to be able to better handle mail ballots. And it looks like he might get his wish. On Friday, the Washington Post reported that the postal service had sent a letter to 46 states and the District of Columbia alerting government officials that some states’ mail ballot timelines may not work with the postal service’s delivery timelines, especially as Trump’s hand-picked postmaster general cuts overtime and enforces other cuts in the name of “efficiency,” even if that means mail doesn’t get delivered on time.