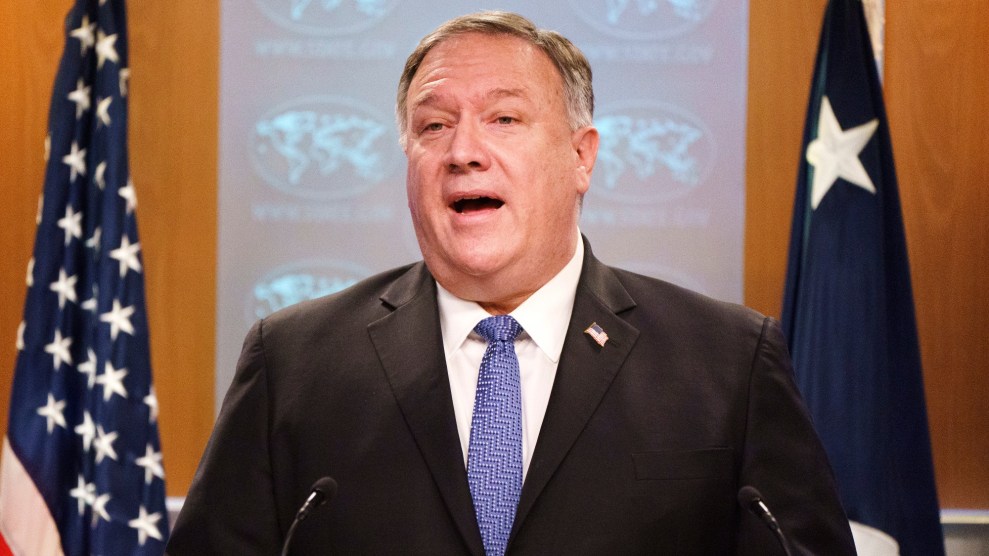 Joe Biden won the presidential election decisively, but Secretary of State Mike Pompeo seems intent on denying that reality. When asked Tuesday at a press conference about engaging with the Biden transition team, Pompeo assured reporters that “there will be a smooth transition to a second Trump administration.”

Q: Is the State Department currently preparing to engage with the Biden transition team?@SecPompeo: "There will be a smooth transition to a second Trump administration." pic.twitter.com/ANW2DcDIlQ

On Saturday, news outlets projected that Biden won Pennsylvania and, therefore, the presidency; he now leads in the Keystone State by more than 47,000 votes—a margin that is likely to grow larger. An outpouring of well-wishes followed from traditional US allies, including the United Kingdom, France, and Germany, even as Donald Trump falsely declared that he would ultimately win the election. Trump allies, including Senate Majority Leader Mitch McConnell (R-Ky.) and Attorney General William Barr, have kept up the fiction that widespread voter fraud was to blame for Biden’s victory. Coupled with Pompeo’s extraordinary comments, it’s clear that the Trump administration isn’t planning to concede defeat anytime soon, despite the absence of evidence supporting those fraud allegations.

As for Pompeo’s remarks, it’s not clear precisely what he meant to communicate. He smirked after mentioning “a second Trump administration,” leading some commentators to suggest that he was joking. But for four years, we’ve all seen Trump officials use “it was just a joke!” as cover for some of Trump’s wilder comments, including his appeal for Russia to find Hillary Clinton’s emails and his assertion that he’d ordered a slow-down in coronavirus testing so the number of confirmed cases wouldn’t be as high. Pompeo’s comment “needs to be seen in that context,” New York Times Trump-watcher Maggie Haberman wrote on Twitter.

“Mike Pompeo has never hidden the fact that he prioritizes his role as political partisan over his obligations as secretary of State,” Rob Berschinski, senior vice president for policy at Human Rights First, told me. “Whether based in sycophancy or illusion, it’s equal parts embarrassing and disturbing to hear America’s top diplomat speak in this way.”

Making things even more bizarre, Pompeo pivoted from that “joke” to an answer about the US electoral process that borrowed from some of Trump’s talking points about “legal” and illegal votes. “I’m very confident that we will count, and we must count, every legal vote,” Pompeo said. “We must make sure that any vote that wasn’t lawful ought not be counted.”

More evidence in the It-Wasn’t-A-Joke column: Pompeo ended the presser by reacting aggressively to a question about whether his equivocating stance on the election results undermined the messaging US diplomats often give about the importance of fair elections in foreign countries. “That’s ridiculous, and you know it’s ridiculous, and you asked it because it’s ridiculous,” Pompeo told Reuters‘ Hümeyra Pamuk before abruptly leaving the podium.

The comparison is far from ridiculous. The State Department regularly puts out statements criticizing countries for not being transparent or fair in their election process, including as recently as the week of the US presidential election. As Alex Ward from Vox pointed out last week, Pompeo used his Twitter account to call out anti-democratic behavior in Tanzania, Belarus, and Cote d’Ivoire while remaining silent about Trump’s own ongoing affront to democracy.