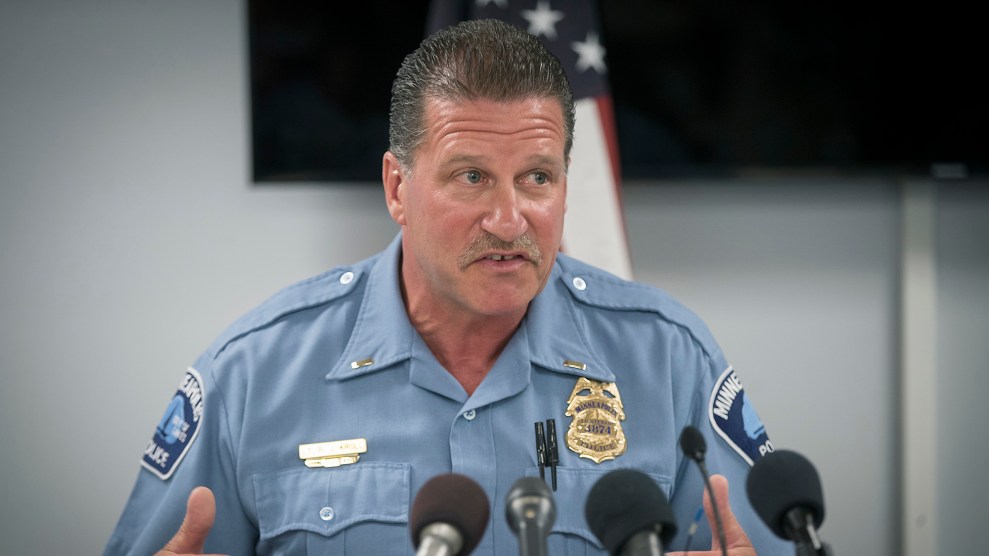 Lt. Bob Kroll, the outspoken leader of the Minneapolis police union, is not normally one to shy away from the media spotlight. Last October, he proudly took the stage with President Donald Trump at a televised campaign rally in the city. And over the years he’s been quick to speak with reporters, whether to defend police officers or condemn Black Lives Matter, which he once described as a “terrorist organization.”

But in the days since George Floyd’s death at the hands of a white officer in Minneapolis, as tens of thousands of people protest around the country, Kroll has been reluctant to comment to the press. Over the past week, as activists call for Kroll to resign and accuse the police union he leads of protecting officers who engage in misconduct, journalists at multiple outlets, including myself, have reached out to Kroll repeatedly and not heard back. On Wednesday, the Washington Post reported that Kroll called the police on one of its reporters who had knocked on his door for an interview. The reporter was later pulled over by an officer who said Kroll had reported suspicious activity on his front porch and explained that “he doesn’t want any press.”

Kroll called the police on a reporter who had knocked on his door for an interview.

But even as Kroll hides from the press, there’s a fact that he can’t run away from: He’s married to a local television reporter and anchor in Minneapolis, Liz Collin of WCCO-TV, who previously reported on policing in the city—without disclosing their relationship. On Wednesday, protesters showed up at the news agency’s headquarters in downtown Minneapolis and called for Collin to resign from her post. They described her marriage to Kroll as an “obvious conflict of public interest.”

It’s unclear when Kroll and Collin began dating. In 2016, Collin interviewed Kroll, who has been a frequent subject of reporting for the TV network, about police use of force. Minneapolis-based reporter Becky Dernbach, previously a Mother Jones fellow, learned about their relationship in June 2017, and revealed their marriage in a series of tweets in 2018. Since at least 2013, Collin had been covering the Minneapolis police department for WCCO. In July 2017, Collin reported a story about then-outgoing Police Chief Janee Harteau, who was resigning at the mayor’s request following the fatal police shooting of Justine Damond. Collin did not disclose her relationship with Kroll in the article, even though Harteau had a contentious history with Kroll: In one heated exchange in 2016, the police chief said the union president made “jackass remarks” when he commended officers who walked off their security jobs at a Lynx basketball game to protest players wearing Black Lives Matter warm-up jerseys. Kroll responded to the chief’s criticism by selling #jackass T-shirts to the public.

Collin and her station, WCCO, say there is no conflict of interest in her marriage to Kroll. In a statement to Mother Jones, a WCCO spokesperson said Collin has not reported on stories about the police department or police union for two and a half years, since around the time that Dernbach started tweeting about their marriage. “We would like to add nothing that goes on our air is the work of just one person,” the spokesperson added. “Our news managers, producers, anchors, reporters, photographers and editors all work together as a team that delivers news everyone in our community can trust to be fair and accurate.” Collin and Kroll did not respond to a request for comment, but Collin made a similar statement in 2019.

We tip our hat right back to you! Thank you for all you do!

Kroll, meanwhile, has slammed the media for covering his relationship with Collin. In 2019, he threatened to never give another interview to the Minneapolis Star Tribune if it reported on their relationship. (In a profile of the union leader, the paper briefly mentioned their marriage anyway.)

Kroll has also criticized the media for its coverage of the anti-police protests that have taken place since Floyd’s death, during which Minneapolis’ officers launched tear gas and flash grenades at demonstrators. The day after Floyd died, Kroll put out a statement expressing solidarity with his colleague Derek Chauvin, who knelt on Floyd’s neck for nearly nine minutes during the arrest.

In 2019, he threatened to never give another interview to the Minneapolis Star Tribune if it reported on their relationship.

In an email to members of the police union—leaked on Twitter by former police chief Harteau—Kroll described the media coverage as biased and inaccurate. “I commend you for the excellent police work you are doing in keeping your coworkers and others safe during what everyone except us refuses to call a riot,” he wrote in the email. He described the protests as a “terrorist movement” and said the four officers involved in Floyd’s death had been fired “without due process.” “What is not being told is the violent criminal history of George Floyd,” he added. “The media will not air this.” (Floyd was arrested by the four officers for allegedly trying to use a fake $20 bill at a shop. He had a previous arrest record and was sentenced to five years in prison more than a decade ago. But this history appears to have no relevance to his death: Video footage of the arrest does not show him acting violently toward the officers. He went unconscious minutes before Chauvin stopped kneeling on his neck.)

Kroll chalks up his silence to safety concerns. “Another large reason we have not been more vocal beyond our initial press release is the negative impact and safety implications it would have for you trying to do your work,” Kroll wrote to officers. “I’ve been a visible target from the groups conducting this riot, politicians on the left allowing it and encouraging it, and liberal media. My visibility during this time would only increase your danger.”

Perhaps it’s not surprising that Kroll, despite his marriage to a journalist, is slamming the media for its coverage of the police and the protests. It was only last October that he stood onstage and praised President Trump for “everything he’s done for law enforcement.” Trump, after all, wrote the playbook for threatening journalists and brushing aside their facts as “fake news.”