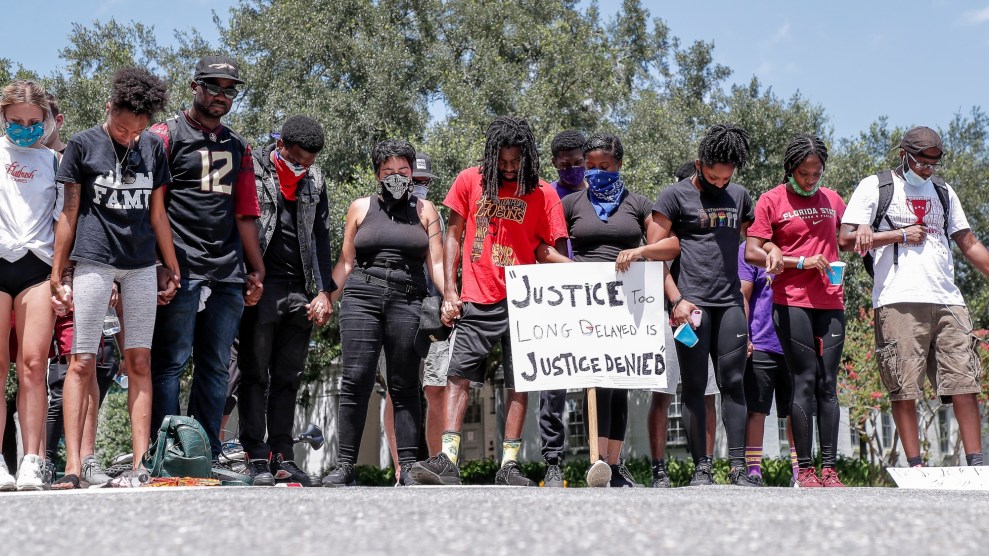 Protestors participated in a "unity walk" in Tallahassee in June. Don Juan Moore/Getty

It has been two months and we still don’t know the name of the police officer who shot and killed Tony McDade in Tallahassee, Florida. The reason sounds ridiculous: The cop is claiming that in his encounter with McDade he was the victim and that, under a state law, his personal information should be protected.

On Friday, a local judge ruled against that argument.

In a lawsuit, the Florida Police Benevolent Association sought to keep the officer’s identity under wraps by offering him protections under the victims’ rights amendment to the state’s constitution. As a victim, they said, the law guaranteed him privacy, broadly defined. In this case, they argued that meant keeping confidential all identifying information about the officer, such as his name, prior disciplinary records, and body camera footage. But Leon County Judge Charles Dodson declared that the law, colloquially known as Marsy’s Law, “was not intended to apply to law enforcement officers when acting in their official capacity” because it could grant them “virtual anonymity” whenever they use force.

The case exemplifies an increasingly popular tactic to conceal police brutality. Critics of Marsy’s Law, including Andrea Lyon, a Chicago defense attorney, say cops can use it to control the narrative and reframe the people they kill as the aggressors. As I wrote last month:

Lyon told me that when police invoke Marsy’s Law, it tips the scales of justice even further to the disadvantage of a defendant. In her more-than-40-year career Lyon has defended hundreds of clients, including some who have survived police shootings, only to be charged with attempted murder of an officer. “It’s really quite common,” she said. When police claim victimhood, it makes it incredibly difficult for the defendant to claim self-defense. And without access to an officer’s personnel reports, it’s almost impossible to prove a pattern of brutality—it becomes a defendant’s word against law enforcement’s. And who do people usually believe?

“In the case at hand, Petitioner seeks to treat officers Doe 1 and Doe 2 as victims; however, the would-be accuseds are dead,” he wrote. “The officers do not seek protection from the would-be accused, instead they apparently seek protection from possible retribution for the on-duty actions from unknown persons in the community.” He continued that he could not interrupt a victims’ rights law “to shield police officers from public scrutiny of their official actions.”

The police union has already appealed the ruling. Until that is exhausted, we still won’t know the officer’s identity.