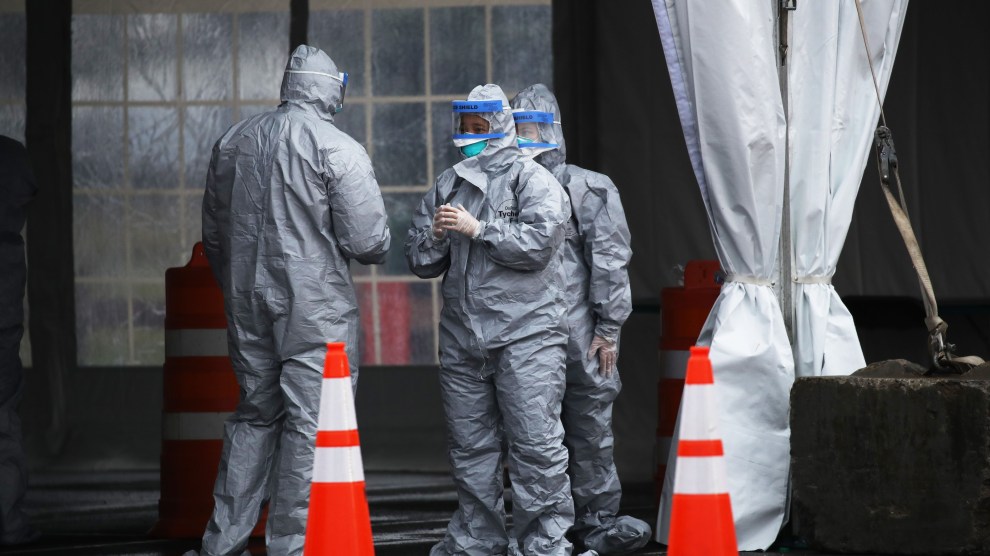 I conducted an interview with a physician who wanted to remain anonymous for job-security reasons. The doctor’s remarks have been edited for clarity.

I’m a 38-year-old physician. My specialty is surgery, and I’ve been practicing for 12 years including surgical training. I’m a member of three different private coronavirus Facebook groups just for physicians and other health care providers. Each group has anywhere from about 5,000 to 45,000 members. I am not on the front lines right now, but what I’m hearing is really alarming.

I’ve never seen anything like this in my professional life.

Early on, from what we were hearing from the media, many of us were sort of thinking this is a disease really for older people. Last week, even one of my own colleagues was in the anti-panic mode, you know, trying to calm everyone down, posting that, “It’s not surprising when grandma gets a cold that she might die.”

But what I’m hearing from these groups now is that people are seeing folks in their thirties and forties getting severely ill. In the last 24 hours, just in these groups, I have heard of one paramedic and three ICU nurses that have been intubated. Clearly the denominator is huge, but even if it’s just a handful of critical cases of younger people, this is concerning and different from what we first thought.

A major theme early on last week was the shortage of testing. Last week, one doctor reported a patient whom she could not get tested effectively telling her, “Well, if my government doesn’t think I need to be tested, then I’m not going to quarantine myself.” That highlights the message it sends when you know your doctor can’t get you tested. And I think what we were seeing there was also this scary feeling of the media reporting the number of confirmed cases, but not really how many more symptomatic patients there were out there who couldn’t get a test.

That was last week. But in the last couple days I’ve seen a lot of emphasis on the lack of proper protective gear for physicians. A lot of providers are coming into contact with patients who need to be tested so Covid could be ruled out. Now people are feeling like that could be anybody—they’re finding patients coming in for one reason, for example a fever and nausea, and then noting on a CT scan they also have signs of coronavirus infection.

The government and some hospital administrators are saying, “You don’t need an N95 mask,” which is the kind that protects you from airborne diseases, illnesses that are known to be passed through the air like tuberculosis. We’re told that’s not necessary, that surgical masks are sufficient. However, there’s a lot of concern and anxiety about whether that is true—or whether that’s just because there is a shortage of N95 masks. We saw that with test kits, too. The criteria for testing was very strict. Is that more of a reflection of what the supply chain is rather than reflecting what is best for care and safety of our staff?

We are all looking at the Italian experience and the Chinese experience. There are now a lot of pictures of doctors in full gear, and they have lost so many people. Obviously patients, but also in a few cases providers. In the most recent photos they are head to toe covered in gowns, with N95 masks. So here we are feeling like, we don’t understand how our government can be saying that we don’t need those masks and full coverage.

“This was one of the issues in the early part of the outbreak in other countries, the frontline was not adequately protected.”

This was one of the issues in the early part of the outbreak in other countries: The frontline was not adequately protected. And that meant that a lot of those people were either very sick or they had to be quarantined. If we don’t have proper protection, providers are going to get the disease. And then we will be in a really bad situation, because providers who are not fully trained to take care of critically ill patients will have to step up. People have been desperate to figure out ways that they can get N95s. We know that this virus is a little bit more hardy than normal respiratory viruses.

A lot of providers are being asked to be on backup duty, also to be on as providers of services that in which they’re not board certified or that are really outside the scope of their normal practice, though some hospitals are providing basic training for this. What are their legal protections to be able to say, “These are too many work hours for me”? Or, “This is not my scope of practice and I’m not comfortable”?

I’m seeing a lot of anxiety, especially from providers with young children, women who are pregnant. People in two physician households are really concerned about bringing this home to their kids and having it spread. What happens if they get sick? What happens if their spouse gets sick?

There are extensive discussions about how to decontaminate their homes. A lot of people, when they get home from the hospital are stripping, running to the shower, washing everything. A lot of people have started sleeping separately, basically quarantining themselves. They are assuming that they’ve been exposed. So they’re sleeping in the basement or another room, not seeing their kids, not wanting to risk it, which I’m sure is adding to the stress.

Someone asked yesterday in a post, what else should I be doing or thinking about? Should I be drawing up a will? And other people in the comments said they were also thinking about that. It’s just heartbreaking. One of my best friends right now is on the front lines in New York. And she’s pregnant, and she’s in her second trimester, and she is not able to wear an N95. God bless her. She’s going into work and she’s doing it openly. And she’s very levelheaded about it. She’s just like, “This is my job.”