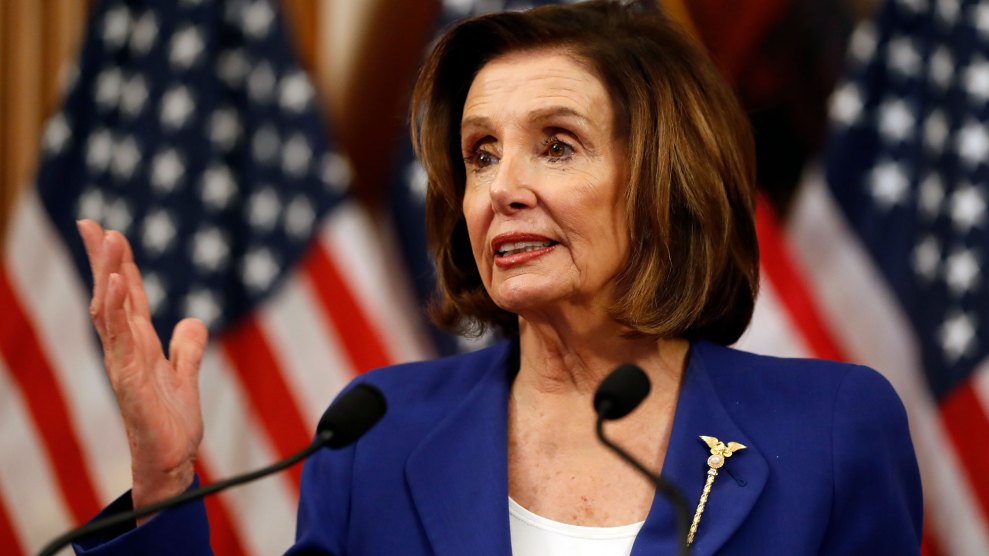 On Sunday, in her first appearance on Fox News since 2017, House Speaker Nancy Pelosi indicated that a new $400 billion relief bill could come “soon” but also slammed President Donald Trump’s “weak” response to the coronavirus pandemic for failing to put forward science-based plans to address the pandemic.

“He doesn’t take responsibility. He places blame—blame on others,” Pelosi told Chris Wallace on Fox News Sunday. “And that might have been okay before, but we cannot continue down a path that is—again, I’ll come back to science, science, science, evidence, data on how we should go forward.”

She also sharply criticized Trump’s leadership when it comes to expanding testing for COVID-19, telling Wallace, “We’re way late on it, and that is a failure. The president gets an F—a failure—on the testing.”

Pelosi on Fox News Sunday: "The president gets an F — a failure — on the testing. But Dr. Fauci is right — 'if it's done properly' — it hasn't been." pic.twitter.com/e57i1nE7lX

Her comments came as Treasury Secretary Steve Mnuchin indicated on CNN that the Trump administration and congressional Democrats could reach an agreement on yet another aid package would include $300 billion to replenish funds for a federal small business loan program that ran out last week. Mnuchin said he hoped the Senate would pass the deal—which also includes $75 billion for hospitals and $25 billion for testing—on Monday, followed by a House vote on Tuesday.