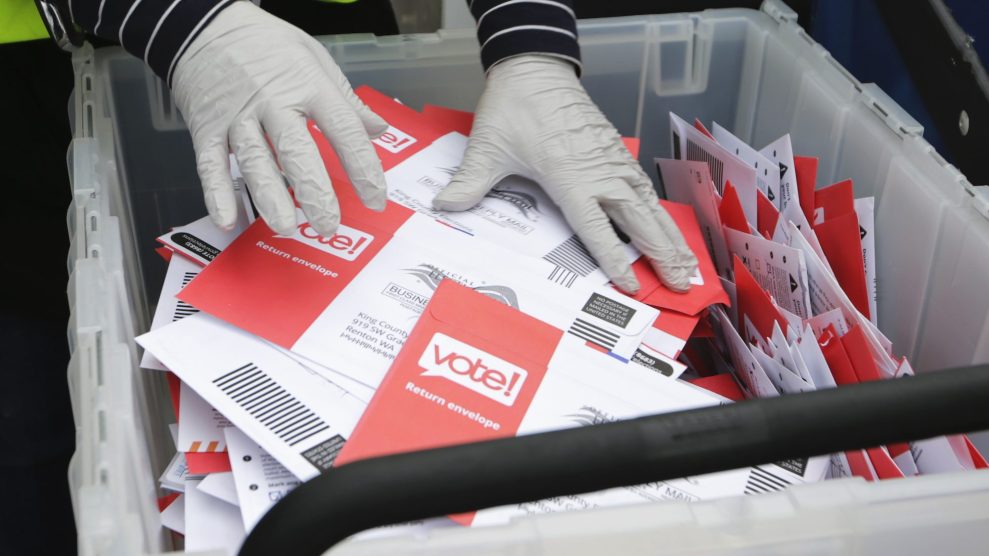 As the first wave of COVID-19 hits communities during primary season, states are still resolving how to hold elections in the middle of a pandemic. Voter advocates and organizers see the primaries as a test run, with many assuming that the November general election will also need to adapt to COVID-19. Since April, Centers for Disease Control and Prevention Director Robert Redfield, a virologist, and epidemiologists have predicted that another, potentially worse, wave of the virus will hit communities this fall and winter.

Universal vote-by-mail is being promoted by secretaries of State and voter advocates alike as a clear solution to balancing voter access and public health concerns. In this area, the West leads the way. “The crux of it is: Let’s make it as simple as possible for people to get a ballot,” said Heather Smith, executive director for ACLU of Wyoming, South Dakota and North Dakota. “Now is the time to be thinking about November and making sure that processes are in place for the least amount of disruption possible to the voting system.”

When it comes to Election Day, Western states might be more prepared to face pandemic-related election challenges than the rest of the US Most of the nation uses traditional in-person voting in a poll booth. But in 2018, 69 percent of votes in the West were cast by mail, according to the Vote at Home Institute, a nonpartisan, vote-by-mail advocacy nonprofit. That compares to just 27 percent in the rest of the nation. Of the five states that vote entirely by mail pre-COVID-19, four are in the West: Oregon has done so since 2000, Washington, Colorado and Utah joining in the last decade. And Western states that don’t have statewide vote-by-mail still have high numbers of residents who use absentee ballots. The majority of voters in Arizona, Montana and California participate in their state’s elections from afar (though California Gov. Gavin Newsom has already declared November’s election will be entirely vote-by-mail). Nevada and New Mexico also depart from tradition, with the majority casting their votes early, before Election Day.

Why is the region so different from the rest of the US? In short, it’s geography and a history of electoral reform. Western states are much larger and, generally, their populations are more dispersed than the rest of the country. Vote-by-mail has historically been decided on a county-by-county basis, making it a local government decision. Phil Keisling, the former Oregon secretary of State who helped usher vote-by-mail in Oregon in the 1990s, says that it’s popular not only among voters, but also among local election officials—a sign of its grassroots success. “This has been one of the keys of its evolution in the West: Locally elected county clerks, some elected on a partisan basis, others on a nonpartisan basis, have been at the vanguard of this approach to elections.”

“Locally elected county clerks, some elected on a partisan basis, others on a nonpartisan basis, have been at the vanguard of this approach to elections.”

The history of vote-by-mail has had its heated partisan moments, just as it does today, selectively championed by both Democrats and Republicans. In 1981 in Oregon, Linn County Clerk Del Riley wondered if he could improve the county’s election process by moving entirely to vote-by-mail, since the county already mailed sample and absentee ballots. Working with Secretary of State Norma Paulus, a Republican and the first woman elected to statewide office, they got the Republican-controlled Oregon state Legislature to agree to a test of vote-by-mail after observing a mailed election in San Diego in 1981. From there, it expanded; by 1987, all counties could conduct local elections by mail. Less than a decade later, Republican proponents decided to take vote-by-mail to back to the Legislature, this time to expand it to statewide elections. In 1995, legislation to apply it to primary and general elections statewide passed the Republican House and Senate, but Democratic Gov. John Kitzhaber, listening to state and national Democrats, vetoed it.

“There’s really no evidence that vote-by-mail favors one party over the other.”

The partisan views flipped, however, when Oregon held a special election for a US Senate seat using vote-by-mail in 1996. A Democrat, Ron Wyden, won the race, and the next time vote-by-mail legislation came up, the roles had reversed; now Democrats were the champions, and Republicans the detractors. Republican House Majority Rep. Lynn Snodgrass wrote in a 1997 op-ed that voting by mail would “destroy the integrity of the principal of why we vote in the first place,” arguing that coercion and fraud would take place. An aide to Republican House Speaker Bev Clarno (who is currently secretary of State and supports vote-by-mail) said it would help Democrats “because there are more of them.” Politics stymied the effort in the Legislature that year, but a volunteer-backed ballot initiative brought the question to voters in 1998. By then, some Oregon residents had been voting in local elections by mail for 17 years already, and the majority of voters supported it statewide. It passed. “The parties in Oregon argued back and forth about which party would get an edge from it,” said Priscilla Southwell, professor of political science at University of Oregon. “There’s really no evidence that vote-by-mail favors one party over the other.”

Today, there is bipartisan support in states that use vote-by-mail, and recent polls show the majority of Americans would support vote-by-mail elections. Because of the last two decades of successful elections in Oregon—where voter turnout is among the nation’s highest—vote-at-home advocates point to a ready-made model that other states can adapt. Still, advocates say transitioning states will need to work with tribal governments, Latino communities, rural areas and other historically disenfranchised voters to make sure there’s awareness of the changes, and that early voting and vote centers remain an option for those unable to vote-by-mail, with social distancing measures in place.

The key difference among the Western states lies in their use of either vote-by-mail or absentee voting. And the approaches vary widely:

Primary date: Aug. 4
Before COVID-19: Roughly 75 percent of Arizona voters were already absentee voters.
The plan: Instead of vote-by-mail, Arizona election officials will send out forms to registered voters to apply for an absentee ballot.
Will polls be open? Yes, though it will vary county to county.

Primary date: May 19
Before COVID-19: Voters used absentee, early voting and Election Day voting. Idahoans must show their ID when voting at the polls.
The plan: Idaho will have its first statewide absentee voting election, and voters had to request an absentee ballot by May 8. As of May 1, more than 185,000 Idahoans had requested their ballots.
Will polls be open? No. According to the office of Idaho’s secretary of State, fewer than 2 percent of the normal number of poll workers in one of the state’s largest counties were willing to facilitate the primaries during the pandemic.

Primary date: June 9
Before COVID-19: In the 2018 primary election, less than 10% of voters signed up for absentee ballots, because most either voted early or used day-of polling sites.
The plan: This spring, in response to COVID-19, the state Legislature passed a new law for universal vote-by-mail, which will send ballots to all “active” registered voters.
Will polls be open? Not traditional polling sites, but every county will have at least one vote center.

Primary date: June 30
Before COVID-19: 90 percent of voters in Utah already use vote-by-mail.
Will polls be open? No in-person voting will be available, but some counties are opting for a drive-up voting option. According to Utah’s secretary of State office, with the removal of in-person voting, voters will not be able to register at the polls on Election Day, though that has been allowed in the past.

Voting-access proponents say a universal vote-by-mail system is necessary, but note that accommodations such as increased educational campaigns are critical to make sure voters are not disenfranchised by the changes. “This is particularly true for ethnic minority groups,” said Sonja Diaz, founding director of UCLA’s Latino Policy & Politics Initiative. “Young Latinos and Asian Americans in this country are the two fastest-growing demographic groups. And they are very young in age, especially in comparison to older white voters, and that means that you’re seeing a lot of first-time voters because they’re aging into the electorate.”

“Vote-by-mail has the potential to devastate the Native vote.”

Most secretary of State offices are still closed because of COVID-19, meaning that voter registration has moved online. That’s a problem for many rural areas without access to broadband, including over 90 percent of Indigenous communities on reservations. Other barriers to Indigenous voters involve inadequate mailing services and lack of language assistance. According to Jacqueline De León (Isleta Pueblo), an attorney for the Native American Rights Fund, it’s critical that state and county election officers work with tribal governments to identify and address those obstacles ahead of the primaries and the November election. “Vote-by-mail has the potential to devastate the Native vote,” De León said, “because if you don’t have residential mail delivery, you’re not getting the ballot at your house.”

This week, US House Speaker Nancy Pelosi (D-Calif.), and House Democrats unveiled the Health and Economic Recovery Omnibus Emergency Solutions Act, the latest coronavirus relief package. The HEROES Act would provide $3.6 billion to assist states in election changes like vote-by-mail, expanded early in-person voting and same-day or online voter registration. Pelosi has cited the importance of not forcing voters to choose between exercising their right to vote and contracting COVID-19. “What country do we want to live in?” said Keisling, Oregon’s former secretary of State. “I’d rather live in a country where a lot more people are voting even when my candidates lose, than winning because we’ve lowered the turnout.”