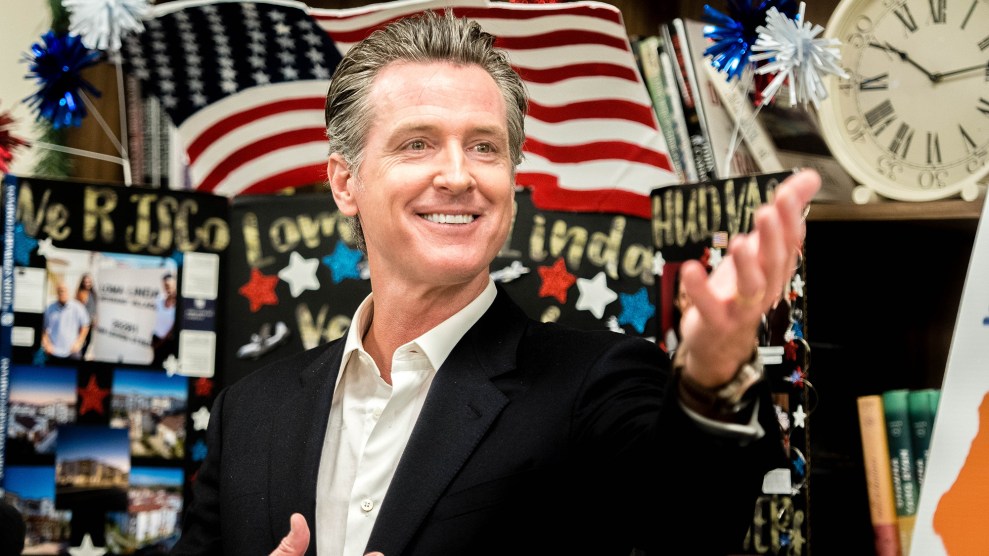 California Gov. Gavin Newsom notched a major victory for the ongoing push for increased mail voting Friday when he ordered that all of the state’s 20.6 million voters be mailed a ballot for the November elections, citing the need to balance public health concerns and the massive desire to vote this fall.

“There’s a lot of excitement around this November’s election in terms of making sure that you can conduct yourself in a safe way, and make sure your health is protected,” Newsom said Friday, according to the Los Angeles Times.

Newsom’s mandate lands amidst a major political fight over increased mail voting across the country as a means to allow people to cast ballots without having to risk gathering in long lines and small spaces to vote in person, and get poll workers sick, especially after 16 states had to delay or cancel elections in the wake of the pandemic.

The poster case for potential problems was the April 7 election in Wisconsin, which included the national Democratic primary and a contentious state supreme court race. The state’s Democratic governor tried to delay the election and allow for increased applications for mail ballots but was successfully blocked by state Republicans and the state supreme court. Public health officials in Wisconsin say there isn’t enough testing and contact tracing data to know whether the election led to a spike in coronavirus cases but, according to state data, 67 people who tested positive for the virus after the election said they had been at the polls, according to the Associated Press.

In Florida, another state that pushed forward with its primary election in March amidst coronavirus concerns, at least two poll workers later tested positive for the virus. But, again, the data available is insufficient to ascertain whether they got sick because of the election itself or contracted it somewhere else.

For months, congressional Democrats—led by Sens. Ron Wyden of Oregon and Amy Klobuchar of Minnesota—have pushed legislation to mandate all states offer no excuse mail voting for eligible voters. Local officials around the country have also called for increased access for mail voting, but have also asked for funding assistance to make the change.

Republicans have pushed back, led by President Trump who extolled Republicans to “fight very hard” against mail voting, inaccurately claiming that the practice “doesn’t work out well for Republicans” and saying the practice lends itself to voter fraud. In a Saturday tweet claiming that all elections in California are “rigged,” Trump noted that Democrats “fought like crazy to get all mail in only ballots, and succeeded.”

Democrats managed to get $400 million in election funding for states in the ongoing coronavirus relief packages, but have so far been unable to get Republicans to support vote by mail requirements, even as recent polling data suggests that a majority of Americans are concerned about voting during the pandemic and overwhelmingly support allowing those who want to the option of voting by mail.

Five states currently do elections primarily via mail ballot: Colorado, Hawaii, Oregon, Utah, and Washington. Nearly two dozen additional states allow for primarily-mail elections for specific elections, such as school board contests, or in places where the population is small and dispersed widely, according to the National Conference of State Legislatures. Every state allows for some form of voting by mail—typically known as absentee voting—but 16 states require an “excuse” to vote by mail such as jury duty or being out of state during the election. Several states have temporarily waived the excuse requirement but, as it stands, voters in the remaining states will still largely have to go vote in person in the fall, precisely when public health experts fear a resurgence of coronavirus could make the situation just as dangerous as it was this spring.

Proactively sending mail ballots to voters, even if they hadn’t applied, has been tried in other places. Adrian Fontes, the chief election official in Maricopa County, Arizona—one of the largest voting jurisdictions in the country—sought to mail all registered Democrats a ballot ahead of the state’s March presidential preference election only to be blocked by a local court. Katie Hobbs, Arizona’s Secretary of State and a Democrat, subsequently asked the state legislature to allow for primarily-mail elections in the fall but was denied. Even though the request came from the state’s bipartisan group of local election officials, Hobbs told Mother Jones the effort was blocked due to partisan Republican opposition. “We can’t just act like everything’s normal when it comes to elections,” said last month.

Hobbs said that after the defeat in the state legislature, local officials were considering mailing applications to all registered voters. That tactic was employed by several local jurisdictions in Wisconsin ahead of the April 7 election there, boosting turnout while keeping voters and election workers safe.

In California, Newsom’s mandate will take some work. Elections are already complicated, and ramping up to primarily-mail elections is even more complicated and, at best, takes months of lead time and coordination between vendors, local election officials, and state officials, not to mention sustained public education efforts. California, though, is better poised than other states to pull this off because 14 of the state’s 58 counties already mail ballots to every registered voter, the Times noted.

Still, there are concerns. In Los Angeles alone, 2 million voters will now become mail voters, according to the plan. Kim Alexander, the president of the California Voter Foundation, told the Times that elections were already “unfunded mandates” and that “this is going to be an even bigger expense for counties.”

While mailing in ballots should be easier for most Californians, there are plenty of groups who would struggle with reductions to in-person voting: disabled voters who need assistance or special equipment to mark their ballot, young people and some minority voters who tend to have more transitory addresses. The Times reported that Newsom’s plan doesn’t have specific rules for counties to operate in-person voting locations, but Joseph Holland, registrar of voters in Santa Barbara County and president of the California Association of Clerks and Elections Officials, told the paper that counties need flexibility to deal with public health concerns as they exist in the fall, and that there will be in-person voting options. Newsom also said that he envisions “the appropriate number of physical sites” for voting in the fall.