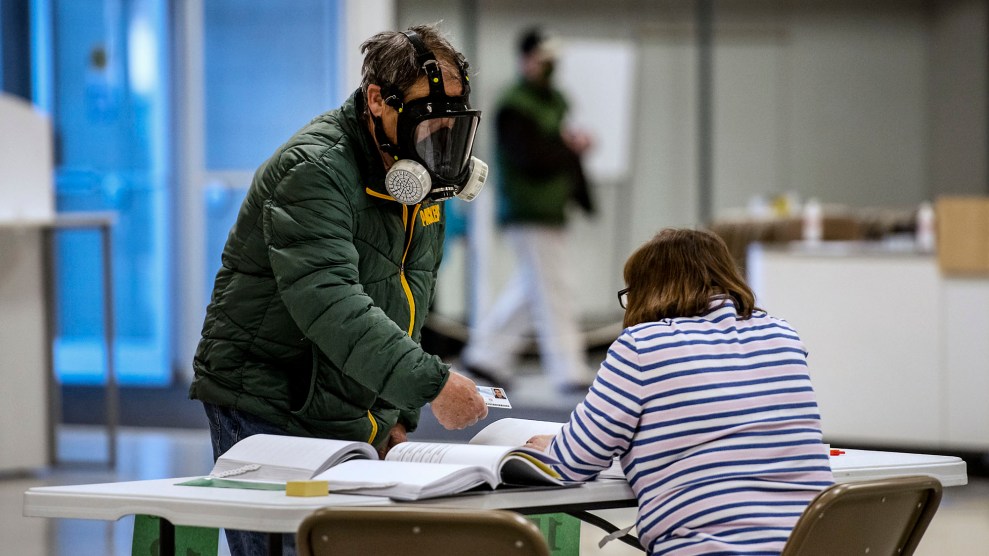 A voter wears a full face chemical shield to protect against the spread of coronavirus, as he votes Tuesday, April 7, 2020, in Janesville, Wisconsin.Angela Major/The Janesville Gazette/AP

Despite most of the country being under lockdown to prevent the spread of COVID-19, Wisconsin is going ahead with in-person voting today. The state’s Democratic governor, Tony Evers, who defeated Scott Walker in the 2018 midterms, tried to delay the election and switch to absentee voting, but he was stymied by the GOP majority in the state legislature, the Republican-controlled state Supreme Court, and even the US Supreme Court. So Wisconsinites who didn’t request an absentee ballot in time will have to trek to a physical polling location—which is certain to be more crowded than usual because the state has sharply reduced the number of polling places, given the pandemic.

Back when Scott Walker was in charge, Republicans implemented a host of voting restrictions and gerrymandered the state so thoroughly that a federal court said the redrawn maps violated the voting rights of Democrats. As my colleague Ari Berman wrote in 2017, those anti-democratic measures might have been the pivotal factor that tipped the state to Donald Trump in the 2016 election. Those voting restrictions are still on the books, and their absurdity is only heightened in the age of social distancing, as Tuesday’s election shows.

On Sunday, Madison, the state’s second-largest city, put out a guidance for how the election would unfold, including urging voters to keep a safe six feet apart and assuring them that it’s okay for them to bring their own pens. The city offers a quasi-drive-thru voting system for people with underlying health issues, allowing them to get a ballot at the curb, but certain precautions must be observed: “Crack your window open just enough to receive your ballot from the poll workers.”

But the instructions for enforcing the voter ID restrictions are the most, um, eye-catching. “Poll workers have been instructed to verify the identity of a voter wearing a facemask by comparing the eyes in the voter’s ID to the eyes of the voter before them. Poll workers should not ask voters to remove their facemasks.”

Instances of the kind of in-person fraud that would be caught by voter ID laws are vanishingly low in normal circumstances, and it’s even harder to fathom people choosing to subject themselves to repeated exposure at a polling place during a pandemic. But the laws, which disenfranchise Black voters at far higher rates than their white counterparts, still exist, forcing poor poll workers to stare deeply into voters’ eyes to assess if it’s truly them in their ID.