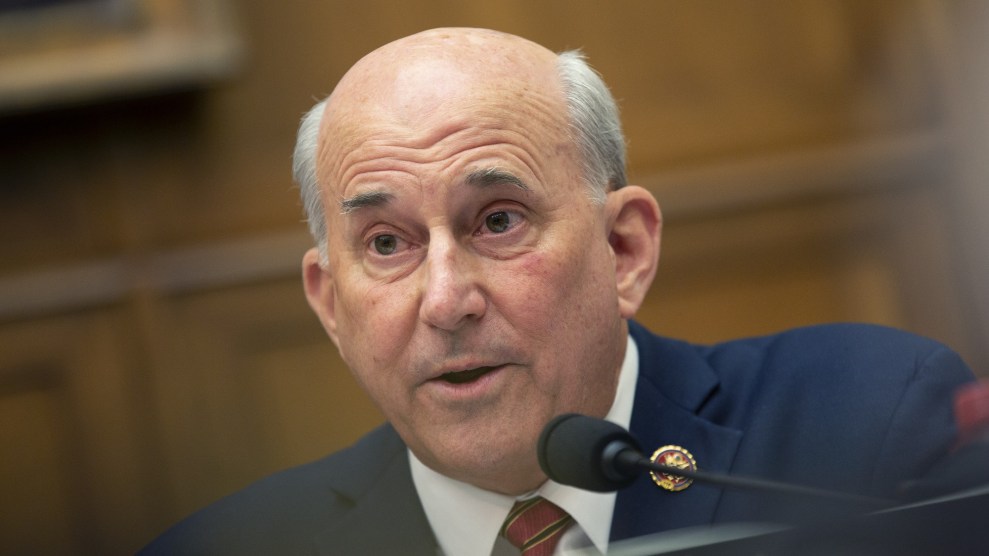 Rep. Louie Gohmert, a Texas Republican who for months has steadfastly not worn a mask nor maintained social distancing in the halls of Congress, has tested positive for COVID-19, according to multiple sources. Gohmert was scheduled to fly with President Donald Trump to Midland, Texas on Wednesday to attend a fundraiser and tour an oil rig. According to CNN, Gohmert tested positive for COVID-19 during a pre-flight screening at the White House and is now not joining the president’s convoy to Texas.

Even among Republicans, Gohmert stands out as one of the few who refuses to wear a mask when not mandatory (House rules mandate that all members of Congress must wear a mask during in-person committee hearings). On Tuesday, Gohmert attended two House hearings, including the judiciary committee’s hearing with Attorney General William Barr. Prior to the hearing, Gohmert was captured on video walking with Barr, both men unmasked. Politico reports that Barr will be tested for COVID-19 at some point Wednesday.

ACTUALLY… here is a video of AG Barr and Gohmert.

While Barr arrived with a mask, it was off when he walked into the hearing room, so both men were not wearing masks at this time. pic.twitter.com/xm6wuq6QvW

In June, Gohmert tried to explain why he doesn’t where a mask, giving CNN an answer that “defied the science and the recommendations of leading public health experts.” But he said that if he were to get coronavirus, “you’ll never see me without a mask.” After learning that he had tested positive for COVID-19, Gohmert told his staff the news in person. It’s unclear if he was wearing a mask.

In an email to Politico‘s Jake Sherman, an aide in Gohmert’s office said that the Texas congressman requires his all of his staff to work in his Washington, DC office so they “could be an example to American on how to open safely.” Gohmert also allegedly berated his staff for wearing masks.

PLAYBOOK PM: After we reported that @replouiegohmert was positive, we got an email from a Gohmert aide. pic.twitter.com/x31CSOdkLf