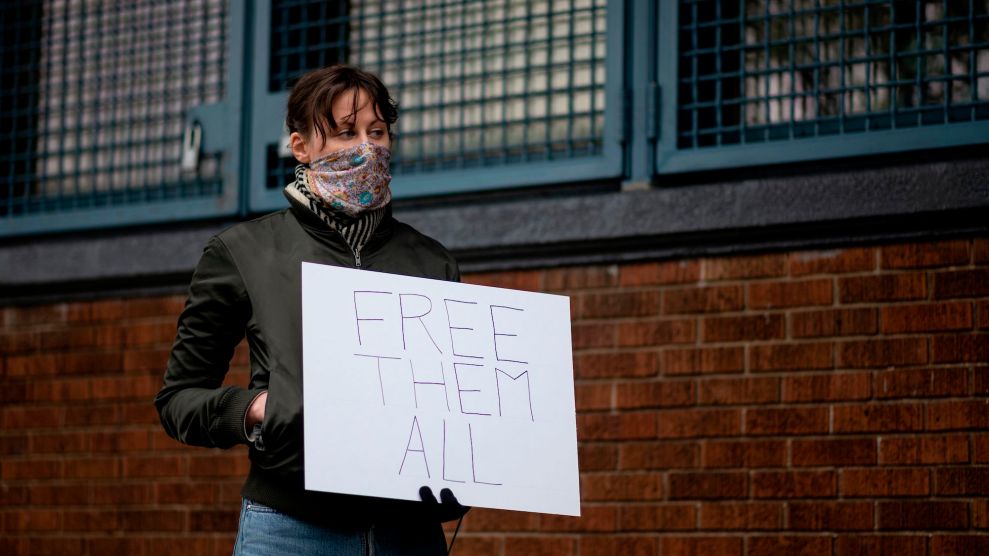 A woman wearing a mask takes part in a vigil outside Queensboro Correctional Facility on April 23, 2020Johannes Eisele/Getty

A new poll indicates widespread public support for releasing some prisoners early to slow the spread of COVID-19, which has rapidly spread through prisons and jails, killing incarcerated people at twice the rate of people outside.

The poll, conducted by Data For Progress, a progressive think tank, and The Appeal, a policy research outlet, and published today, was based on an online survey of more than 1,110 likely voters. Most said they supported releasing elderly people, people charged with low-level offenses or with less than six months remaining on their sentences, and people with medical conditions that put them at higher risk of complications from COVID. Nearly two-thirds of respondents, including more than half of Republicans, believe the police should be booking fewer people into jails.

The results line up with those of similar polls from last spring that found widespread support for early releases as a way of controlling the spread of the coronavirus and limiting its impact on people in federal and state custody.

Republicans were far more likely than Democrats to oppose early release for people in prisons and jails. Just 37 percent of Republicans supported releasing prisoners who do not pose a threat to public safety and have medical conditions like cancer or lung disease.

The poll results point to strong public support for releasing elderly prisoners, who have extremely low recidivism rates. Sixty-three percent of respondents approved of releasing them if they did not pose a serious risk to public safety—including half of Republicans. Governors in several states, including Michigan and Maryland, have taken executive actions to prioritize older prisoners for release.

The onset of the pandemic did more to quickly reduce the US prison and jail population than any other development in recent history. Nationally, the prison and jail population fell 14 percent between 2019 and mid-2020—from 2.1 million to 1.8 million incarcerated people, according to a recent report from the Vera Institute of Justice. The decline in prison population appears to be mainly the result of fewer people being sent to prison, rather than early releases, according to an analysis by the Prison Policy Initiative. The dramatic drop in jail populations in the first half of 2020 was the result of releasing pretrial detainees and booking far fewer people in the first place.

According to the poll, measures like issuing tickets and summons rather than arresting and booking people into jail are supported by nearly two-thirds of voters, including a majority of Republicans.

Since the middle of 2020, jail populations have been rising again—the result of a complicated mix of factors including court delays, a pause on transfers of sentenced people from jails to prisons, and a backlog of people facing felony charges who were not deemed eligible for pretrial release. Some police departments have already abandoned the alternatives to jailing people that they adopted at the beginning of the pandemic. As early as last May, Philadelphia police resumed arresting people for nonviolent property crimes, rolling back a policy of briefly detaining and fingerprinting suspects before releasing them until charges could be filed later.

More than 1.8 million people remain locked up in the United States. More than 570,000 incarcerated people and prison and jail staff have tested positive for COVID-19, by the New York Times’ count. At least 2,500 have been killed by the virus.