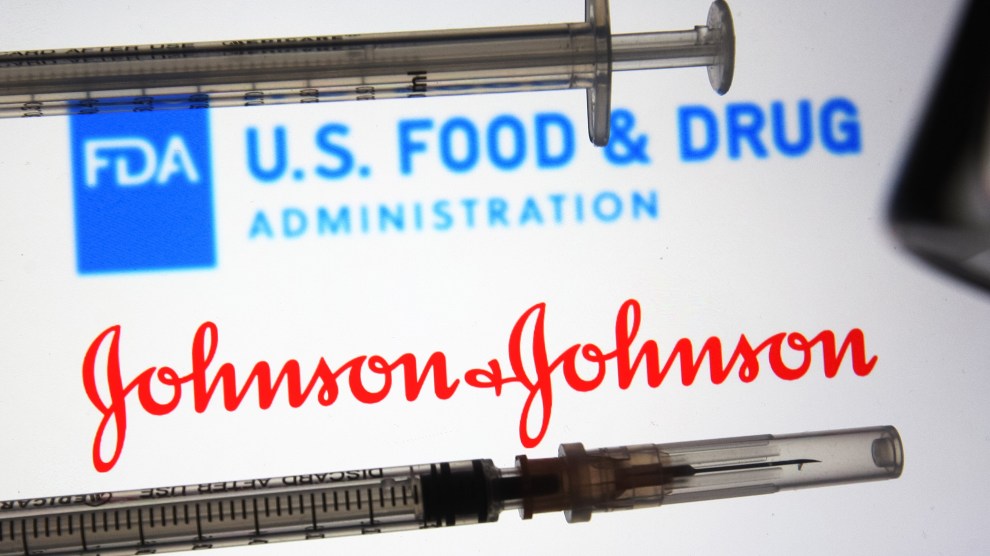 Today, the Food and Drug Administration recommended a “pause” in the use of Johnson & Johnson’s vaccine after six women who ranged in age from 18 to 48 reported suffering from a severe form of blood clot after receiving the shot. The news was a major blow to the Biden administration’s vaccination efforts: The J&J shot, which is highly effective, requires only one dose, and needs no specialized storage, has been given to nearly 7 million Americans so far.

Some media observers have wondered whether the pause will do more harm than good: The shot’s reputation will be permanently tarnished, they argue, over a side effect that is vanishingly rare. “I think it’s important though that there *hadn’t* been a particular public/media panic about blood clots and the J&J vaccine, at least not yet,” tweeted journalist Nate Silver. “So the FDA is sort of creating a Streisand Effect and giving these concerns more salience.” (“Streisand Effect” refers to a situation where a cover-up makes things worse.) Others opined that given the extreme rarity of the blood clots, the pause was overly and unnecessarily cautious. “On the general subject of abundance of caution, this paper finds 5.84 deaths per 100,000 induced by aging into legal driving age,” tweeted journalist Matt Yglesias.

But these criticisms miss an important point: the critical role of transparency as a public health tool. My reporting on vaccine hesitancy and public health messaging has taught me that trying to hide bad news from the public not only doesn’t work but is seriously counterproductive. As infectious disease expert Monica Gandhi told me last week, we learned during the HIV/AIDS epidemic that people thrive when they have access to nuanced and accurate information. We learned from other vaccine rollouts that downplaying side effects has a way of coming to back to bite you. For example, in 2002, when the George W. Bush administration rolled out a smallpox vaccine, it sought to downplay rare but serious side effects, which included potentially fatal inflammation of the heart. Naturally, the news got out anyway. The result was that the administration ended up vaccinating just 10 percent of its goal.

It’s easier to imagine what the cost of a “nothing to see here!” approach would be if we look at some scenarios of how it could actually play out. Suppose the federal government tried to downplay the instances of blood clots so far, and vaccination sites continued to use the Johnson & Johnson vaccine. Perhaps the clots would remain truly rare, the rollout of the shot would continue to work as planned, and the American public would be none the wiser.

Another possibility is that the clots would keep happening at the current (extremely rare) rate. It would only be a matter of time before people who are skeptical of the vaccines would point out that the government had covered them up. This outcome would inevitably foment a certain amount of distrust among some Americans.

“When the government doesn’t share with the public, in the long run, this becomes problematic, because people lose trust.”

A very bad possible outcome would be that because of widespread news coverage of the blood clots, the American public would perceive them as a far more common side effect than they actually are. In this case, we could also expect that blood clots that are not connected to the vaccine—the kind that are relatively common in people who have traveled on long plane trips and somewhat common in smokers and people who take hormonal birth control—would be incorrectly attributed to the vaccine. The incidence of the clots would then appear to be dramatically higher than it actually is—and it would make the government look incredibly irresponsible in failing to intervene. In this nightmare scenario, perhaps reports of blood clots after the Pfizer and Moderna shots would also start cropping up, and the public’s trust in a miraculously effective public health tool would be forever damaged.

Saad Omer, a Yale University epidemiologist and infectious disease expert who studies vaccine hesitancy, told me he also thought the pause made sense. He said the government needed time to assess risk factors. Also, it was important to make sure that clinicians knew how to recognize the symptoms of these blood clots—which require different treatment from the most common kinds of blood clots—and  how to treat them. Omer also emphasized the importance of transparency. “When the government doesn’t share with the public, in the long run, this becomes problematic, because people lose trust,” he said. “We saw that during this outbreak, when the government tried to downplay the severity of the disease.”

Other public health experts are also expressing support for the pause. “Pausing to investigate this is the right thing to do. Clinical trials get paused for the same reason,” tweeted Georgetown University virologist Angela Rasmussen. “This is the regulatory system working as it is supposed to.” Leana Wen, Milken Institute School of Public Health at the George Washington University, tweeted, “This is exactly the right move. All possibly concerning safety signals should be immediately & transparently investigated.”

A very good question to ask is if this pause will have some serious consequences for our vaccine rollout. Even if it’s just a few days, highly transmissible variants are driving case counts up in many states. Most experts believe that our only way out of a crushing fourth wave, is robust vaccination. It’s true that the timing of the pause isn’t great, but it may be smarter to sacrifice short-term rollout speed to build long-term trust in the government’s vaccine messaging. If the public begins to lose faith in the COVID-19 vaccines overall, the fourth wave will certainly not be the last.