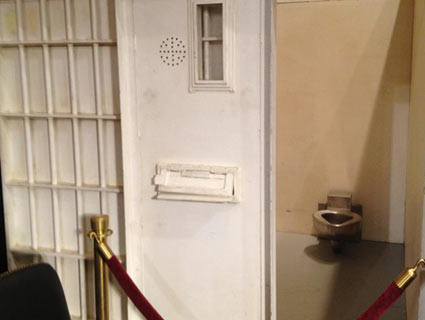 A mock solitary cell erected for a recent Senate hearing on the subject.Dolores Panales

Fans of James Ridgeway, our stalwart senior correspondent, already know of his deep interest in a topic that most Americans prefer not to think about: America’s routine use of long-term solitary confinement in its jails and prisons. An estimated 80,000 Americans are held in some form of solitary, he reports, despite evidence that it has profound negative physical and psychological effects on people and does nothing to make prisons safer—one of the primary rationales for its continuing use.

Among Ridgeway’s Mother Jones articles and posts on the topic is the story of Troy Anderson, a mentally ill prisoner who has spent years in solitary with no end in sight; this recent check-in on the two remaining members of the so-called Angola 3—men who have spent 40 years in solitary because Burl Cain, Angola Prison’s notorious leader (whom Ridgeway profiles in “God’s Own Warden“), was angered by their political rabble-rousing; and a Q&A with Sarah Shourd, one of three American hikers who were captured by Iranian soldiers in 2008, accused of spying, and put in solitary for 14 months. You can browse all of Jim’s articles on his author page.

In this clip, Nick Gillespie, editor of Reason.com and Reason.TV speaks with Ridgeway about his reporting for us and for the specialty blog Solitary Watch.