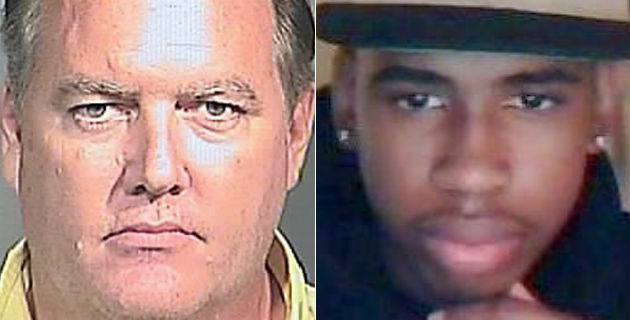 Update, October 17, 2014: On Friday, Michael Dunn was sentenced to life in prison without the possibility of parole for the murder of Jordan Davis.

A white man named Michael Dunn shot and killed an unarmed black teenager named Jordan Davis in Florida last year after a brief dispute. The prosecutor overseeing the case is Florida state attorney Angela Corey. Dunn, who will be tried for murder, claims the shooting was in self-defense. Sound familiar?

Now that the state’s nationally televised and notorious self-defense case has ended with the acquittal of defendant George Zimmerman, a next potentially high-profile test of the state’s criminal-justice system may come when Dunn goes on trial for first-degree murder this September. And while Florida’s controversial Stand Your Ground gun law wasn’t invoked during the trial (although it did factor into the jury’s decision, according to one juror)*, it may be tested in the Dunn case.

The killing took place in November 2012, while Dunn was parked at a gas station convenience store, waiting for his girlfriend to emerge from inside. Four teenagers, including 17-year-old Davis, were parked* next to Dunn’s car in an SUV. After an argument over the teens’ loud music, Dunn fired on the boys from his car, killing Davis. Dunn claims he opened fire only after one of the teens threatened his life, brandished a gun, and started to exit the SUV. Later he told police that he had “never been so scared” in his life.

The Davis family attorney, John Phillips, told HLN recently that Davis’ parents are “freaking out about justice” after the Zimmerman verdict. But in another HLN interview, he cautioned that the two cases aren’t identical, saying “the justice process is different for both. You gotta keep them separate.”

He’s right—there are some crucial distinctions. No one but Zimmerman and Martin himself bore witness to Zimmerman pulling the trigger. But there were several eyewitnesses to the Davis killing, including his three friends who survived. Despite Dunn’s claim that one of the victims had a gun, police recovered no weapon, and witnesses say no one involved got out of a vehicle except for Dunn, who allegedly did so as he fired his final shots. Instead of calling 911 or waiting for police to arrive, Dunn then fled the scene with his girlfriend, went back to his hotel and ate pizza, and later returned to his home without calling police. Whereas Zimmerman walked free for nearly six weeks and was only arrested and charged after a national outcry, police arrested Dunn the day after he killed Davis.

Corey has been under fire over the outcomes of two self-defense cases she recently oversaw. Since the Zimmerman verdict, some critics have blasted her for charging him in the first place, while others argue that her team didn’t present the case against him effectively. Zimmerman’s case has been likened to another one handled under Corey in 2012: that of Marissa Alexander, a black woman who tried to use Stand Your Ground as her defense against aggravated assault charges. She said she fired a warning shot into a wall to fend off her abusive estranged husband; she was sentenced to 20 years in prison for aggravated assault with a deadly weapon. Corey claims there are “zero parallels” between the two cases.

In the upcoming Dunn trial, the issue of race is obvious to Davis’ mother, Lucia McBath, but she told HLN’s Raising America recently that it should not be the main focus.

“It’s apparent that Michael Dunn is white, it’s apparent that Jordan is black,” McBath said. “But the issue is the Stand Your Ground laws. The issue is not the racial part of it. We’re not going to center and focus on that, because that doesn’t do any good for the country. We’re not going to incite racism in this country. The bigger picture is making a change in the laws so that…this doesn’t continue to happen.”

*Correction: The original version of this article mistakenly stated that “stand your ground” did not factor into the Zimmerman trial. It also stated that the vehicle Jordan Davis was in pulled up next to Dunn’s car. It was already parked there when Dunn arrived.