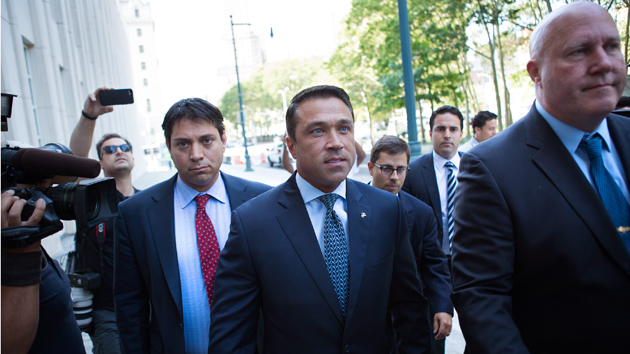 Former Rep. Michael Grimm (R-N.Y.), the Staten Islander best known for threatening on-camera to “break” a reporter “in half—like a boy,” has been sentenced by a federal judge to eight months in prison for tax evasion.

The sentencing, by US District Judge Pamela Chen, comes seven months after Grimm pleaded guilty to his role in filing a false tax return. Grimm had been indicted in April 2014 on 20 counts related to accounting practices at Healthalicious, a Manhattan restaurant he owned before his time in Congress. The restaurant’s co-owner, Bennett Orfaly, has previously been accused of having ties to a convicted Gambino family mobster.

Despite his indictment, last year, Grimm ran for reelection to his third term in Congress—and won. It was not until December 30—seven days after entering his guilty plea—that he announced his intentions to resign his seat.

Before Grimm was the target of an investigation by the FBI, he served for two decades as one of its agents. It was during this time that Grimm reportedly pulled a gun in a Queens nightclub, and, after a bouncer ejected him, stormed the nightclub with another FBI agent and members of the NYPD. “I’m a fucking F.B.I. agent,” Grimm reportedly said. “Ain’t nobody gonna threaten me.”