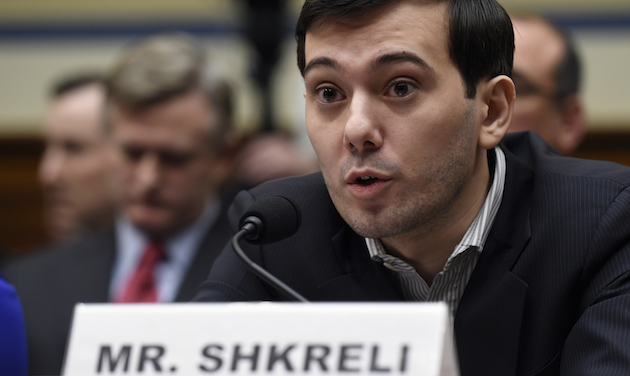 Martin Shkreli, the former pharmaceuticals executive who sparked national outrage after it was discovered he price-gouged a drug by more than 5,000 percent, appeared before the House Oversight committee on Thursday for a hearing on pharmaceutical pricing. When members of the committee asked him about the price-fixing that led to a federal investigation of his company, Shkreli repeatedly invoked his Fifth Amendment privilege “against self-incrimination” and refused to answer.

He instead let his smug smile speak for itself, while Rep. Elijah Cummings (D-Md) described the struggles of his constituents to pay for their medicine.

At one point, Rep. Trey Gowdy (R-S.C.) asked Shkreli how to pronounce his name, to which he received a rare response. Gowdy then said, “See, there you can answer some questions—that one didn’t incriminate you!”

Gowdy continued, “I just want to make sure you understand you are welcome to answer questions and not all of your answers are going to subject you to incrimination. You understand that, don’t you?”

“I intend to follow the advice of my counsel,” Shkreli replied. “Not yours.”

Shkreli, who was once labeled the “most hated man in America,” repeatedly invoked the Fifth Amendment, even when he was asked what he would say if given the chance to speak to people with HIV/AIDS who were unable to purchase the drug Darapim after his dramatic price hike. He also refused to discuss his $2 million purchase of a Wu-Tang clan album.

Shkreli’s choice to remain silent comes after weeks of defiant Twitter rants and a bizarre diss video aimed at Ghostface Killah, after the rapper publicly mocked him:

After he left the hearing on Thursday, however, Shkreli started communicating and posted this on Twitter:

Hard to accept that these imbeciles represent the people in our government.