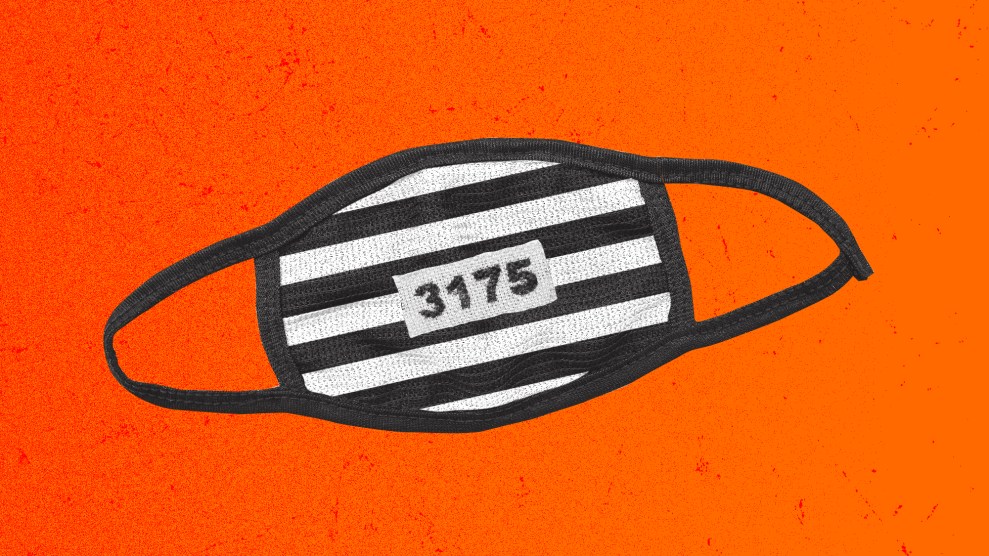 Hunched over a sewing machine at a prison in upstate New York in late April, Jordan Stevens had one wish: He wanted to keep one of the masks. He’d been working seven days a week, earning pennies per hour, to sew surgical masks for correctional officers, sick and quarantined inmates, and hospital workers. Stevens, who requested that we not identify his real name or location for fear of retaliation from prison officials, has a compromised immune system that would make him especially vulnerable to complications if he caught the coronavirus. The virus has already sickened at least one other person in the prison.

But when Stevens asked for permission to take one of the masks back to his cell, a correctional officer refused, and told him he would have to tie a state-issued handkerchief around his face instead. The experience was “very degrading,” Stevens said in a recent call with his attorney, who relayed parts of the conversation to me.

People in New York prisons have sewed at least 371,000 cloth surgical masks since the start of the pandemic.

In March, as New York City became an epicenter for the pandemic, Gov. Andrew Cuomo announced that prisoners in the state were bottling hand sanitizer for New Yorkers after the product disappeared from most store shelves. The news quickly drew backlash from criminal justice reform activists around the country, who argued that incarcerated people receiving low wages should not be working on the production line because they live in crowded facilities where social distancing is next to impossible—putting them at high risk of contracting the virus. Some prisoners were ultimately allowed to use the hand sanitizer.

But meanwhile, incarcerated people in New York have sewed at least 371,000 cloth surgical masks for correctional officers, sick inmates, first responders, people in nursing homes, government officials, and doctors and nurses in hospitals—while often being denied access to these same masks themselves.

“To have incarcerated New Yorkers making PPE for us on the outside, while depriving them of those very same masks, is beyond draconian,” says David Loftis, a lead attorney at the the Legal Aid Society, which offers legal services to inmates around the state and has filed lawsuits trying to secure the release of some who are especially medically vulnerable.

Ever since the Centers for Disease Control and Prevention recommended that all people start covering their faces in public spaces as a precaution against the virus, prisoners in a vast majority of states have gone to work sewing masks, even while dealing with some of the country’s worst outbreaks in their facilities. Seven of the 10 biggest clusters for the virus in the United States are in detention centers, according to an analysis by the New York Times. And infections don’t tend to stay inside prisons—guards can spread the virus back out to the community. New York prisons have logged at least 407 cases among incarcerated people and 1,129 among staff, and at least three incarcerated people have tested positive at the two facilities where the corrections department says inmates are sewing masks. These numbers would likely be significantly higher if more people in prisons were tested, health experts say.

While New York is not alone in asking inmates to produce hand sanitizer and face coverings, it’s among a small minority of states that do not provide all people in prisons with masks. In at least 42 states, corrections departments have given cloth masks or surgical masks to everyone working or living in state prisons, according to a survey of policies conducted by Mother Jones. (Washington state provides face coverings that consist of bandannas, rubber bands, and coffee filters, plus a tutorial to assemble them. Two state corrections departments did not have their policies posted online and did not respond to requests for clarification.)

But New York, an epicenter of the pandemic, only provides surgical masks to inmates who test positive for the virus or are quarantined, along with those who are in the middle of work shifts in the mess hall or on other jobs where social distancing is difficult, including in the sewing room. At least four other states—Nevada, Delaware, Rhode Island, and New Hampshire—only provide masks to certain inmates.

Inmates in New York’s general population units rely instead on prison-issued handkerchiefs, cotton and polyester squares measuring 14 inches by 14 inches. The CDC website states that bandannas qualify as safe face coverings. But most bandannas measure at least about 20 by 20 inches, significantly larger than the handkerchiefs. The CDC adds that people who cover their faces with bandannas should fold the fabric into multiple layers, ensure it fits snugly against the face, and secure it with ties or ear loops to make sure it’s effective.

People in prisons across the state have complained that the handkerchiefs are too small to tie around their faces, and that the corrections department won’t allow them to use hair ties or rubber bands to fasten the fabric, according to Martin Garcia, who communicates with people in prisons as part of his advocacy work at Worth Rises, a criminal justice reform group. “They’re too small and wholly inadequate,” says Dave George, who speaks with incarcerated people daily for his work with the reform group Release Aging People in Prison (RAPP). Unable to wrap the fabric around their heads, some people are now simply holding it up to their faces, or holding up other clothing to cover their mouths. An incarcerated man at Sing Sing Correctional Facility has been hand-sewing masks in his cell using T-shirts and elastic cut from underwear, in an attempt to help inmates who aren’t able to keep the handkerchiefs in place, according to a HuffPost report.

A spokesperson for the New York Department of Corrections and Community Supervision said people incarcerated in the state’s prisons receive masks in accordance with guidelines from the state health department and the CDC. “The Department is also working with one of its partners on issuing cloth masks to every incarcerated individual in the coming weeks,” the spokesperson says. He did not say why the department did not already provide masks to all of them. He added that incarcerated people are allowed to own hair ties and rubber bands. But when asked whether they are permitted to fasten their handkerchiefs with these materials, he responded in an email, “We are unaware of this being an issue.”

While prisoners earn pennies per hour, the state generates $30-$40 million in revenue annually from Corcraft sales.

The New York inmates who sew masks work for Corcraft, a state-owned business that manufactures everything from furniture to license plates and now hand sanitizer for outside state agencies. The starting wage is just 16 cents an hour, but incarcerated employees can work their way up to 65 cents per hour, with a $1.30 bonus for hitting certain performance targets. According to the corrections department spokesperson, it’s one of the best-paying jobs available to inmates in the state, who need money to call home or buy food and toiletries from the commissary. While prisoners earn pennies per hour, the state generates $30-$40 million in revenue annually from Corcraft sales to other state agencies, according to public records obtained this year by criminal justice reform groups.

In some ways, Stevens feels safer at work than he does elsewhere in prison: He’s allowed to wear a surgical mask as long as he’s in the sewing room. He shares his machine with one other person, and they’re careful to wipe it down in between uses. But when he returns to the housing unit in the evenings, he feels the anxiety return. “I have to use the phone, the kiosks, everything that everyone else is using,” he says. It’s hard to avoid other inmates in the mess hall, some of whom choose not to wear a handkerchief at all.

When he talks on the phone with his sister, she begs him to stay in his cell as much as possible. He tries not to even venture out to the yard for fresh air unless the weather gets unbearably hot. The prison is not conducting daily temperature checks for all inmates or widespread testing of asymptomatic people. In other states that have done mass testing behind bars, huge majorities of inmates at some prisons have tested positive; at one Ohio facility, around three-quarters did, and most were asymptomatic.

Stevens was not forced to work on the mask production line; he says he chose to take the job because he didn’t have much else to do, and because he wanted to help during the pandemic. Governor Cuomo has emphasized the importance of wearing masks as a civic duty: “Stopping the spread is everything,” he said during a daily press briefing in Albany. “How can you not wear a mask when you’re going to come close to a person?” On Sunday, Cuomo emphasized that hospitals in the state are now required to keep at least a 90-day supply of personal protective equipment, and he described prior shortages as a national security issue. “You can’t be dependent on China to have the basic equipment to save lives in the United States,” he said during a briefing.

But should people in prisons, who are at high risk during the pandemic, be the ones to help fill the gaps? By neglecting to protect the inmates they employ, RAPP’s George argues, Cuomo and the state prison system “have shown they value the lives of some people more than others.”