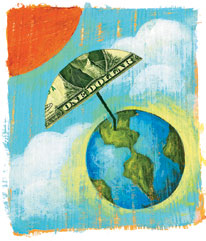 Eight years ago in Austin, Texas, pio­neering climate economist Eban Goodstein drew a thin crowd speckled with hecklers, whose buttons demanded, “Show Me the Science!” When he returned this year, the deniers were gone, the room packed, the mood serious. Thanks to Al Gore, people get the science. Now, they want to know what to do.

To this, Republicans in Congress answer: nothing. House Minority Leader John Boehner (R-Ohio) has appointed six members to the new climate change committee. Most of them had been global-warming skeptics; now they’re policy skeptics. As Rep. John Shadegg (R-Ariz.) stated: “We must be careful not to enact policies that will unnecessarily impose a financial burden on American families.” Their new button reads: “Show Me the Economics!”

The British government’s Stern Review Report on the Economics of Climate Change is the place to turn for a deep seminar on such matters. Up front, we find these simple words: “Climate change presents a unique challenge for economics: It is the greatest and widest-ranging market failure ever seen.” The Stern Review outlines the economic costs of climate change (declining food and water supplies, coastal flooding, storm damage, the extinction of up to half of all land species), the distribution of those costs (to be borne most acutely by poor subsistence farmers), and the economic ethics of why the rich must act to help the poor and why the present must act to protect the future.

Climate-policy skeptics love to dwell on questions like these. To them, the cost of any policy weighs heavily because we pay that cost now, while the benefits will come later and accrue to others. Why, they ask, should we sacrifice in order to help future generations, who will have all the benefits of technical progress and economic growth yet to come? Because, as the Stern Review makes clear, if CO2 isn’t stabilized soon, then catastrophe is certain. And extinctions and sea-level changes cannot be reversed by the wealth that might be created in the next 50 years. Facing the judgment of history, no ethical standard entitles us to condemn the future to a hot, dry, famished, and flooded world. For this reason, we must treat the costs and burdens of climate change as if they are already falling on us.

And that’s the rub: They aren’t. The market’s real failure is that it allows for no signal from the future to the present, either from the conditions that will exist 30 years hence or from the people who will be alive and working then. The question becomes: Can we really create a market in which those far-off voices are effectively heard?

Mainstream climate change economics assumes so. “Establishing a carbon price, through tax, trading or regulation, is an essential foundation for climate-change policy,” the Stern Review posits. This makes some sense. After all, markets and taxes encourage cheap solutions, and there is plenty of low-hanging fruit. For a start, why not replace state sales and federal payroll taxes with carbon taxes? A cap-and-trade system would lead industry to use low-emissions technologies more and high-emissions technologies less. Business leaders are rallying behind a “carbon price.” Fine. Give it to them.

But is tinkering with the market enough? According to the Stern Review, stabilizing atmospheric carbon at 550 parts per million requires cutting total emissions by a quarter by 2050, in the face of population and economic growth. Many experts, including nasa‘s top earth scientist, James Hansen, favor even more drastic reductions. Goodstein simplifies bluntly: We have 30 years to get the gasoline out of cars and the coal out of power plants, a goal beyond the power of markets.

Market policies rely on competition, and are responsive only to prices. But corporations such as ExxonMobil and txu like to run the world as they see fit. Should we guarantee to them the kind of profits they earn in a carbon-based energy world, as carbon pricing might do? Can they be trusted to invest those profits correctly? No. A real climate solution must shrink some industries and grow others, and that means changing the distribution of profits. Exactly how is something we need to plan.

“Planning” is a word that too many in this debate are trying to avoid, fearful, perhaps, of its Soviet overtones. But the reality of climate change is that central planning is essential, and on a grand scale. It would start with tens of billions of dollars in research to determine what is feasible, what is socially tolerable, and at what cost. A National Institute for Climate Engineering would be a good start. Departments of climate engineering at major universities would follow. Presidential candidates should take the lead by proposing a cabinet department of climate planning.

What then? Which new technologies would get taken up and how quickly? Part of the answer is public investment, big-time—in cities and the ways they use power, in transportation and the energy used for it. Mandatory changeovers in technology would follow. Fuel efficiency, building efficiency, urban density, transportation modes, and requirements for renewable energy must all be part of the mix. Cities from Austin to New York, and states—notably California—are already leading the way. But the laggards—Texas emits more carbon dioxide than California and New York state combined—will determine whether carbon emissions are sufficiently reduced.

So the real test will be whether national decisions are made and enforced. Mandates force the pace of technical change, lower unit costs, and help businesses with their own plans for technical transitions. Plans provide clarity and reduce risk, an essential step in making things happen. Of course, planning can be authoritarian, and planners make mistakes. Much of what goes into a national plan, especially at first, may be wasted. But so what? Waste and inefficiency are part of human endeavor, and markets do not protect against them.

It’s our job, too, to blaze trails for the rest of the world. As Al Gore said before Congress on March 21: “The best way—and the only way—to get China and India on board is for the U.S. to demonstrate real leadership.” This is a worthy mission. Hostile to central planning though we are, we are ironically the only country with the capacity to plan and to change on such a scale. We are also the only country empowered by the world—through its willingness to hold our debts at low interest rates—to pay for it. And we are the only country that can concentrate the scientific, technical, and economic talent necessary to pull it off.