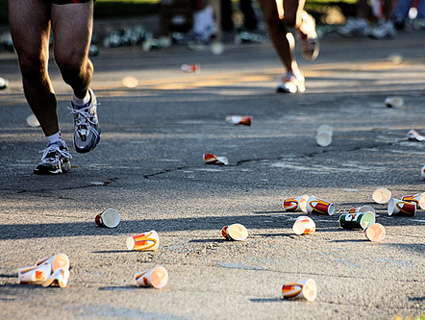 It’s hard to think of a mode of transport greener than running from one place to the next. There’s no gasoline, no bike tires, or electric charge necessary. Heck, you don’t even need shoes. But when I joined 21,250 other folks for a 26.2-mile slog at the 36th-annual Marine Corps Marathon in Washington, DC, last weekend, one of the things that struck me most was how much stuff the event generated. Hundreds of thousands of paper cups; countless packets of goos, gels, and sport beans; space blankets; and T-shirts all help add up to a rather large footprint for major running events.

And the Marine Corps race is smaller than the mother of all marathons, New York. That race will have 47,000 runners this Sunday. Organizers have actually floated the idea of adding a second day so that as many as 100,000 runners can traverse the five boroughs. That would mean a whole lot of cups on the ground at the end of the day.

But our collective impact isn’t just limited to how much trash we produce. It’s also about how we get to the race, how the products we use there are made, and what happens to them when we’ve all gotten our finisher medals and returned home. This led me to a pretty basic question: Can marathons be green at all?

The good news is that an increasing number of running events are making efforts to reduce their environmental impact. The Council for Responsible Sport was founded to encourage more sustainable approach to sporting events, and it has created a certification process for races that want to go green. The system looks at 41 different elements of a race to determine the level of sustainability and gives events a ranking that ranges from certified, if they meet at least 22 of those standards, to “evergreen” if the event meets 38 or more standards. Among the biggest races, Marine Corps was certified silver for 2009 and 2010, and Chicago was certified in 2010 and 2011. But neither Boston nor New York is currently among the races that have sought official “green” sanction.

The standards include things like the amount of waste produced, with a passing grade given if the event generates less than two pounds of refuse per participant. That can mean eliminating paper registration, cutting back on the coupons and fliers in the goodie bags, or handing out fewer plastic bags. Events are also given a point if participants and spectators are able to take public transit to the starting line. The standards also include social responsibility—like whether organizers have involved the community in the event, are donating a portion of proceeds to a local organization, and if they’ve made efforts to involve more women, people with disabilities, and minorities in the race.

Many races have even deployed “green teams” to separate the compostable banana peels from the wax-lined cups.

Planning a green event requires some more logistics than regular old runs, says Catherine Humblet, the managing director of the Council for Responsible Sport. Many races have even deployed “green teams” to separate the compostable banana peels from the wax-lined cups. But Keith Peters, founder of Eco-Logistics, a sustainable race consulting company, and the author of The Road Race Management Guide to Greener Running Events, says thinking only about the waste is a little bit misleading. While the trash is the most visible issue, a lot of it can be recycled or composted. Most of those little wax-lined cups can be composted, if they’re taken to the right facility. One race—the Peachtree 10K Road Race in Atlanta, which drew 60,000 runners in 2011—is also trying to start a cup recycling program in 2012.

Many of the other materials from races are actually recyclable, too. The shiny space blankets, the timing chips, and even the tyvek bibs can be recycled, if sorted and disposed of properly. Some races have designated places to turn them in. If you’re participating in a race that doesn’t, that may be something to ask organizers about for future races.

One of the biggest challenges is getting races to give up on the goodies, like T-shirts and medals. “I think of both of those are pretty sacred cows,” Peters says. T-shirts are seen as marketing tools for the race. And who doesn’t want a medal? But some races are also looking for organic or sustainable-fiber T-shirt options. Others, like the Cherry Blossom 10-miler in Washington, require participants to request and pay a little extra if they want a medal.

Both Peters and Humblet noted that a lot of the push for sustainability has so far come from organizers rather than runners. But if runners were to start asking for races to go greener, more organizers would probably take them up on that. “I don’t think it’s gotten yet to the point where the participant is making a choice based on whether or not an event is green,” Peters says. Of course, runners could start doing that—which would give new meaning to voting with your feet.