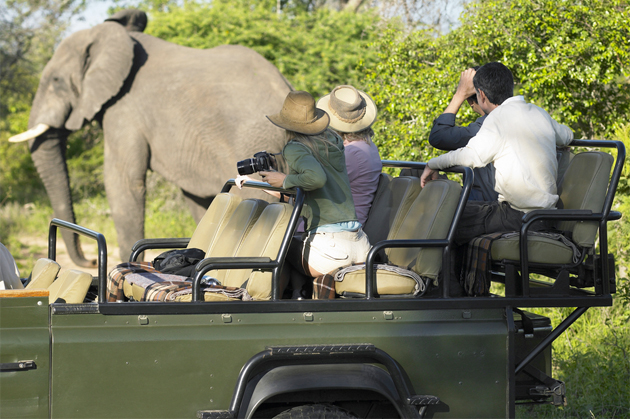 A pair of prominent environmental groups have quietly left the International Conservation Caucus Foundation, a polluter-funded nonprofit with ties to more than a quarter of US lawmakers. Conservation International and the World Wildlife Fund withdrew from the ICCF after a March 2013 Mother Jones story raised questions about the group’s lavish spending on “educational” trips for members of Congress with abysmal environmental voting records. [You can read the full story—”The Congressman, the Safari King, and the Woman Who Tried to Look Like a Cat”—here.]

Founded in 2006 by David Barron, a former lobbyist for West African dictators, the ICCF brought together polluting corporations, including ExxonMobil, Dow Chemical, and Pacific Gas & Electric, with four giant environmental groups—the Nature Conservancy, the Wildlife Conservation Society, Conservation International, and the World Wildlife Fund. Together, the polluters and green groups paid millions of dollars in dues over the years—much of which the ICCF spent wining and dining the 117 representatives and 23 senators in the International Conservation Caucus, an affiliated congressional group.

Legislation passed in the wake of the Jack Abramoff scandal was supposed to strictly limit the ability of special interests to fund congressional travel. But in the years since, the congressional ethics committees tasked with enforcing those rules have decided the post-Abramoff restrictions do not extend to nonprofit groups—even those, like the ICCF, that get much of their funding from lobbyists and organizations that lobby. This loophole has helped congressional travel to return to levels not seen since Abramoff’s globe-trotting prime: Nearly $6 million was spent on 1,885 privately funded congressional trips in 2013, the most since 2005, according to disclosures compiled by LegiStorm.

Former Alabama Rep. Jo Bonner, the top Republican on the House ethics committee from 2009 until 2012, was one man who could have reformed the system and blocked the ICCF and other lobbyist- and corporate-funded groups from paying for congressional travel. But Bonner benefited from the loophole: In August 2012, the ICCF spent $47,690 to take Bonner, two other GOP members of Congress, and assorted family members on an African trip that included a multiday stay at Ol Jogi, the 66,000-acre Kenyan ranch where the Oscar-winning film Out of Africa was filmed. The big-game reserve—then owned by a trust benefiting the Wildenstein family, a Franco-American aristocratic line accused of buying art looted by the Nazis, among other misdeeds—features a golf course, racetrack, dozens of man-made lakes, around 120 miles of road, more than 200 major buildings, and some 350 employees.

Four months after returning from Ol Jogi, Bonner declined to issue new regulations blocking nonprofit-funded junkets for members of Congress. In March 2013, he explained the trip to an Alabama newspaper chain by claiming he went to Ol Jogi to research Al Qaeda’s connection to poaching. Two months later, he announced he would resign his congressional seat to take a job in the University of Alabama system.

Another ICCF-arranged outing—a $30,700, 10-day tour of Botswana and South Africa that Rep. John Carter (R-Texas) and his wife took in August 2011—was the second most expensive on record for any single member of Congress.

When Mother Jones first wrote about ICCF last year, the Nature Conservancy, the Wildlife Conservation Society, Conservation International, and the World Wildlife Fund all defended their affiliation with the foundation. That was no surprise: The four environmental organizations helped launch the ICCF, which bragged that its “Advisory Council is comprised of four of the most influential international conservation NGOs.” On a page now missing from the foundation’s website, it said that the environmental nonprofits were “well-positioned with staff all over the world” and helped guide its operations by “contributing their scientific expertise, vast experience, and programmatic depth.”

The Advisory Council, however, went unmentioned in the ICCF’s “2014 Partners in Conservation” report. That’s because the body was scrapped in the summer of 2013, after Conservation International—the first environmental group Barron approached about forming the ICCF—also became the first to sever ties.

“CI’s grant to the ICCF concluded on June 30, 2012, at the end of our fiscal year, and therefore we are no longer a member,” spokesman Kevin Connor said when asked about the recent report.

The World Wildlife Fund left ICCF because, as the congressional “caucus became better established, the need for the Advisory Council diminished,” according to spokesman Ian Morrison. “WWF no longer has a formal connection with the caucus or foundation,” he said, before adding that the group would still be open to working with lawmakers on “programs tied to our key issues.”

But the World Wildlife Fund stayed on with ICCF at least long enough to enjoy its annual gala. The green group is listed as a partner in a program from the September 18, 2013, event. Although less star-studded than past galas, which featured luminaries ranging from Tony Blair to Harrison Ford, 2013’s festivities included a traditional West African dance performance after dinner. Also of note were the event’s two masters of ceremonies: former lawmakers Allen Boyd, a Florida Democrat turned “senior advisor” at a lobbying firm whose largest client last year was a tar sands trade group, and Mark Green, a Wisconsin Republican who left office in 2008 with a career score of 24 (out of 100) from the League of Conservation Voters.

Although it recently lost CI and WWF, it hasn’t been all bad news of late for the ICCF, which didn’t respond to questions about the recent defections. The other two members of the now-defunct Advisory Council—the Nature Conservancy and Wildlife Conservation Society—continue to work with ICCF, according to the foundation’s recent report. ICCF is also expanding its footprint abroad, forming affiliations with conservation caucuses in countries such as Colombia and Kenya. And Barron, who stepped down as the foundation’s president in 2009, has since returned to the fold as chairman of the new ICCF Group, an umbrella organization that claims to be piloting projects worldwide that could be done by a volunteer “conservation corps” of retirees, among other efforts.

The ICCF has also scored contributions from a handful of new corporate members. First-time donors include Altria, the tobacco giant that used to go by the name Phillip Morris, and AngloGold Ashanti, a mining firm with an environmental record that earned it a 2011 award for the world’s worst companies. Also on the list of new donors: Ol Jogi, which is now accepting reservations. Folks who can’t get a foundation to foot the bill can book a one-week stay on the game reserve for up to 14 people for $210,000.