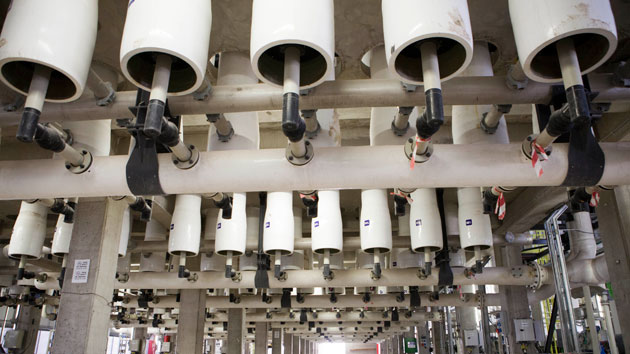 California has a lot of coastline. So why all the fuss about the drought? Desalination to the rescue, right?

Not quite. The largest desalination plant in the Western Hemisphere is currently under construction in Carlsbad in San Diego County at great expense. The price tag: $1 billion.

Right now, San Diego is almost totally dependent on imported water from Sierra snowmelt and the Colorado River. When the desalination plant comes online in 2016, it will produce 50 million gallons per day, enough to offset just 7 percent of the county’s water usage. That’s a huge bill for not very much additional water.

Desalination is not a new technology, but it’s still expensive. Despite the cost, its uptake is growing as dry places look to secure drought-proof sources of water. A new desalination plant built on reverse-osmosis microfiltering (the same method as the Carlsbad plant) will supply one-third of Beijing’s water by 2019. Desalination is already a major source of water for Australia, Chile, Israel, Saudi Arabia, and other drought-prone coastal regions. Smaller solar desalination plants are also gaining appeal in California.

When regional water agencies first considered a Bay Area desalination plant more than a decade ago, they briefly considered making it more than double the size of the plant currently under construction in San Diego County. Since then, the idea for the Bay Area plant has been scaled back to about 10 percent of the original size based on the maximum intake capacity of the local water district. A tentative location has also been chosen: Mallard Slough, near where the Sacramento River meets the Bay. The plant is now on indefinite hold pending local demand, though studies have proven it’s technically feasible.

“We’re nowhere near done doing all the environmental impact reporting,” said Abby Figueroa of East Bay Municipal Utility District, one of the partners of the would-be Bay Area desalination plant. “There are other options that are more likely for us to use in the short term. We’re counting on conservation as one of those supplies.”

Still, the drought may force a decision sooner rather than later. “This is year one [of the drought] for us. Other parts of California are in year three or four. The real pressure for us is going to come next year if it doesn’t rain.”

Which brings us to the pee-drinking.

This year’s drought has motivated California to invest $1 billion in new money on water recycling efforts statewide, a much more cost-efficient way of increasing potable water supplies. But reusing purified sewer water for brushing your teeth is not without its own set of issues. National Journal describes the biggest holdup:

The problem with recycled water is purely psychological. Despite the fact the water is safe and sterile, the “yuck factor” is hard to get over, even if a person understands that the water poses no harm. In one often-cited experiment, researchers poured clean apple juice into a clean bedpan, and asked participants if they’d be comfortable drinking the apple juice afterwards. Very few of the participants agreed, even though there was nothing wrong with it. It’s forever associated with being “dirty,” just like recycled wastewater.

While it’s not quite correct that every glass of water contains dinosaur pee, it is true that every source of fresh water on Earth (rainfall, lakes, rivers, and aquifers) is part of a planetary-scale water cycle that passes through every living thing at one point or another. In a very real way, each and every day we are already drinking one another’s urine.

Earlier this year, the city of Portland, Oregon (in one of the most Portland-y moments in recent memory) nearly drained a local 38-million-gallon reservoir after a teen was caught urinating in it. Slate‘s Laura Helmuth made a brilliant calculation that the poor lad would have had to pee for 40 days straight to raise the reservoir’s nitrate levels above EPA-allowable limits and make the water unsafe to drink.

The good news is that this hurdle isn’t permanent. Psychologists have found that when cities reintroduce purified municipal wastewater into natural aquifers, streams, or lakes for later withdrawal, public acceptance of the fact that yes-it-was-once-pee improves. Since 2008, Orange County has recharged a local aquifer with billions of gallons of recycled sewage via the largest potable water reuse facility in the world.

They’ve also had a large public awareness campaign. This clip from Last Call at the Oasis, a 2012 documentary on global water issues that mentions Orange County’s water recycling efforts, features Jack Black in a spoof ad for “Porcelain Springs: Water from the most peaceful place on Earth”:

Thanks to public support, Orange County will add another 30 million gallons of drinking-quality recycled water per day via a new $142 million expansion due to come online in 2015. Factoring in the costs of the current plant, Orange County will soon produce twice as much water for less than one-third of the average cost of San Diego’s new desalination plant. Reusing water that’s already been pumped to Orange County over mountain ranges also uses half the energy as importing new water.

The conclusion here is easy: If drinking purified pee weirds you out, don’t live in a desert.

California had a water problem long before climate change came around. Now, with growing demand from both cities and agriculture along with dwindling supplies, something’s gotta give. Conservation and common-sense measures like municipal water recycling can happen immediately. Grass on golf courses and lawns can be severely restricted, immediately. Agriculture can get smarter, immediately. Groundwater pumping can be regulated, immediately. All of these improvements can be had for very little change in quality of life. California’s water problems could diminish practically overnight.

New dams? Over the next 10–30 years you’d need to double the capacity of reservoirs that currently exist, just to replace the snowpack that will be lost due to climate change.

Barring a miracle, desalination is among the least desirable options. There are significant economic, environmental, energy, and political barriers. Desalination is the Alberta tar sands of water resources. When you look closely at the choices, it’s clear the future of Western water supplies is toilet water.

For all its issues, here’s another thing Tucson, Arizona, is doing right: Since 1984 the city has been offsetting drinking water imported across hundreds of miles of desert with recycled water for grass lawns and golf courses. Why there are still grass lawns in Tucson is anyone’s guess. (In fairness, Tucson gets about three times the average annual rainfall as Las Vegas, a far worse offender in the desert-lawn-growing category, even though it also recently started using recycled water.)

If the West wants to get serious about water, there are many things they can start doing right away, like drinking their own pee.

In the finale to the Thirsty West series, I’ll head north to Oregon to see how one small-scale farmer is fighting generations of precedent to try to build a new model for profitable and environmentally friendly agriculture. 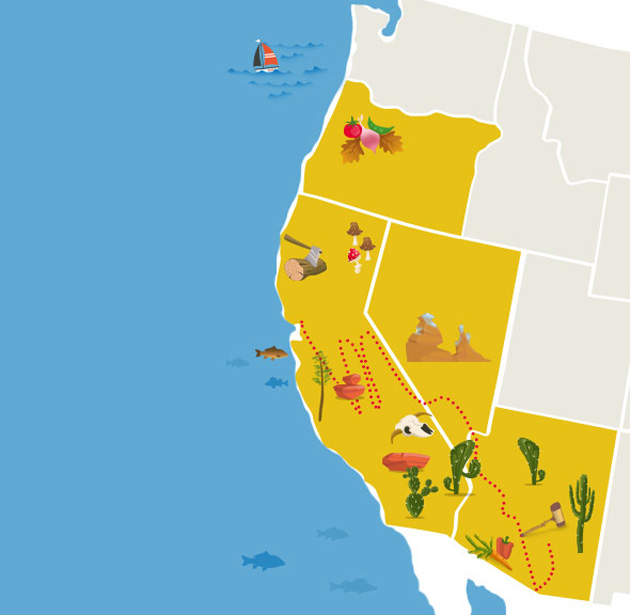