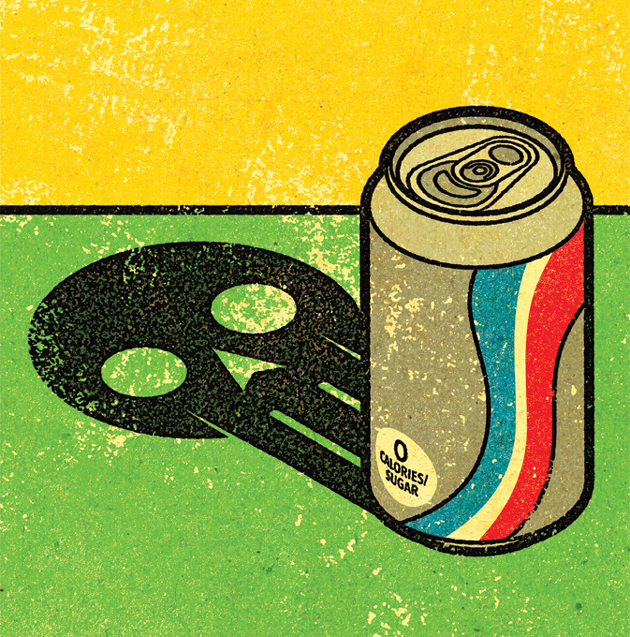 Junk-food giant PepsiCo is preparing to make the biggest change to its Diet Pepsi brand in three decades, Bloomberg News reports: it’s nixing the controversial low-calorie sweetener aspartame. In its place, Diet Pepsi will get its sweet jolt from a mix of sucralose and acesulfame potassium. The apparent reason for the shake-up: Diet Pepsi sales plunged 5.2 percent last year, Bloomberg noted. Rival Diet Coke fared even worse, enduring 6.6 percent drop in sales (though Coke is clinging fast to aspartame). What gives?

Even with the recent consumer turn away from these once-formidable products, the lure of sweet-but-virtuous soda is still going strong—and goes back decades. Recently, I came across one from a 1966 glossy magazine featuring a close-up shot of a supple-lipped woman filling a glass with Tab, Coca-Cola’s original diet soda. “One crazy calorie in every six ounces,” the copy purrs, with a Don Draper-ish flourish: “Like everything now, a little crazy, but wow.”

Today, diet drinks make up 27.5 percent of the $76.3 billion US soft-drink market, according to Beverage Digest. And artificial sweeteners don’t just work their magic on sodas. They also appear in stuff like Minute Maid Light Orange Juice, Quaker “25% less sugar” granola bars, and Thomas’ 100% Whole Wheat English Muffins. A 2012 study by Emory University researchers found that nearly a quarter of adults and 12.5 percent of children regularly consumed artificially sweetened beverages. Globally, the market for low-calorie foods and drinks will hit $10.4 billion by 2019, up from today’s $7.4 billion, predicts the firm Transparency Market Research. Prominent medical groups approve: The American Diabetes Association, for example, recommends diet soda as an alternative to the real stuff.

Yet a slew of studies have shown that faux sugars may actually contribute to the very diet-related maladies they’re marketed to protect us from—type 2 diabetes, hypertension, metabolic syndrome, strokes, and heart attacks. In a 2012 paper, University of Miami researchers analyzed data from the Northern Manhattan Study—which has tracked consumption habits and health metrics of thousands of people since 1990—and found those who drank at least one diet soda per day were 43 percent more likely to suffer strokes and heart attacks than people who drank none, even after controlling for such factors as weight, level of exercise, diabetes, high blood pressure, and intake of calories, cholesterol, and sodium. Another large population study, published in 2009, found that daily diet soda drinkers were 67 percent more likely to develop type 2 diabetes than people who shun them—again, even after adjusting for lifestyle and demographic factors. (“Natural” calorie-free sweeteners such as stevia and xylitol have barely been studied.)

Purdue University behavioral neuroscientist Susan Swithers suggests that fake sweeteners do their dirty work by confusing our digestive systems’ Pavlovian response to sugar. When you smell food, she explains, you begin to salivate and your stomach begins to grumble; that’s your body preparing for what it assumes from experience is a hearty meal to come. Similarly, she says, a sweet taste is a “pretty good indication that sugar is going to arrive in your body”—that is, a blast of easily digestible calories. So, quaff Pepsi, and your body starts releasing digestive hormones and increases its metabolic rate, “because you have to expend energy to get energy out of your food,” she explains.

Fake sweeteners appear to subtly disrupt the trillions of microbes that live in our digestive tracts.

But when you start ingesting sweet blasts that then don’t deliver the usual calorie blast, your body no longer knows what to expect. As a result, Swithers says, tests have found that “animals who have experience with artificial sweeteners don’t seem to be as good at regulating their blood sugar levels when they get real sugar”—hence the associations with diabetes and other metabolic troubles.

And this mechanism would appear to be independent of the kind of low-calorie sweetener used—if you ingest something that prepares your body for calories but doesn’t deliver, it doesn’t much much difference whether it’s aspartame or some substitute.

Two other new studies suggest another—and possibly related—mechanism: Fake sweeteners appear to subtly disrupt the trillions of microbes that live in our digestive tracts, known collectively as the gut microbiome. Scientists theorize that what we eat influences which of these bacteria thrive (or don’t) in our guts, and those microorganisms in turn influence how much energy (calories) our bodies draw out of food.

The first study, published in Nature by a team of Israeli medical researchers, found that mice fed water spiked with one of common fake sweeteners had a much higher tendency than the control group to develop glucose intolerance, a precursor to diabetes. When they treated the glucose-intolerant mice with antibiotics, the blood sugar condition vanished, suggesting that changes to the gut microbes had triggered the intolerance. (Unfortunately, the same trick wouldn’t work on humans with glucose intolerance—these mice had specially prepared digestive tracts.) Furthermore, when they implanted feces from the sweetener-fed mice into other mice it prompted glucose intolerance. And the effect was was similar for all three sweeteners they used: saccharin, aspartame, and sucralose.

In the other study, published in plos One, researchers found that rats fed with low doses of aspartame showed elevated glucose levels and an impaired ability to tolerate insulin compared to the control group. Fecal analysis showed that the aspartame also triggered changes in their gut bacteria and increased the presence of microbes associated with glucose, “potentially explaining its negative affects on insulin tolerance,” they wrote.

Swithers says that it will take more research to untangle whether these results are consistent with her Pavlovian hypothesis—that is, whether the gut changes are triggered by fouling up our bodies’ learned responses to sweetness. What’s becoming clear, she says, is that our health does not necessarily improve when we swap artificial sweeteners for sugar. “In general, our diets are way too sweet,” she says.

That wasn’t always true—in 1966, the year that great Tab ad ran, we consumed 15 percent less added sugars per capita than we do today. Somehow, we survived that sugar-deprived era without widely available artificially sweetened foods. Instead of going “diet”—no matter what chemical the industry uses to sweeten the deal—the better idea may be just cutting back a little on soda and other sweetened foods. Like everything now, a little crazy, but wow.