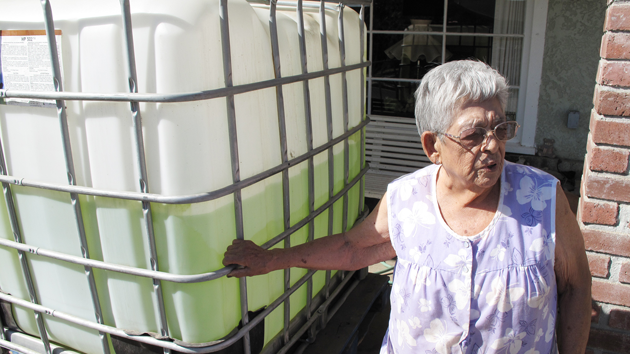 Vickie Yorba, 94, stands next to a water tank outside her home in East Porterville, California.Scott Smith/AP

Most of us are feeling the effects of the California drought from a distance, if at all: Our produce is a little more expensive, our news feeds are filled with images of cracked earth. But thousands of people in California’s Central Valley are feeling the drought much more acutely, because water has literally ceased running from their taps. The drought in these communities resembles a never-ending natural disaster, says Andrew Lockman, manager of the county’s Office of Emergency Services. Most disasters are “sudden onset, they run their course over hours or days, and then you clean up the mess. This thing has been growing for 18 months and it’s not slowing down.”

Here’s what you need to know about California’s most parched places:

What do you mean by “no running water”?
No water is coming through the pipes, so when residents turn on the tap or the shower, or try to flush the toilet or run the washing machine, water doesn’t come out.

Who doesn’t have running water?
While a handful of communities across the state are dealing with municipal water contamination and shortages, the area that’s hardest hit—and routinely referred to as the “ground zero of the drought”—is Tulare County, a rural, agriculture-heavy region in the Central Valley that’s roughly the size of Connecticut. As of this week, 5,433 people in the county don’t have running water, according to Lockman. Most of those individuals live in East Porterville, a small farming community in the Sierra Foothills. East Porterville is one of the poorest communities in California: over a third of the population lives below the federal poverty line, and 56 percent of adults didn’t make it through high school. About three quarters of residents are Latino, and about a third say they don’t speak English “very well.” 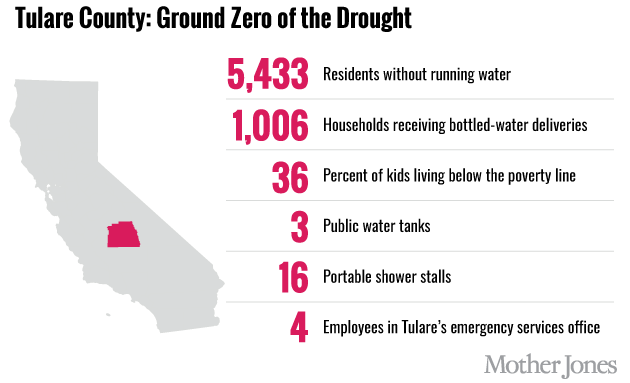 Why don’t they have running water?
Many Tulare homes aren’t connected to a public water system—either because they are too rural or, in the case of East Porterville, because when the community was incorporated in the late 1970s, there wasn’t enough surface water available to serve the community. Until recently, this wasn’t a problem: the homes have private wells, and residents had a seemingly unlimited supply of groundwater. Most domestic wells in East Porterville are relatively shallow—between 25 and 50 feet deep—because water wasn’t far below ground level.

With California in its fourth year of drought, there’s been little groundwater resupply and a lot more demand—particularly as farmers resort to pumping for water—leading the water table to drop dramatically and wells to go dry. Those with money can dig deeper wells, but this generally costs between $10,000 and $30,000—a cost that’s prohibitive for many Tulare residents.

If they don’t have running water, how do they function?
Of the roughly 1,200 Tulare homes reporting dry wells, about 1,000 of them have signed up for a free bottled water delivery service coordinated by the county. Homes receive deliveries every two weeks; each resident is allotted half a gallon of drinking water per day. The county has also set up three large tanks of nonpotable water, where residents can fill up storage containers for things like showering, flushing toilets, or doing dishes. Portable showers, toilets, and sinks have been set up in front of a church in East Porterville.

Wait, people are showering outside a church?
Yup. Some residents have been living without water for over a year, says Susana De Anda, the director of the Community Water Center, a non-profit serving the area. “It’s a huge hygiene issue where we don’t have running water. It kind of reminds me of Katrina,” she says. “The relief came but it came kind of late.”

The state’s offering temporary help, right?
To provide interim relief, the county is also working to install water storage tanks outside of homes with dry wells. The 2,500-gallon tanks, usually set up in yards, are filled with potable water and connected to the home, giving a rough semblance of running water. Only about 170 such tanks have been installed so far, in part because the process for installing the tanks is so laborious. Applicants need to prove ownership of the house, open their home to a site assessment, and more—with each step of the process involving a days or weeks long queue. Some 1,300 homes still don’t have tanks installed.

Hundreds of rental properties don’t have running water, and because domestic water storage tanks aren’t set up at rental units, migrant workers aren’t likely to reap the benefits of this interim solution. Another challenge is misinformation: The free water programs are open to residents regardless of citizenship, but myths still prevents some from taking advantage of the services. When the portable showers were first installed in front of the church, says Lockman, many people suspected they were an immigration enforcement trap. Some parents haven’t been sending their children to school, having heard that child welfare services would take away kids from families that don’t have running water.

Who’s working on this?
This year, the state has set aside $19 million to be spent on emergency drinking water. In Tulare, the Office of Emergency Services, which coordinates a network of contractors covering the needs of half a million people, currently has a staff of four people. (Three more positions were approved this week.)

In the long term, community leaders are working to build an infrastructure so that homes can be linked to a municipal water supply. But that work is “slow and expensive,” says Melissa Withnell, a county spokesperson.

Are farmers taking the water?
Yes, but it’s hard to blame them. Tulare County is among the biggest agricultural producers in the country, growing everything from pistachios and almonds to grapes and livestock. “If you were to just look at the landscape, it’s very green,” says De Anda. “You wouldn’t think we were in a drought.” The industry brings in nearly 8 billion dollars per year, employing many of those individuals who currently lack running water. Permits to drill new wells have skyrocketed—just this year, nearly 700 irrigation wells have been permitted, compared to about 200 domestic wells. (Wells permits are issued on a first come, first served basis.) “It’s like one big punch bowl that’s not getting refilled but everybody’s been slowly drinking out of it and now we have a thirsty football team at the same punch bowl as everybody else,” says Lockman. “Do we have sustainability problems? Oh yeah, absolutely.”