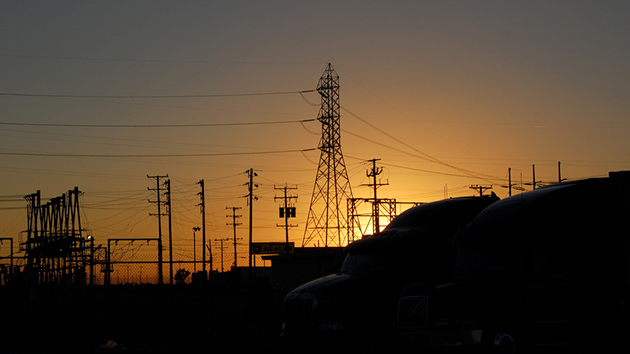 Back in January, California Gov. Jerry Brown (D) made a promise. His state, he said, would pursue a new package of climate goals that are the most ambitious in the nation (and among the most ambitious in the world). California was already a leader in efforts to slash greenhouse gas emissions and promote clean energy. Brown pledged to go further. By 2030, he declared, California would double the energy efficiency of state buildings; get half its electricity from renewables; and halve consumption of gasoline by cars and trucks.

At the time, all those nice-sounding goals were just words in a speech. But they could very soon become the law of the land. The state legislature is currently considering several bills (SB 350 is the most important) that would codify Brown’s climate agenda. The legislation is widely expected to pass before the end of the legislative session next Friday, but not without a fight from the state’s powerful oil lobby.

Before we get into the bills themselves, let’s talk about California. Believe it or not, the state where America fell in love with cars and highways is now leading the nation, and the world, when it comes to climate action. And that matters, because California, the world’s seventh-largest economy, is a world-class emitter of greenhouse gases. It ranks second for state emissions, behind Texas, and if it were its own nation, it would rank 20th globally, right between Italy and Spain. Still, it’s remarkably clean for its size: On a per-capita basis, it ranks 45th among US states and 38th when compared with countries around the world. (Below, the bars represent total emissions and the dots represent per-capita emissions.) 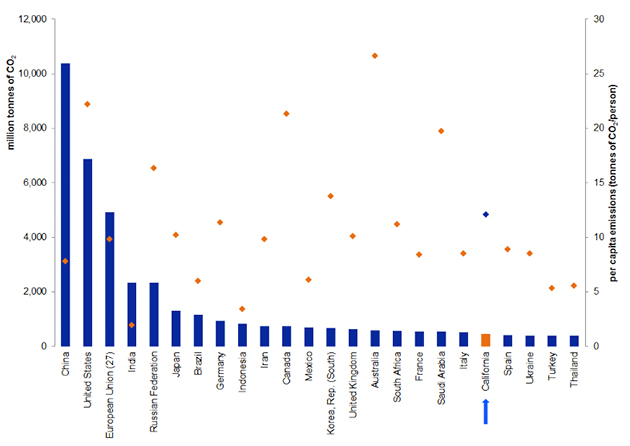 California is also special because of how much of its emissions come from road transportation (cars, trucks, buses, etc.), which is why a major reduction in gasoline use would be so significant. Nationally, just 27 percent of greenhouse gas emissions are from transportation; in California, it’s 37 percent. Another way to crunch those numbers: One-tenth of the nation’s road transport emissions come from California. Unsurprisingly, California is also the biggest consumer of gasoline, accounting for one-tenth of the national gas market. As a result, it also has an infamously aggressive oil lobby—more on that in a minute.

“If California can do this, it could really be the beginning of the snowball,” Tim O’Connor said.

California first stepped onto the national climate stage back in 2006 during the Arnold Schwarzenegger administration, with the passage of AB32, known as the Global Warming Solutions Act. That law sets a target of reducing the state’s economy-wide carbon footprint to 1990 levels by 2020. Since the bill was enacted, gasoline consumption in the state is down 9 percent—double the nationwide decline. Total carbon emissions are also down, while GDP and population are both on the rise. Roll those things together and you get the most impressive number: The carbon intensity of the state’s economy (that is, emissions per unit of GDP) is down 28 percent. The upshot is that California has become a proving ground for the notion that strong economic growth and climate action can go hand in hand: 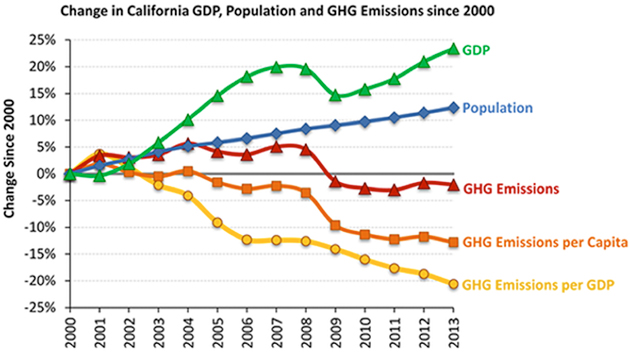 That’s where the current bills come in. SB 350 would bring the state’s gasoline consumption down to about where Florida’s is now, while setting new targets for clean energy and energy efficiency projects. There’s also SB32, which would build on Schwarzenegger’s targets and require the state to reduce greenhouse gas emissions 80 percent below 1990 levels by 2050 (to meet that target, emissions have to start falling about five times faster than they currently are). That would be the most aggressive state target in the country; nationally, the furthest President Barack Obama has gone is to aim for a 26-28 percent reduction by 2025 (and that’s not enshrined in law, either). Both bills passed the state Senate in June by a wide margin; they’re due for a vote in the Assembly within the coming week. If they pass, they’ll head to Brown’s desk for a signature.

Neither bill includes specific prescriptions for how to meet the targets. Those are left to the state’s Air Resources Board (CARB), which would be required to turn in an enforcement plan by 2017. The gas consumption target would likely require some combination of new fuel efficiency standards for cars, incentives for alternative fuels and biofuels, cooperation with local planning agencies to improve public transit and make communities less car-reliant, and a push to get people to buy more electric vehicles. (California is already home to half of the roughly 174,000 electric vehicles on the road in the United States.)

“If California can do this, it could really be the beginning of the snowball,” said Tim O’Connor, director of California policy for the Environmental Defense Fund. “This is how California can really shake up the national conversation on climate.”

The oil lobby has long been the most powerful special interest group in Sacramento.

Combined, these efforts are expected to create up to half a million jobs, according to a recent University of California-Berkeley study, and draw billions in clean tech investments (for which California is already the undisputed national champ). The bills’ supporters in the California capitol also say they will save millions of dollars in traffic-related public health costs and result in reduced energy bills.

The bills’ other supporters include Obama; both the state’s US senators and a majority of its congressional delegation; and a coalition of California businesses, large and small. But they also have some powerful enemies who are pushing back hard.

Because of the state’s share of the gasoline market, and its robust oil and gas production industry, the oil lobby has long been the most powerful special interest in Sacramento. The biggest group, the Western States Petroleum Association, spent $8.9 million on lobbying last year. Now, Californians are getting blitzed by ads like the one below, from the so-called California Drivers Alliance (backed by WSPA, and representing “fuel users & providers”). The ad claims SB 350 will lead to gas rationing and is all about “limiting how far we can drive” and “penalizing drivers for using too much gas.” The bill’s sponsor, Sen. Kevin de Leon (D-Los Angeles), called the ad “absurd” and “fear-mongering.”

“There’s a significant amount of inertia protecting the industry,” O’Connor said. “The lobby is putting its aim right at the center, at swing moderates” in the Assembly.

We’ll have to wait and see how this pans out. But California has a strong history of leadership on climate policies—including carbon trading programs (it created the nation’s first economy-wide cap-and-trade market in 2012) and clean vehicle standards—so the odds are pretty good.

“The governor has put his reputation on the line,” O’Connor said. “It’s hard to imagine 350 won’t pass.”