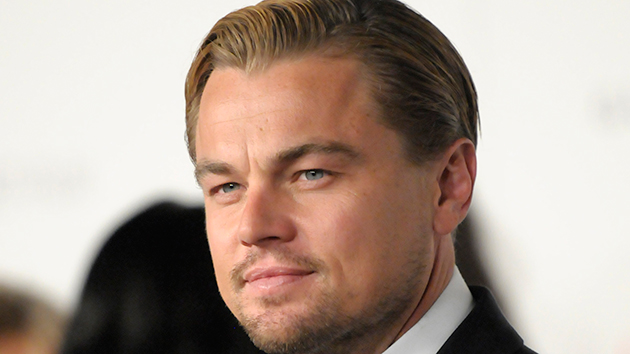 Leo is pulling his money out of fossil fuels…if he had any there to begin with. Dan Steinberg/AP

That’s probably why the environmental activist group 350.org used it in a headline for a press release today announcing a report on the growing movement to divest from dirty energy companies: “FOSSIL FUEL DIVESTMENT PLEDGES SURPASS $2.6 TRILLION.”

But the report itself tells a somewhat different story.

Released this morning at a New York press conference, the report tallied commitments—made by a global assortment of universities, local governments, pension funds, charitable foundations, religious institutions, and more—to sell off investments in the fossil fuel industry. The tactic has become popular with climate activists as a way to call attention to the industry’s transgressions against the climate, and maybe even to destabilize its bottom line.

On hand to trumpet the findings: Leonardo DiCaprio, along with the head of the UN climate agency (via video) and a packed room of top brass from environmental groups, clean energy companies, and major foundations. DiCaprio himself joined the list, pledging to divest his personal finances and his foundation’s holdings from fossil fuels.

That big number—$2.6 trillion—has nothing to do with the amount of money that is actually being pulled out of fossil fuel stocks.

“To date,” the report reads, “436 institutions and 2,040 individuals across 43 countries and representing $2.6 trillion in assets have committed to divest from fossil fuel companies.”

“That’s real money,” said Ellen Dorsey, director of the Wallace Global Fund, in announcing the number, to much applause.

And it is! Pulling that kind of cash out of the fossil fuel juggernaut could land a true financial blow, a clear victory in the global war to stop climate change.

But there’s a catch. That big number—$2.6 trillion—has nothing to do with the amount of money that is actually being pulled out of fossil fuel stocks. In fact, the investment consultancy behind today’s report has no idea how much money the institutions surveyed have invested in fossil fuels, and thus how much they have pledged to divest.

Instead, that number refers to the total size of all the assets held by those institutions—hence the word “representing” in the quote above from the report. And that’s a huge difference.

Here’s a perfect example: The report lists the University of California system as a prominent new entry into the divestment movement. Earlier this month, the UC’s chief investment officer announced that the system’s endowment would sell off its holdings in coal and tar sands oil. Those holdings were worth about $200 million. An undisclosed amount is still invested in oil and gas. But the report uses the full amount of the university’s total endowment: $98 billion. That’s 490 times higher than the amount of money actually being divested.

So what’s the exact portion of the $2.6 trillion that is being divested from fossil fuels? No one knows. Indeed, Dorsey couldn’t even confirm that all the institutions listed in the report necessarily had any fossil fuel holdings in their portfolios before they decided to divest. As for DiCaprio, when asked by reporters to clarify the exact amount of his personal stake in fossil fuels, he smiled and waved but kept mum.

“Every investment portfolio is different, and some are exceedingly complex,” Dorsey said.

Brad Goz, the director of business development for a New York consultancy that helps institutions figure out how to divest, agreed that it can be difficult to figure out how and where a fund is invested.

“Hedge funds like to keep it opaque,” he said. “But that becomes less challenging when CEOs demand [the information].”

The best Dorsey could offer was an estimate based on the portion of the value of the S&P 500 that comes from fossil fuel companies: 3 to 7 percent. In other words, that $2.6 trillion statistic is probably much closer to $182 billion—a pretty small piece of the roughly $6 trillion value of the global market for coal, oil, and gas. Dorsey also clarified that the promised divestments are scheduled to take place over the next five years, not overnight.

When asked by reporters to clarify the exact amount of his personal stake in fossil fuels, DiCaprio smiled and waved but kept mum.

To be fair, the real divestment figure isn’t nothing, and there’s some evidence that it’s growing: When this same analysis was released last year, the reported figure was just $50 billion (compared with $2.6 trillion this year). Still, it’s not clear whether any of this is enough to actually draw the notice of corporations like Exxon and Shell, and the report offered no evidence that the divestment campaign has had a specific, tangible impact on share prices.

“The purpose of divestment is to make the point that the [fossil fuel] industry is losing legitimacy,” she said. “It’s about their reputation, which is less quantifiable but equally damaging.”

If she meant that the appearance of a big divestment movement can help promote more divestment, she’s probably right. Expect to see more announcements like this over the next few weeks in advance of the upcoming UN climate talks in Paris. Just make sure to read the fine print.