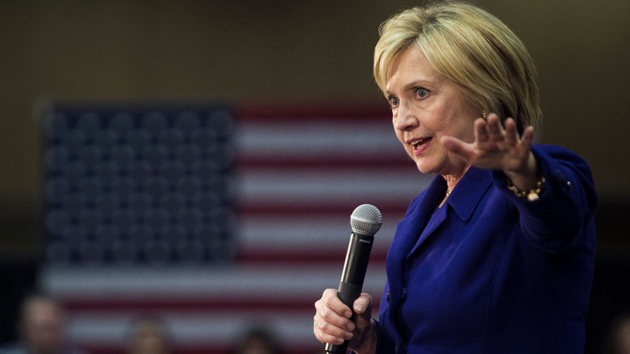 In July, the climate grassroots group 350 Action asked Hillary Clinton at a campaign stop in New Hampshire for her position on banning fossil fuel development on public lands. Clinton gave what she deemed a “responsible answer” that she wouldn’t accept a ban until we get “the alternatives in place.” I asked her campaign chair John Podesta the same question in October, and he only suggested a willingness to use “policy levers” to affect fossil fuel production.

Now, Clinton is ready to take a more definitive stand on limiting fossil fuel extraction on federal lands—which has emerged as a top priority for climate organizers after their victory against the Keystone XL pipeline. Griffin Sinclair-Wingate, a 350 Action organizer, approached Clinton after the New Hampshire debate on Thursday night and asked her, “Would you ban extraction on public lands?”

“Yeah, that’s a done deal,” Clinton said, as though her position were obvious. Afterward, she told another 350 activist that she agrees with “where the president is moving. No future extraction.” Adam Greenberg asked her in a third video on Friday while campaigning in New Hampshire, “Would you end all oil, coal, and gas leases on federal lands?” Clinton said, “I want to impose a moratorium…because there are legal issues you have to go through, you know all of that, but I would support a moratorium.”

Clinton doesn’t appear to be endorsing anything too radical, or so far beyond what President Barack Obama has already started.

Clinton doesn’t appear to be endorsing anything too radical, or so far beyond what President Barack Obama has already started. In order for the United States to deliver on its promises in the Paris climate agreement, the next administration will have to take additional steps to limit the demand and supply of fossil fuels, even if the agreement itself was vague on the details. Scientists and activists insist that any meaningful curb on climate change must keep coal, oil, and gas reserves in the ground. One encouraging sign was the president’s recent announcement to impose a three-year moratorium on leasing public lands for coal development, allowing the Department of Interior time to reform how it leases lands for extraction.

Clinton’s comments only show that she supports that moratorium, and that she might support expanding it to oil and gas leases. Yet her position still represents a tectonic shift in the Democratic Party on policies that were once a long-shot wish of climate activists.

However, there are limits to how far Clinton is willing to go. Pressed on her position regarding hydraulic fracturing, a controversial drilling process to extract gas and oil more commonly known as fracking, Clinton wouldn’t call for an outright ban, unlike her opponent Bernie Sanders. She pointed out, accurately, that the president also doesn’t have much control over drilling on private lands, where much of the development occurs. “[W]hat the government does have the ability to do is to impose very strict regulations on the chemicals that are used,” Clinton said. “I don’t want to mislead you and say, ‘Oh, I can ban it,’ that is just not accurate.”

Sanders may have something to do with Clinton’s change of tune. He proposed a bill to ban fossil fuel development on public lands in December, and there’s evidence his strong climate proposals gave him an advantage in Iowa—enough to get him to a virtual tie.

If Clinton is serious about imposing strict limits—and I’m not fully convinced these off-hand comments show she is—that would mean she and Sanders agree on many of the climate movement’s top priorities.