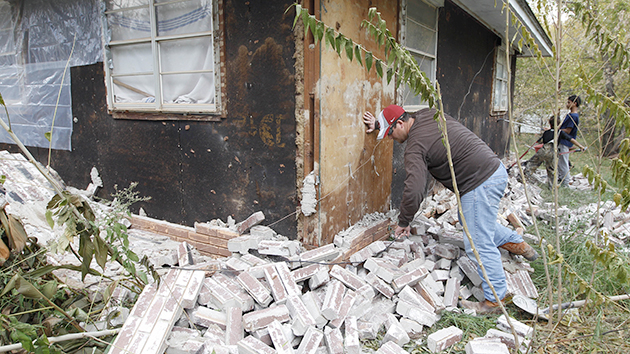 A man in Sparks, Oklahoma, picks through rubble from his home following an earthquake in 2011.Sue Ogrocki/AP

Over the last few years, Oklahoma has experienced an insane uptick in earthquakes. As we reported in 2013, the count exploded from just a couple per year back in the mid-2000s to over a thousand in 2010, growing alongside a boom in the state’s natural gas drilling industry.

There is now a heap of peer-reviewed research finding that Oklahoma’s earthquake “swarm” is directly linked to fracking—not the gas drilling itself, but a follow-up step where brackish wastewater is re-injected into disposal wells deep underground. It’s a troubling trend in an industry that thrives under notoriously lax regulations, especially when the risk to property and public safety is so obvious.

If those numbers weren’t dramatic enough, here’s another: This year, Oklahoma has experienced an average of two quakes per day of magnitude 3.0—enough to be felt and inflict damage to structures—or greater. That’s according to a deep, comprehensive report on the subject out in this week’s New Yorker.

But even freakier than the earthquakes themselves, according to the story, is the pervasive denial of science coming from state agencies like the Oklahoma Geological Survey, whose job it is to oversee the oil and gas industry:

The official position of the O.G.S. is that the Prague [Oklahoma] earthquakes were likely a natural event and that there is insufficient evidence to say that most earthquakes in Oklahoma are the result of disposal wells. That position, however, has no published research to support it, and there are at least twenty-three peer-reviewed, published papers that conclude otherwise.

The story goes on to detail super-cozy relationships between top regulators and drilling company executives; the state’s ongoing and systemic habit of dismissing or ignoring the rapidly accumulating pile of evidence about the quakes; and a failure by regulators and the state legislature to take any meaningful steps to address the crisis. It’s really quite damning.

As a reporter covering the fracking industry, I’ve found that a lot of the problems associated with the technique aren’t necessarily inherent to it, and could be resolved with more pressure on companies to behave responsibly, or laws requiring them to. Better zoning regulations could keep wells out of neighborhoods. Stricter well construction standards could cut down on the leakage of methane, a potent greenhouse gas, and help ensure that gas or chemicals don’t contaminate groundwater. In other words, while industry may resist them, there are ready solutions at hand to many of the most cited drawbacks. And the same could be true in the case of earthquakes: while many geologists have now found that drilling wells into deep “basement” rock can set off temblors, there still isn’t a law in Oklahoma that simply requires locating disposal wells elsewhere.

Their state’s lack of basic engagement on the fracking-and-earthquakes issue is, understandably, a source of great frustration to Oklahomans, including those who are otherwise totally supportive the drilling industry. They’re worried not only about above-ground damage, but about how quakes might effect the state’s vast network of oil pipelines and underground aquifers. It’s hard to imagine the nightmare that would result if a serious earthquake ruptured these pipelines and caused a major spill. That sentiment was nicely captured in the New Yorker by a quote from the town manager of Medford, a hamlet outside the oil center of Cushing:

“We want to be a good partner for the oil companies—it’s exciting for us that they’re here. But if they can move the disposal well even just three miles, what a difference that would make.”