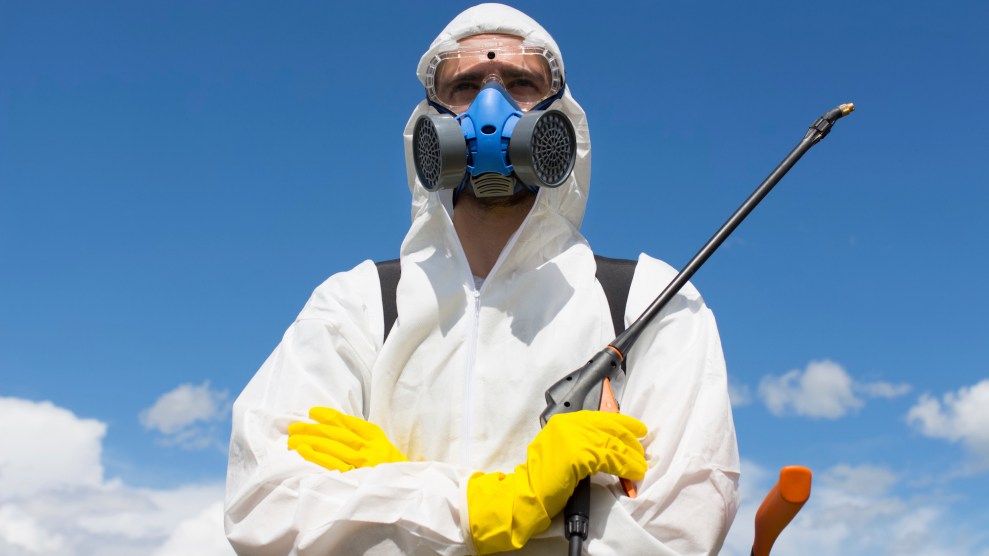 Back in 1996, seed and chemical giant Monsanto introduced crops engineered to withstand a weed killer called glyphosate (brand name: Roundup). Soon after, glyphosate emerged as by far the globe’s most prolific pesticide, its use spiking ninefold in the United States and nearly fifteenfold globally. All the while, it enjoyed a reputation as a relatively benign agrichemical compared with older, harsher herbicides like 2,4-D and dicamba.

The EPA didn’t study glyphosate as it’s actually used—in combination with other chemicals.

Last year, the International Agency for Research on Cancer, which evaluates potential carcinogens for the World Health Organization, detonated a stink bomb in global agriculture and public-health circles by declaring glyphosate “probably carcinogenic to humans,” after completing a lengthy assessment of the existing science.

But in a report released last week, staff scientists for the US Environmental Protection Agency—which is in the middle of reevaluating glyphosate and a host of other commonly used chemicals—pushed back, declaring that their own review of the scientific literature found the weed killer “not likely” to be carcinogenic to humans. The EPA will host a panel of outside scientists in October to evaluate the report.

The EPA’s in-house assessment criticized the IARC report, claiming that some of the more damning studies that led to the “probably carcinogenic” conclusion were “low quality” and therefore irrelevant.

The EPA isn’t the first major public authority to contradict the IARC’s finding. The European Food Safety Agency concluded last year that glyphosate is “unlikely” to cause cancer, though it did propose a “new safety measure that will tighten the control of glyphosate residues in food.” In May, another arm of the WHO teamed up with the United Nation’s Food and Agriculture Organization (FAO) to assemble a panel to evaluate glyphosate. The joint WHO/FAO team, too, found it an unlikely carcinogen.

One subtle difference between the IARC’s review and that of the EPA, the EFSA, and the FAO involves the question of whether to evaluate glyphosate as an isolated chemical or the way it’s actually used in farm fields. To make a usable herbicide, agrichemical companies mix an active ingredient like glyphosate with other chemicals, called adjuvants and surfactants, that help ensure the pesticide penetrates beneath a weed’s surface, or coats its leaves, to administer the poison. As I’ve shown before, these chemical additives are lightly (at best) regulated by the EPA, and can have harmful effects.

The IARC indicates that it took data from studies that used both “pure” glyphosate and real-world formulations of glyphosate with other chemicals. The group found “strong” evidence that in both isolated and mixed forms, the famed herbicide can cause cancer.

While the EPA and the EFSA disagree with that conclusion about pure glyphosate, they have so far not taken a position on the stuff as it’s actually used. In its assessment, the EPA states that it evaluated only the “human carcinogenic potential for the active ingredient,” not that of “glyphosate-based pesticide formulations.” As for the EFSA, its conclusion, too, was based on pure glyphosate, and it acknowledged that one common ingredient in glyhpsate-based herbicides, POE-tallowamine, is more toxic than glyphosate itself. The carcinogenic potential of real-world glyphosate formulations “should be further considered and addressed,” EFSA added.

The European Union banned  POE-tallowamine in July. In a blog post a few weeks later, Monsanto claimed that it had “already been preparing for a gradual transition away from tallowamine to other types of surfactants for commercial reasons,” adding that “tallowamine-based products do not pose an imminent risk for human health when used according to instructions.” (For more on this, see this excellent piece from the Intercept‘s Sharon Lerner.) The company did not say what it planned to replace POE-tallowamine with.

Here in the United States, more than 3.5 billion pounds of pure glyphosate have been applied since 1974, about two-thirds of that in the last decade alone. It’s great to know that on its own, glyphosate doesn’t likely trigger cancer. It would be better still to know more about its effects as it’s actually used, mixed with other, lightly studied chemicals.