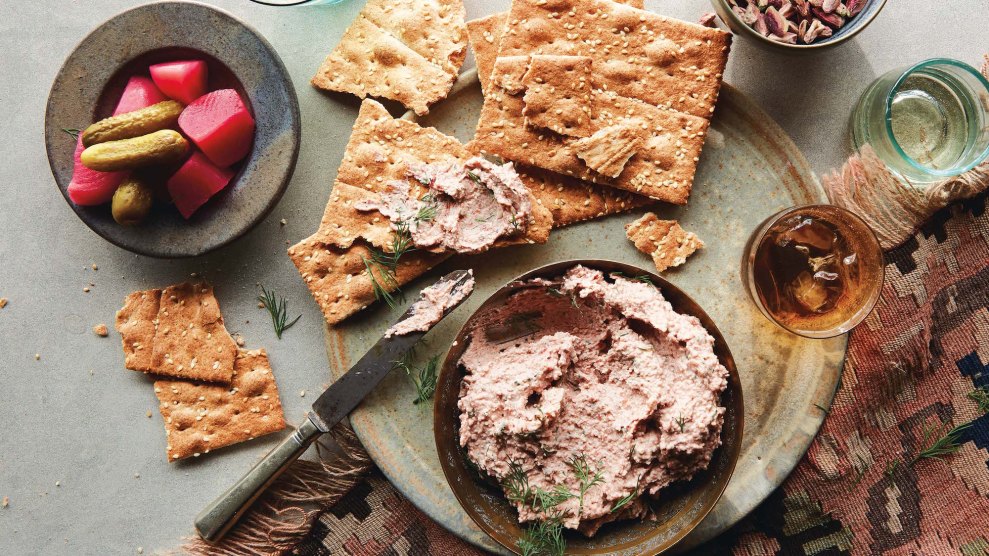 In a kitchen rut? Try lobahashu, a walnut and kidney bean pâté from the Lori region of Armenia, from my favorite cookbook of the year, Naomi Duguid's Taste of Persia. Reproduced from Taste of Persia by Naomi Duguid (Artisan Books). Copyright © 2016. Photo by Gentl & Hyers

This year has been a rough one, characterized by political catastrophe and the deaths of great musicians: Prince, David Bowie, Leonard Cohen, Sharon Jones, and more. One way I’ve coped is by cooking while listening to favorite songs from these fallen geniuses—and a bumper crop of great cookbooks has been a great comfort. I began 2016 in a kitchen rut. For years, I’ve been focused on getting great seasonal ingredients and doing as little to them as possible—and most of the cookbooks I’ve leaned on in recent years follow that solid but ultimately limiting strategy. My favorite cookbooks of 2016 are ones that shook me up, pushed me into new flavor palates and kitchen strategies. You can listen to me review my five favorites in this week’s episode of Bite podcast and read about them below.

• Taste of Persia: A Cook’s Travels Through Armenia, Azerbaijan, Georgia, Iran, and Kurdistan, by Naomi Duguid 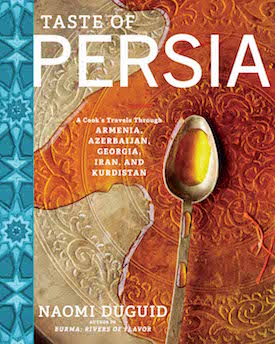 The intrepid Naomi Duguid has written a fantastic guide to a grand cuisine that is little known to US eaters, mainly because of the tortured history of the the US-Iran relationship. This one is personal for me, because way back in my college years, I lived for a while with Iranian housemates. The only way they could get a taste of home was to cook for themselves. The main thing I remember was their distinctive way with rice, which they intentionally overcooked to the point that it developed a golden-brown crust along the edges. They’d use this crisp outer layer like a flatbread, dipping it into spicy lamb or beef stews. Duguid’s book takes me straight back to that time—she delivers a foolproof recipe for that crusty rice, called chelo. And she also opens whole new vistas on a grand but neglected cuisine that sparkles with mint, parsley, pomegranate, rose petals, and spices like cinnamon and cardamom. On Thanksgiving, I cooked a dish—recipe here—that combined many of those elements into a gorgeous and delectable soup.

Great gift for: The committed home cook who has hit a rut; anyone interested in learning more about Iran and its foodways
Killer dish: Pomegranate ash (soup) with lamb meatballs; crusty Persian rice
Dish I’m dying to try: Purlsane soup

• All Under Heaven: Recipes From the 36 Cuisines of China, by Carolyn Phillips 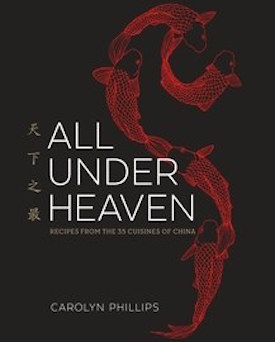 Here is an ambitious take on a country whose cuisine is both ubiquitous and brutalized here in the United States. Carolyn Phillips is a veteran expert on Chinese cooking and creator of the blog Madame Huang’s Kitchen, which takes the last name of her husband, a Chinese national. This doorstop of a book divides the country into five regions. Each section obliterates the idea of a monolithic cuisine that draws its flavor from MSG and whose idea of a vegetable is a canned water chestnut. Many of the recipes are dead simple: “fried green onion noodles” could be whipped up on a Tuesday night without any special ingredients. Others, like Hangzou-style noodle soup, require a bit more prep—and bamboo pith fungus. Generally, you’ll need access to a decent Chinese grocery, but mostly you’ll just have to seek out quality produce, meat, and fish. Despite its reputation here, Chinese cooking does not hide food under a cloak of heavy and cloying condiments. I’ve never been to China, but for me, All Under Heaven brings home the vibrant, vegetable-forward, umami-laced restaurant cooking I’ve found in places with large Chinese enclaves, like Manhattan’s Chinatown. For a deep dive into that storied area, check out this episode of Bite podcast.

• A New Way to Dinner: A Playbook of Recipes and Strategies for the Week Ahead, by Amanda Hesser and Merrill Stubbs 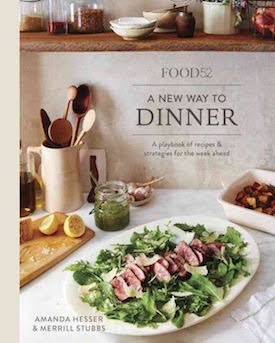 This is the magnum opus of the kitchen wizards behind the venerable website Food 52. It’s really two cookbooks: one chock-full of the kind of straight-ahead, irresistible stuff you find on Food 52, like fish filets coated with herbed mayo, gently roasted, and then broiled to develop a burnished top. Yum, right? But it’s also a kind of meta-cookbook offering a strategy that will be appreciated by many food-obsessed people (like me) who are tired of eating dinner at 10 p.m., and then facing a sink-full of dishes as midnight creeps in on a work night. In their scheme, you do all the menu planning, shopping, and most of the prepping over the weekend. You devote about three hours to the complicated, time-consuming stuff then, and whip out marvelous dinners during the week without much fuss or cleanup. No one who’s not already obsessed with regularly cooking top-notch home-cooked meals will ever do this—it’s hard to compete with takeout and meal kits—but I love it. No more rushing to the grocery on Wednesday night to throw together an ultimately stress-inducing, messy meal.

• Home Cooked: Essential Recipes for a New Way to Cook, by Anya Fernald 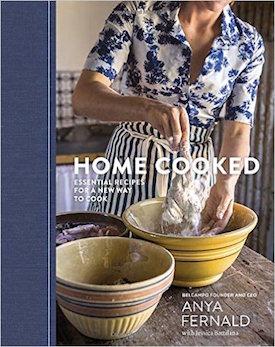 Anya Fernald is a longtime expert on the flavors and culinary techniques of Italy, and runs a California pasture-based meat empire called Bel Campo. I opened the book half-expecting to be put off by Northern California sanctimony, but in the end I got sucked in by the sometimes-complicated and potently flavored dishes on offer. Like the Food 52 authors, Fernald urges readers to take a long view of cooking. Many of her dishes rely on what she calls “long cuts”—”time-consuming base ingredients made when time and ingredients are abundant, then preserved to be used when they are needed.” She offers an impossibly rich, glorious, and relatively quick ragu—quick, that is, for those who have bone broth, preserved tomatoes, and sofrito already on hand, all of which Frenald tells you how to do. That sofrito is the base of many dishes—it’s just onions, carrots, and celery slow cooked in olive oil and blended into a burnt-orange paste with a flavor as deep as the roots of an old-growth tree. Fernald suggests making a big batch and then freezing it in ice cube trays, ready when you need it. A mere dollop makes her eggs poached in a quick sauce of grated fresh tomatoes into an easy weeknight triumph.

• Around the Fire: Recipes for Inspired Grilling and Seasonal Feasting From Ox Restaurant, by Greg Denton and Gabrielle Quiñónez Denton 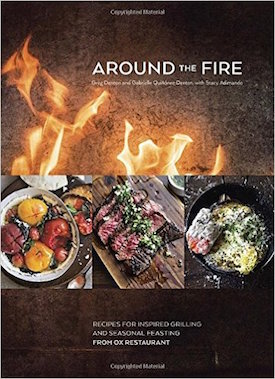 I’m normally allergic to cookbooks based on a single method of cooking. I’m also skeptical of chef-authored books, because they tend to presume limitless time and labor. So when I picked up this pretty tome, by the chef-owners of the famed open-fire restaurant Ox in Portland, I didn’t expect to be drawn in. I thought it might start with a recipe for constructing a vast restaurant-grade fire pit topped with a cast-iron grate—and then harangue me to spend hours hunting down fancy cuts of firewood. But it turns out to have plenty of great ideas even for a backyard Weber-and-charcoal fellow like me. I never saw the point of grilled fish—sautéing works so well—but their mackerel made a believer out of me. Along with flame-kissed mackerel steaks, you grill poblano chilies till they’re charred and then use them to make a smoky version of that great Spanish sauce, Romesco. Their meat preparations—think onion-marinated skirt steak with the delectable Argentine green sauce chimichurri—are also top-notch. And since Ox is inspired by South American cooking, they also deliver great recipes for empanadas, as well as delectable and dead-easy ceviches that never touch a grill.

Great gift for: The grill obsessed, and the kitchen-bound cook who needs reminding of the glories of outdoor cooking
Killer dish: Onion-marinated skirt steak with the chimichurri
Dish I’m dying to try: Grilled artichokes with espelette mayo

Honorable mention: The veteran food writer Ronni Lundy has written a gorgeous ode to the cooking of Appalachia, called Victuals. Pronounced “vittles,” as the book’s cover makes clear, Victuals is equal parts cookbook and travelogue. It demonstrates that this stunningly beautiful, long-beleaguered region boasts a proud culinary heritage and an even richer food future. A traditional mountain dish called “killed lettuce”—lettuce leaves tossed with chopped green onions and vinegar and then wilted with hot bacon grease—exemplifies the hearty, resourceful cooking of the region.