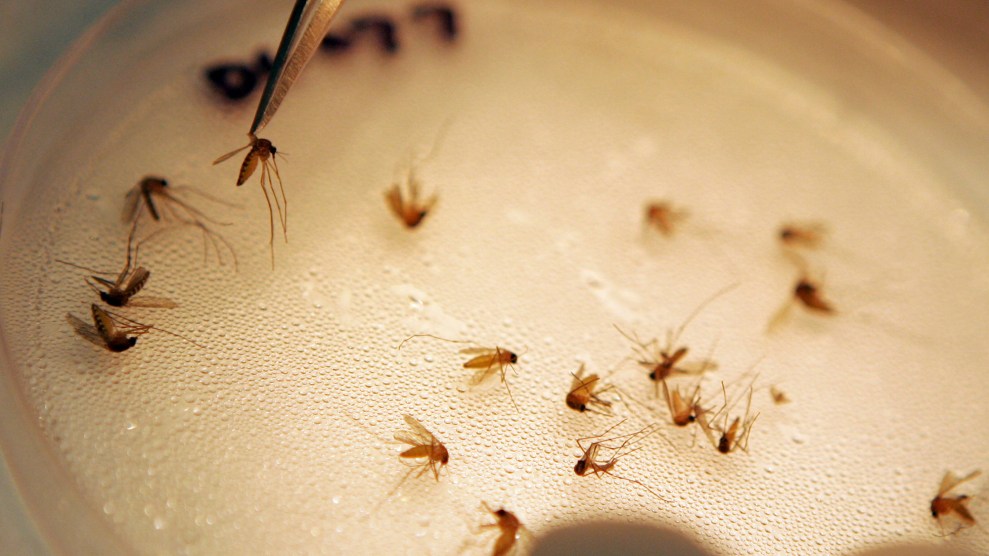 Over six days, Hurricane Harvey dumped an estimated 27 trillion gallons of rain over Texas and Louisiana. (Houston got almost 52 inches.) The storm displaced an estimated 35,000 people and knocked out power to 224,000 homes. At least 100,000 homes were flooded, many to the point where they are no longer liveable. Private wells are tainted by toxins, and there are still concerns about the safety of the region’s tapwater. Rebuilding could take years, and not everyone can afford it.

And now, to top it all off, the good citizens of Houston may have to contend with swarms of disease-carrying bloodsuckers.

Chris Barker, an epidemiologist and mosquito expert at the University of California-Davis, points out that severe flooding in urban areas creates an initial “flushing effect” that reduces mosquito populations for a short time. “Mosquitoes don’t like moving water because [the larvae] breathe through the surface of the water, and they need to stay stationary, essentially,” he explains. But all the stagnant water left behind by an epic storm like Harvey enables the mosquitoes to surge back stronger than ever. “You can imagine that creates a lot of habitat,” Barker says.

“In the Houston area at the moment, the number one virus of concern would be West Nile.”

Houston already ranked seventh on Orkin’s 2017 list of the Top 50 Mosquito Cities—based on the number of residential and commercial customers who hired the pest-control company to address their mosquito problems. And more mosquitoes mean more potential for disease. The Aedes mosquitoes—which can breed in containers of water as small as a bottle cap and have the capacity to spread viruses including Zika, dengue, and chikungunya—are “quite prevalent” in the Houston area, Barker says. But they can only spread these viruses after biting the rare people—presumably travelers—who are already infected. (Storm-battered Puerto Rico will have more to fear from Zika and dengue in the wake of Hurricane Irma.) “In the Houston area at the moment,” Barker says, “the No. 1 virus of concern would be West Nile.”

That’s because Culex mosquitoes pick up West Nile from birds—a permanent natural reservoir for the virus—before spreading it to people through their saliva. And unlike Aedes mosquitoes, Culex can travel far, “maybe 5 to 10 kilometers, so they have the ability to colonize new areas relatively quickly,” Barker says.

Even at the peak of past West Nile outbreaks, only a small proportion of the Culex mosquitoes—perhaps 1 in 100—were found to be infectious, says Lark Coffey, who studies mosquito-borne viruses at UC-Davis. But when these mosquitoes hatch out in unusually large numbers, West Nile cases surge.

Last year, according to the Centers for Disease Control and Prevention, Texas reported 353 West Nile infections—17 percent of all US cases—resulting in 13 deaths. This year’s numbers are lower: Just 48 infections and 2 deaths were reported in Texas as of August 29. But Harvey could change that.

The good news is that fall is approaching, so mosquito season should wane before too long. But here’s the bad: Given the extensive flood damage, hundreds of backyard swimming pools and other prime breeding spots in close proximity to humans will be filled with filthy water and are likely go unmaintained. “That could bring some pretty large mosquito populations compared to normal,” Barker says.

This explosion of breeding sites could present a major headache for Harris County’s mosquito-control personnel. Temperatures in Houston are expected to remain in the high 80s for at least the next week or two. Culex mosquitoes lay their eggs in small rafts on the surface of open water and the eggs hatch within a few days. “In the warmest temperatures,” Barker says, “it would take about a week for those to become adults and begin biting people.”