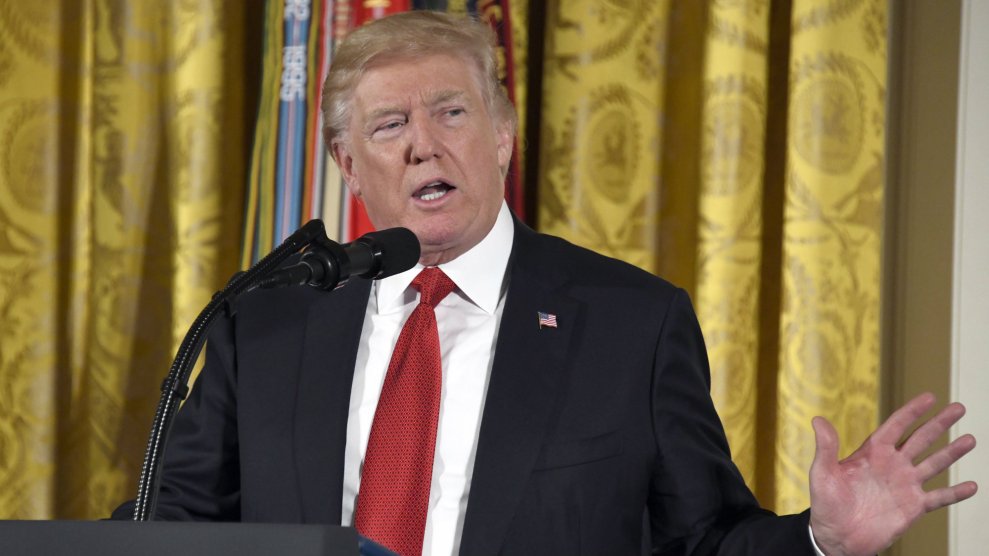 It became clear early in Donald Trump’s presidency that many of his top officials shared a common trait: They were climate deniers. Though “climate denial starts at the top,” the New York Times’ Coral Davenport wrote in March, it was trickling down into a variety of high-influence position: Vice President Mike Pence, who once called global warming a “myth” disproved by the fact that his home state once had a cold winter; then-senior advisor Steve Bannon, whose news site Breitbart remains one of the top destinations for climate misinformation; Environmental Protection Agency Administrator Scott Pruitt, who believes carbon dioxide is not a “primary contributor” to global warming; and Department of Energy Secretary Rick Perry, who believes the same myth, saying in June, “No, most likely the primary control knob is the ocean waters and this environment that we live in.”

But that was just the beginning. Nine months into Trump’s presidency, he continues to nominate climate deniers to key spots in his administration. The latest denier of note is Trump’s nominee to lead the National Aeronautics and Space Administration, Oklahoma Congressman Jim Bridenstine. Though commonly thought of as solely a space exploration agency, NASA dedicates nearly a tenth of its budget to studying the earth’s climate from space. Scientists around the world use NASA’s space station and its 16 earth science satellites for climate research. NASA scientists monitor and predict changes in Arctic sea ice, as well as changes in the earth’s temperature and rainfall patterns due to carbon emissions. NASA is one of the few remaining government Twitter accounts that still tweets accurately about climate science.

Earth's carbon cycle is off balance ⚖. NASA is working to answer big questions about the relentless rise of CO2: https://t.co/w5SOy0FViU pic.twitter.com/6igMoLYt73

And yet, Trump nominee Bridenstine—whose confirmation goes before the Senate Commerce, Science, and Transportation Committee on Wednesday—frequently spouts easily debunked climate misinformation. A former Navy pilot with no scientific background, Bridenstine has implied that a single snowy day disproves long-term global warming trends. He has used the tired red herring, “The climate has always changed.” He’s explicitly denied that carbon emissions have anything to do warming trends, saying perhaps the sun is instead to blame.

If confirmed, Bridenstine could move NASA away from one its core missions: studying changes to the planet. He once demanded an apology from President Barack Obama for “wasting money” on climate research, and this year he told E&E News that he’s “open to moving earth science out of NASA and into another federal agency.” But Bridenstine is far from the only science denier whom Trump has nominated or appointed in recent months. Here’s a look at the latest misinformers Trump has chosen to top spots in his administration, and how those nominees threaten to take anti-science far beyond basic environmental policy.

The White House has its own body for shaping climate policy, the Council on Environmental Quality, and earlier this month Trump nominated Kathleen Hartnett White to run it. If confirmed by the Senate, she would be one of the more outspoken climate deniers in his administration. The former chair of the Texas Commission on Environmental Quality (TCEQ), she has called climate science a “kind of paganism” for “secular elites.” She has said excess carbon emissions are “beneficial,” an “essential nutrient for plant growth.” And she believes the United Nations’ efforts to reduce carbon emissions are a veiled attempt to create a “one-world state ruled by planetary managers.” During her six years as TCEQ chair, she was an outspoken advocate against federal regulations to limit ozone, a harmful air pollutant. She “rebuffed proposals to strengthen smog rules and repeatedly allowed large polluters to increase emission limits,” according to the Texas Observer. In her new position, Hartnett White would not only coordinate environmental policy efforts across the federal agencies, but also play a key role in implementing the National Environmental Policy Act, which requires environmental reviews of big federal projects. Considering her focus on the moral case for developing fossil fuels—she once said the proliferation of coal helped end slavery—it seems likely she’ll streamline reviews of projects that could harm the climate.

Climate denial is also ascendant at the Department of Agriculture, which is worrisome given the vulnerability of American farms to a changing climate. Under Agriculture Secretary Sonny Perdue, who was confirmed in late April, USDA employees have been instructed to avoid the term “climate change” altogether, in favor of more vague terms like “weather extremes,” according to The Guardian. Trump’s nominee for the USDA’s top scientific post, conservative radio host and non-scientist Sam Clovis, has said climate science is a “nonsensical” attempt by progressives to achieve “perfect weather” worldwide. And Bill Northey, who was recently confirmed as the USDA’s undersecretary for farm production and conservation (a new position dedicated to dealing with “domestic agricultural issues”), has said he has “no idea” what’s causing climate change. So as farmers in America cope with increased drought and other weather extremes, it’s unlikely global warming will be one of the “domestic issues” Northey considers.

Other recent Trump picks engage in denial by omission. John Rood, a former Lockheed Martin senior vice president, was appointed in June as undersecretary of defense for policy—the Defense Department’s number-three official, who shapes the Pentagon’s policy agenda. Rood appears to have made no documented statements on climate change, despite widespread agreement throughout the Pentagon that global warming is a national security threat. And the public knows little about the climate positions of AccuWeather CEO Barry Myers, nominated to head one of America’s premier climate change research agencies, the National Oceanic and Atmospheric Administration. “One of the big unknowns about Myers is his position on climate change,” The Washington Post reported this month. “He has made no known public statements on the politically charged issue.”

The sheer number of deniers now occupying top positions across the government makes clear that climate denial, whether explicit or implicit, is a job requirement in the Trump administration—and one that’s valued more highly than having the knowledge and experience required for the position. This fact, in the case of Trump’s NASA pick, has alarmed Democrats and Republicans alike. “Rep. Bridenstine’s denial of fundamental scientific facts and long record of bigoted and hateful statements run counter to [NASA’s] legacy,” Washington Senator Patty Murray wrote in a letter last week to the Senate Commerce committee. Florida Senator Marco Rubio also expressed concern about the nomination. “It’s the one federal mission which has largely been free of politics and it’s at a critical juncture in its history,” Rubio told Politico, adding that he’d prefer someone who has “respect of the people who work there from a leadership and even a scientific perspective.”

The same could be said about any of the Trump picks named in this article. But Rubio, whose hometown of Miami is slowly sinking into the sea, has been more sanguine about Trump’s other climate-denying nominees, including Pruitt. As it turns out, Rubio’s concern about Bridenstine has nothing to do with the congressman’s refusal to accept climate science; his concern is only that the Kennedy Space Center, located in Cape Canaveral, not be adversely affected by a controversial administrator. “I just think it could be devastating for the space program,” he told Politico. “Obviously, being from Florida, I’m very sensitive to anything that slows up NASA and its mission.” And here we have the problem in black and white—or red and blue. The rise of climate denial on the right long predates Trump; with picks like Bridenstine, he is merely doing the bidding of a Republican Party that asserts, to quote one senator, “I do not believe that human activity is causing these dramatic changes to our climate the way these scientists are portraying it.” That senator was Marco Rubio.