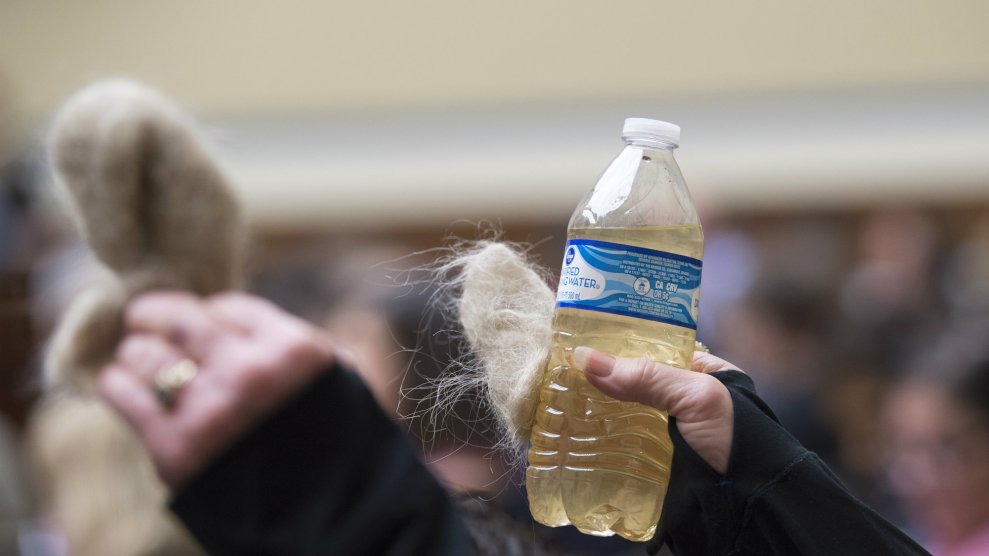 A Flint resident holds up a bottle of the city's water along with hair pulled from her drain.Molly Riley/AP

This story was originally published by The Atlantic and appears here as part of the Climate Desk collaboration.

When the city of Flint, Michigan, temporarily switched its water source to the Flint River in 2014, it didn’t treat the water properly. The untreated river water corroded pipes, allowing lead to leach into the water. Tests found lead levels in the region’s water to be higher than that of hazardous waste, but the city failed to warn residents of the danger for months. State officials are now facing criminal charges for their role.

The devastating health consequences of this lapse are now becoming clear. A recent paper finds that the city’s lead crisis may have sparked a drop in birth rates and a precipitous rise in miscarriages. For the working paper, Daniel Grossman from West Virginia University and David Slusky from the University of Kansas compared fertility rates in Flint to those in other Michigan cities before and after Flint changed its water source in 2014.

They found that fertility, or the birth rate, declined by 12 percent among Flint women, and the fetal death rate increased by 58 percent. The authors describe the difference as “horrifyingly large,” but say it’s also an undercount, because it doesn’t include miscarriages that happened before the 20th week of gestation, which is when most hospitals start counting. It did not appear that women were worried about the lead and opting not to have kids—sadly, it seemed more likely that they weren’t aware of the lead threat.

Past studies have similarly found that lead in the drinking water in Washington, D.C., in the early 2000s led to a 12 percent decrease in the fertility rate and a 32 to 63 percent increase in the fetal death rate.

“Overall, we found that approximately 275 fewer children were born in Flint than we would have expected had the city not changed its water source,” Grossman said in a statement.

“Overall, we found that approximately 275 fewer children were born in Flint than we would have expected had the city not changed its water source.”

The babies born in Flint were also slightly, but not much, less healthy than they were elsewhere. But the authors caution that those children might be yet to face the full brunt of lead’s negative health impacts. Lead exposure can cause “decreased educational attainment, increased behavioral problems and criminal behavior, and worse labor-market outcomes,” the authors write. The toxin can decrease IQ, potentially for life. The number of Flint children with lead-poisoned blood roughly doubled after the city changed water sources.

Flint is yet another example of how the health of low-income communities of color can be damaged by the environment, and by high-level policy decisions. Flint is majority-black, according to the Washington Post, and it’s the nation’s poorest city. But this case is far from the only time low-income people and people of color have been disproportionately affected by lead. Studies have shown that black neighborhoods are, on average, more likely to be impacted by lead toxicity than predominantly white areas.

The problem often starts with housing segregation, which creates pockets of housing that go without inspections or renovations. As my colleague Vann Newkirk reported, in New Orleans, “housing discrimination in the city had forced generations of black residents into segregated wards and neighborhoods, often located in the areas with the highest risk for both lead poisoning and flooding.” The city’s housing authority, HANO, he writes, “simply didn’t respond to thousands of complaints or keep buildings up to code. In 1994, 15 years after HANO was labeled a ‘troubled’ development, HUD inspectors visited 150 units in the neighborhood and found that all 150 units failed to meet standards—with problems including peeling lead paint, asbestos exposure, and massive roach infestations—and that none of the units had been updated at all in 10 years.”

In Baltimore, more than 65,000 children were found to have high blood-lead levels between 1993 and 2013, according to FiveThirtyEight, or three times the national rate. Freddie Gray, who died in police custody after growing up in one of Baltimore’s poorest neighborhoods, received a settlement for lead poisoning. According to The Baltimore Sun, “experts suggest Gray’s mental impairment by lead poisoning might have played a role in his struggles in school and his involvement in the drug trade.”

Though Baltimore has made strides in lead abatement, the city has also recognized the connection between its lead-tainted homes and its historically high fetal- and infant-mortality rates.

The health consequences of lead have been well-known for decades. But even after they became clear, industry leaders and policy makers would sometimes blame the people affected for their own ailments.

As Laura Bliss reported for CityLab, a 1957 meeting of the Health and Safety for the Lead Industries Association featured director Manfred Bowditch admitting, “The major source of trouble is the flaking of lead paint in the ancient slum dwellings of our older cities.” “It was necessary,” Bliss wrote, “‘to educate the parents’ about the risk of lead paint, Bowditch complained to a colleague in 1956. ‘But most of the cases are in Negro and Puerto Rican families, and how does one tackle that job?’”