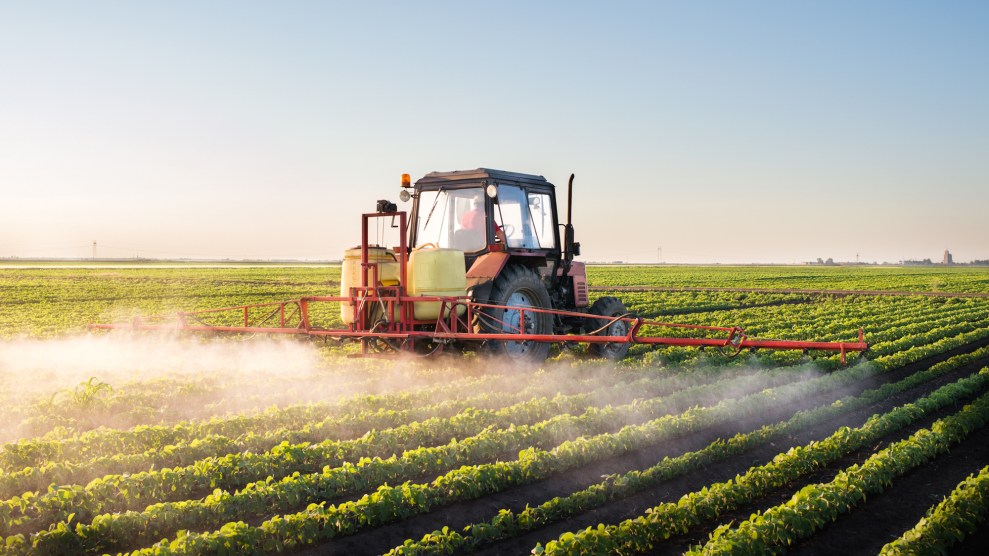 The drama (background here) surrounding Monsanto’s latest blockbuster genetically modified soybean product grinds on. The enormous seed/pesticide company announced recently that it’s offering farmers a cash reward to spray its proprietary version of an herbicide called dicamba, so long as they spray it on Monsanto’s soybeans that are engineered to tolerate it. Dicamba, of course, is the very herbicide that caused huge stirs in the farm belt in both 2016 and 2017 because of its apparent difficulty staying in place.

More than 3.6 million acres of non-dicamba-tolerant soybeans were damaged by wayward dicamba applications during the 2017 growing season, the EPA reports.

Reuters reports that Monsanto’s XtendiMax dicamba-based herbicide “costs about $11 per acre to buy,” That means the rebate, $6 per acre, effectively amounts to a 54 percent discount on the chemical.

Why is Monsanto offering such a sweet deal on its dicamba mix? It’s probably not what the company had in mind when it broke ground on a $975 million expansion of its dicamba plant in Luling, La., earlier this year.

The answer likely lies in the more than 3.6 million acres of non-dicamba-tolerant soybeans that the US Environmental Protection Agency reports were damaged by wayward dicamba applications during the 2017 growing season. In addition, the EPA notes, off-target dicamba hit a variety of fruit and vegetable crops, as well as residential gardens, trees, and shrubs.

A group of state-university weed scientists say that the core of the problem lies in the dicamba compound itself. It easily “volatilizes”—that is, transforms into a gas that can be carried in the wind away from its targeted field. And the volatility problem gets worse after temperatures rise over summer—the very season farmers are supposed to apply it to dicamba-tolerant soybeans as they grow.

Monsanto, for its part, insists that its patented “low-volatility” formulation effectively keeps the compound in place, and any problems in 2017 stemmed from user error—farmers who either failed to follow the product’s complex label or who secretly used a cheaper generic alternative.

Meanwhile, North Dakota has joined another soybean-heavy state, Arkansas, in placing restrictions on dicamba use for next year. The idea is to keep farmers from applying it in warm weather—the precise season when it could make controlling weeds easier, but also when dicamba is most volatile. The new North Dakota rules ban farmers from applying dicamba after June 30, and also any time temperatures top 85 degrees Fahrenheit. Minnesota is  considering similar rules, and Missouri is close to banning its use after April 15.

Such restrictions make dicamba trickier to deal with, and thus less valuable for farmers. If Arkansas goes through with its post-April 15 ban, it will largely render dicamba-tolerant soybeans useless for the state’s farmers—they won’t be allowed to spray it on top of emerged crops. And that’s bad for Monsanto, which, before the spate of state-imposed restrictions, told investors to expect acreage of dicamba-resistant soybeans to double next year.

Monsanto may be hoping to address that factor by offering the $6/acre rebate. In addition, the company is offering users of its proprietary dicamba mix other perks, including free spray nozzles, a “Spray App for applicators to help them avoid problematic weather conditions to achieve on-target applications,” and even free flags emblazoned with the the brand name of the engineered soybeans, Roundup Ready Xtend.

For a look at why farmers are keen to plant crops resistant to dicamba in the first place, go here.