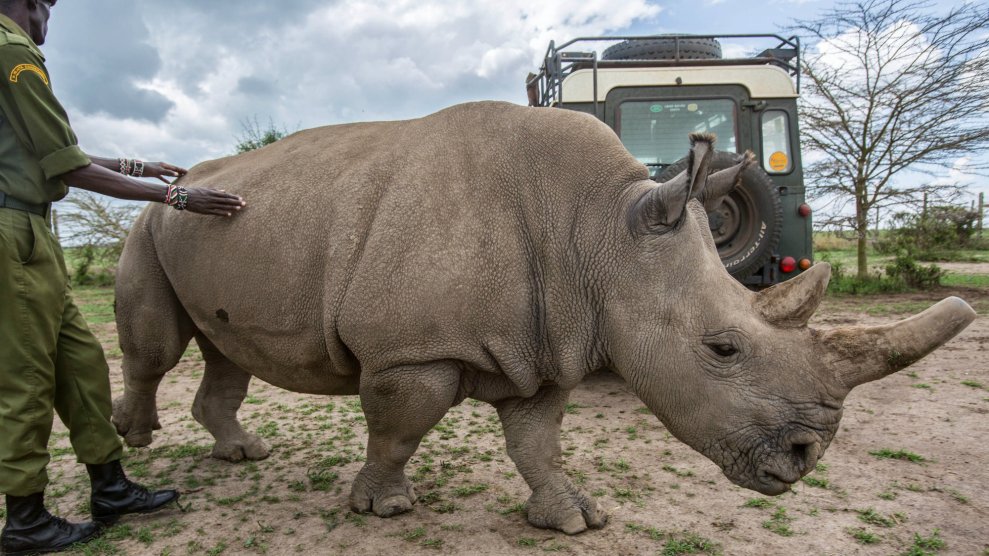 For over 20 years, Thomas Hildebrandt has harboured a dream: to save the northern white rhinoceros, the world’s rarest large mammal.

On Monday the scientist received the devastating news that Sudan, the last male of the species, had been put down in his northern Kenyan home, aged 45. Hildebrandt’s office is full of pictures of him, on which he points out the species’ unique pearl-like skin, furry ears, huge feet for tackling swamps, and horns capable of lifting two tons.

“We were extremely sad,” Hildebrandt said. “He was old and very sick, and we knew the day would come, but I’d known him for 18 years and he was the gentlest of creatures who had become an important ambassador for species protection.”

“He was old and very sick, and we knew the day would come, but I’d known him for 18 years and he was the gentlest of creatures who had become an important ambassador for species protection.”

Hildebrandt has short videos of Sudan in his final weeks of life that the rhino’s carers in Ol Pejeta conservancy sent him so that he could follow his decline—he gradually stopped eating and walking, whereupon the decision was made to put him down.

Sudan did not live to see another northern white rhino being born, despite efforts to mate him in Kenya with southern white rhinos to at least produce a hybrid. But Hildebrandt said he is very hopeful that the last two remaining members of his species, Fatu and Najin, his 28-year-old daughter and 18-year-old granddaughter, will.

Prof Hildebrandt is head of reproduction management at the Leibniz Institute for Zoo and Wildlife Research in the eastern suburbs of Berlin. He holds the keys to rescuing the species, discovered in Belgian Congo by the British geologist Richard Lydekker in 1908, when there were hundreds of thousands of the animals, before it was hunted to virtual extinction for its valuable horn.

Unlocking the door of a nondescript concrete block at the institute this week, Hildebrandt showed off a cryogenic tank in which 300ml of northern white rhino semen is stored in liquid nitrogen at -196C. Hildebrandt has been collecting the samples with colleagues for about 15 years. He couldn’t expose the samples, “because it’s just too delicate,” he said, “it’s truly priceless. Part of the world’s cultural heritage.”

The tank sits next to many others in the high-security complex—a potential treasure trove of samples including semen of the cancer-resistant naked mole rat, disease materials, tumours and microbes—that could provide the answer to some of the world’s diseases.

“We humans kill a species in its very fragile habitat, and then ask: ‘why is it important to rescue it?’ This animal is at the end of a complex biological system. “

Following the death of Sudan, the rhinos are uppermost in his mind. In what he calls a race against time, he plans to deploy IVF techniques and fly to Kenya to collect eggs from the ageing females, Fatu and Najin, in May or June via a method called ovum pick-up. The incubated eggs will be flown from Ol Pejeta via Nairobi to Zurich and then onto Cremona in Italy where Cesare Galli, who specialises in assisted reproduction of large animals, will mature and fertilise them and develop embryos suitable for transfer. They will then be implanted in southern white rhino surrogates—neither Fatu nor Najin are able to carry calves themselves—in the hope they will carry them to full term.

“It’s very foreseeable in the near future that we’ll have offspring,” Hildebrandt said.

Even if Hildebrandt and his team manage to produce a lot of offspring from the two females using IVF with the frozen semen they have, they will be unable to achieve the necessary biological variety to create a long-term sustainable population, he said.

Which is where stem cell research is crucial. Within the next three to five years the institute should be able to use skin cell samples taken in 2014 from Sudan and other northern white rhinos, add genes to them in order to turn them into stem-cells, and encourage them to become eggs. These would be fertilised with the sperm samples stored by Hildebrandt to create test-tube rhinos which southern white rhino surrogates would, it is hoped, carry to term, producing genetically-variable offspring.

The brains behind the stem cell technology are those of Katsuhiko Hayashi who in 2016 made headlines after he successfully used mice stem cells to grow eggs which produced healthy offspring.

“This technology will provides us with the missing link,” Hildebrandt said.

When asked why it matters, and is there not an argument for seeing extinction as part of evolution, Hildebrandt becomes irate.

“It is very arrogant to ask why this is important,” he said. “We humans kill a species in its very fragile habitat, and then ask: ‘why is it important to rescue it?’ This animal is at the end of a complex biological system. Its faeces provides food for thousands of insects, its skin living space for ox picker birds, the branches it breaks down through walking through the jungle provides food for antelopes and produces pathways to escape from leopards. It is like a landscape architect on which many species are dependent.

“We learnt a bit about disturbed ecosystems through the ebola and AIDS crises. We don’t know what the long-term effect on the ecosystem might be, but we definitely disturb it by removing such an animal.”

Given its potential for success and the way it has captured the public imagination after Sudan’s death, it is a surprise to discover that the rhino preservation project is something most of the scientists involved are mainly doing in their spare time.

“Everything would have been a little faster had we had solid financing,” Hildebrandt said. “We’re not running out of money, the truth is we never had any money for this.”

The institute is trying to use the momentum created by Sudan’s death to galvanise support. “A 10-year-old girl donated the €100 from her piggy bank towards our work this week. So kids really recognise the importance of this, even if politicians don’t,” Hildebrandt said.

“After all, if this works, it could have a huge impact as a role model for other extinct or near-extinct species.” At the end of April Hildebrandt will travel to Borneo to try a similar strategy to save the Sumatran rhino of which there are as few as 30 left.