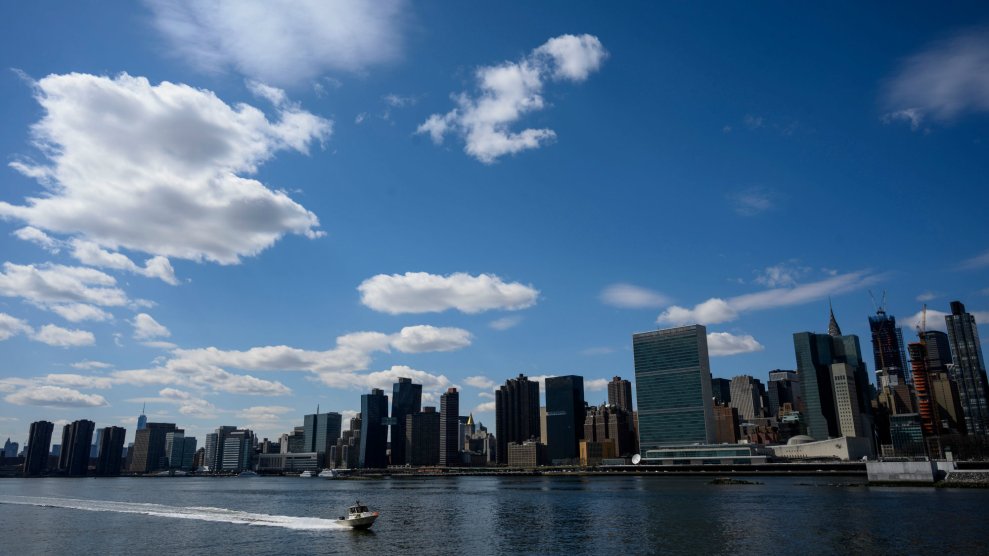 Bill de Blasio has plans to part the East River—and expects New Yorkers to follow him 500 feet into the estuary, to a new land that will protect downtown from the sea.

On Thursday, New York’s mayor reiterated the city’s intent to preserve its core by reclaiming a slice of New York Harbor between the Brooklyn Bridge and the southern tip of Manhattan Island, planting as many as 20 new New York blocks into the silt to keep the rising Atlantic Ocean at arm’s length.

On the one hand, the East River extension is a gargantuan, once-in-a-lifetime endeavor that would transform New York City, at a cost the mayor pegged at $10 billion. On the other, it’s just the latest step in Manhattan’s long march into the harbor, which began with blocks of muddy “water lots” sold to enterprising colonists and culminated with the 1970s construction of Battery Park City on 92 acres of landfill.

It’s an example of the type of investment that cities like Miami and Boston will have to make as climate scientists’ predictions come true. It is also a reminder of how inequitable the adaptation will be, with urgency for the infrastructure of wealthy, central neighborhoods and piecemeal strategies where the land is worth less.

The eye-popping price tag, the mayor reminded New Yorkers, is nothing compared with the damage that would be wrought by another storm like Superstorm Sandy—which inundated New York in 2012, killing dozens and causing billions in damage—or even the periodic storm-surge damage foreseen from rising sea levels in the mid–21st century. “There’s a reason to start thinking about investments like this,” said Howard Kunreuther, a risk management expert who serves on the New York City Panel on Climate Change. “Everyone who’s involved in this panel is very, very concerned about how much worse things are going to get.”

“There’s a reason to start thinking about investments like this. Everyone who’s involved in this panel is very, very concerned about how much worse things are going to get.”

Like the World Trade Center reconstruction nearby, the Sandy-prompted effort to save Lower Manhattan from the sea has been such a lumbering imbroglio that even insiders have struggled to follow along. Consider Build It Back, a multibillion-dollar homeowner assistance program that left applicants bewildered by paperwork and bureaucracy. Or the reconstruction of the L train tunnel, which lurched at the last minute away from a plan years in the making after an irate Brooklynite grabbed Gov. Andrew Cuomo by the lapels. (Really!)

Or the first step of the Big U, the Bjarke Ingels proposal that won the federally sponsored Rebuild by Design competition. After years of community consultation and planning, the Lower East Side was all set for an 8-foot berm at the edge of East River Park, which would have protected ballfields and tennis courts (as well as the apartment buildings behind them) from storm surge. In September, the city abruptly canceled the plan, and after three months, it released its own vision: Bury the entire park under 10 feet of landfill, at an additional cost of $700 million. One advantage of doing that? It would avoid causing lengthy disruptions on the nearby highway, a city commissioner told the New York Times in January. The rising seas may force us to abandon air travel and eating beef, but they will not stop traffic on the FDR Drive.

Which brings us to the Financial District, where some of the world’s most expensive real estate comes face to face with the rising sea, separated only by the elevated highway. Announcing the conclusions of yet another study, the mayor said on Thursday—and wrote in a column for New York magazine—that the city would commission a master plan to expand the shoreline and create a public-benefit corporation to make it happen.

It is not the first time New Yorkers have seen this idea. In 2013, then-Mayor Michael Bloomberg announced a plan for Seaport City: 6.7 million square feet of commercial development, 13,000 new apartments, and 30 acres of new parkland—all built on land reclaimed from the estuary. The raison d’être was protection from climate change, but the project had much in common with the vogue for land reclamation that has swept across Asian coastal cities. In tight markets, it’s cheaper to build land than to buy it. In a subsequent study, consultants and city analysts determined that Seaport City was the best plan for New York in part because it would cost $3.6 billion—but generate $4.3 billion.

De Blasio’s emphasis was predictably different. He admitted that without federal funding it would be “extraordinarily difficult” to expand the city without private developers paying for it (especially now that the cost has moved from $3.6 billion to $10 billion). But, he added, “our focus is not private-sector development.”

Instead, the city has made the case that the Financial District poses a unique challenge. At a press conference, James Patchett, the head of the city’s Economic Development Corporation, which completed the study, called the landfill “the absolute last resort.” “None of the strategies we’re using across the rest of the district will work here,” he said. Only new land can keep the old land dry.

The elephant in the room, it turns out, is the highway. (No small irony, since transportation is the country’s leading source of the greenhouse gases that got us into this mess in the first place.) The clearance where the highway slopes into a tunnel is too low to accommodate flood walls. The state requires a 3-foot berth around columns and footings. There are other elements that make this area complicated to build up—a subway tunnel near the surface, for example, and a narrow strip of land—but the pre-eminent challenge to raising the land is accommodating the road. The West Side Highway was successfully converted to an urban boulevard; politicians are starting to question the wisdom of rebuilding the Brooklyn-Queens Expressway. Should a 100-year plan really treat an elevated waterfront highway as a fact of life?

There are of course other reasons to expand Manhattan. People like Manhattan, they’ll pay for it, and we can make more of it. And if an extended shoreline protects the core from flooding and pays for itself, then why the hell not? It’s a New York tradition.

For Denise Hoffman, a landscape architect and the author of Waterproofing New York, the Lower Manhattan defense is another expression of the philosophy behind the much-derided “harbor barrier” idea advanced by the Army Corps of Engineers. “Unless you’re going to surround Manhattan with a wall, the water is going to get in somewhere and in some kind of situation,” she said, asking why a more holistic, citywide solution was not being considered. “How’s it going to look when Lower Manhattan is high and dry and the rest of the city is flooded?”

Unfortunately, what works in Lower Manhattan will work precisely because it is the world’s financial capital. The money for Battery Park City’s protection will come from a bond issue; the money for the East River landfill, if it happens, will come from development. That is one of the deepest ironies of climate change adaptation: Only in the most valuable places will the infrastructure of resilience pay for itself. Where land prices are low—or where they have fallen because of flood risk or damage—the investment no longer looks worthwhile.