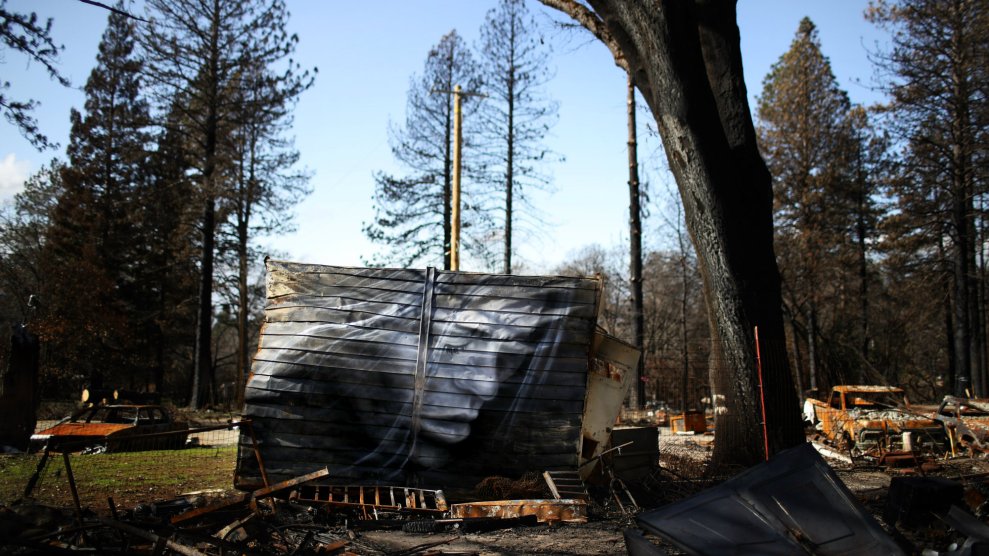 In early February, John Gillander, an older man with a thick white mustache and wire-rimmed glasses, parked his red Ford Fiesta inside a county park in Mohave County, Arizona. Snow dusted the top of Hualapai Peak, which jutted into the sky. His mobile home burned down during November’s Camp Fire in Paradise, California, and everything Gillander owns fit in the back of his car. His two dogs—an English cocker spaniel named Charlie-Horse and a red border collie called Scarlet—have accompanied him on his wanderings ever since he fled the flames.

When I spoke with Gillander, he was waiting for his insurance company to give him enough money to purchase an RV—a stopgap until he can rebuild permanently in his hometown. “I’ve always wanted to travel,” Gillander told me. “And now I guess I have the time.”

It was while slogging through the claims process with his home insurance agent that Gillander realized that he—like many Camp Fire victims—was underinsured. Retired and living on disability checks, Gillander recently joined one of the many lawsuits against Pacific Gas & Electric, California’s largest utility company, which is suspected of sparking the deadly Camp Fire blaze. Local media have reported that a PG&E transmission tower malfunctioned and sparked just minutes before the fire ignited. Hours before the Camp Fire sparked, Gillander, a customer of PG&E, received an email from the company warning that it was considering cutting power because of high fire danger in the area. PG&E, however, did not follow through with an outage at his home. About 12 hours later, his property was completely destroyed.

“My lawyer said it would take about 8 months,” Gillander said. “This path is uncertain, but it’s going to be better than nothing.”

Gillander doubts his insurance alone will be enough to recover, but remains hopeful that the suit against PG&E will help him rebuild. “My lawyer said it would take about 8 months,” Gillander said. “This path is uncertain, but it’s going to be better than nothing.”

But U.S. Bankruptcy Court has allowed PG&E to move forward with its bankruptcy filing. This means that Camp Fire survivors like Gillander are likely to be in for a longer ordeal than they think. He may have to wait years, if ever, to see any damages paid by the company, and he may get less than he hopes for. Under the bankruptcy filing, victims of the 2017 and 2018 California wildfires are in a lower-priority class of unsecured claims than the company’s creditors, such as JPMorgan Chase & Co., Bank of America Corp., Barclays and Citigroup Inc., to whom PG&E owes $5.5 billion in loans.

PG&E is no stranger to disaster and controversy. In 2010, one of the company’s gas pipelines blew up and killed eight people in San Bruno, a suburb of San Francisco. And in early February, just two days after the company borrowed billions to allow it to continue operating over the next two years while going through bankruptcy, a PG&E gas line exploded, burning five buildings within a San Francisco neighborhood. PG&E currently faces $30 billion in liability claims for 17 of California’s 21 major blazes in 2017, and its equipment is under investigation for causing several 2018 wildfires.

If successful, the recent bankruptcy filing wouldn’t be the first time that the state has bailed out the company. In fact, earlier this year, the California Legislature passed a measure designed to prevent PG&E from going bankrupt over payouts to fire victims. The bill in effect allowed PG&E to pay for its wildfire liabilities by adding an additional tax, paid by its customers. But despite that financial cushion, the company still declared bankruptcy, for the second time in less than two decades. PG&E argues that it needs to do so in order to keep providing its customers with energy. But lawyers, experts and activists worry that the company will end up shortchanging wildfire survivors.

HCN‘s requests for comment have not yet been answered, but in a January press release, John R. Simon, PG&E’s interim CEO, highlighted mounting wildfire liability—more than $30 billion and counting—and tumbling stock values as reasons for the bankruptcy. Simon said the filing ensures that the company will have enough money to serve its customers and support its current obligations.

Catherine Sandoval, a professor at Santa Clara University Law School and a former California public utilities commissioner, doubts PG&E’s motivation for the bankruptcy filing. She finds its justification especially thin now that the company has been found not liable for the 2017 Tubbs Fire. “That wipes $15 billion in potential damages off the board right there,” she said.

Regardless, if it’s successful, PG&E’s bankruptcy would drastically delay cases like Gillander’s—even if the company is found liable for the Camp Fire—and severely reduce how it eventually pays.

“My lawsuit got in before the bankruptcy,” Gillander told me. “Just in the nick of time—it will be part of the settlement.” But that doesn’t mean Gillander’s lawsuit is safe. As of this writing, investigations of PG&E’s involvement in the Camp Fire were still ongoing, and causation is needed to determine whether or not wildfire survivors can sue for damages at all.

Mike Danko, lead attorney at the Northern California Fire Lawyers, is representing nearly 1,000 Camp Fire survivors impacted in one of many mass tort cases being waged against the company. Danko cautions clients such as Gillander that they could be in for an ugly surprise. He worries that PG&E’s bankruptcy will force his suit to be transferred to bankruptcy court, where his clients would get cents on the dollar for the damages they seek, while other creditors would be first in line. “We’re standing toe-to-toe with PG&E’s other creditors and potentially fighting over the same dollars,” Danko told me. “PG&E’s desire to file bankruptcy seems nothing more than a thinly veiled attempt to hold onto more money for the benefit of its stockholders.”

Indeed, PG&E is basing its bankruptcy filing on its possible liability to people like Gillander, even before that liability has been established. “PG&E does not look like your typical company in bankruptcy. They have revenues and billions of dollars in assets. The company argues that its best option for viability is taking this road; whether or not that’s true, is another question,” Sandoval said. “This entire bankruptcy is predicated on assumptions of things that have not yet occurred.”

For many wildfire survivors, the uncertainty of their lawsuits has made overcoming the trauma even more difficult. “Things are not going to get better for a long time,” Gillander told me from inside his car. It was dusk in the desert, and Charlie-Horse and Scarlet snoozed beside him.

“These people hurt me,” he said, before pausing for a long time. “PG&E burnt down our town.”