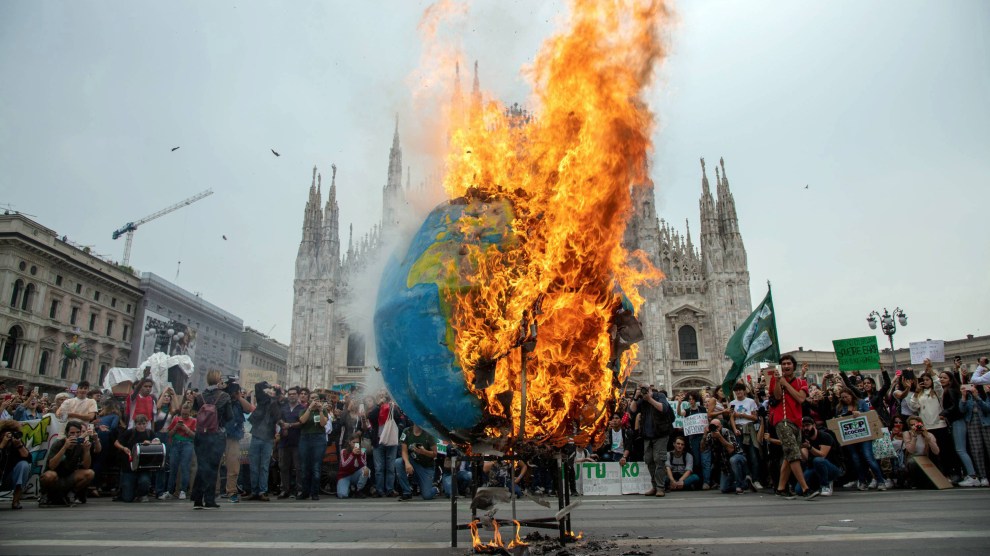 The dire urgency of the climate crisis is now a global five-alarm fire. For the United States to begin to extinguish the flames, the country will need to completely restructure its social and political systems. That’s where the Green New Deal comes in.

Veteran activist and environmentalist Naomi Klein rejects the idea that climate solutions should be comfortable, or that they should work within existing capitalist structures, or that “infinite growth on a finite planet is an OK thing.” Her new book, On Fire: The (Burning) Case for a Green New Deal, explains how those in power, on every level, have refused to act against impending peril—and how a Green New Deal could reinvigorate our climate while providing options for economic growth.

Franklin Delano Roosevelt’s New Deal of the 1930s provides a groundwork for restructuring capitalism in today’s society. As Klein tells Jeffrey, the New Deal did more than revitalize the economy during the Great Depression by breaking up the banks and instituting Social Security and unemployment insurance. It also addressed the ecological crisis of the Dust Bowl by creating the Civilian Conservation Corps, which planted 2.3 billion trees.

“If you look at where FDR put the Civilian Conservation camps,” Klein said, “he seemingly deliberately put them in parts of the country that didn’t vote for him. You know, in rural areas that had voted Republican. And a lot of those areas flipped.”

“When capitalism produces crises, it naturally lends itself to progressive breakthroughs.”

So, hardcore climate deniers and eco-fascists aside, Klein thinks it’s possible to sell conservatives on a progressive agenda. But the feasibility of a Green New Deal doesn’t mean things are all bright and cheery.

“I’m terrified. I am grieving for so much that we’ve already lost, and it will never be OK that we lost it,” Klein said. “If we can see any path, no matter how narrow, it is where we could build a future that could have more real solidarity in it, much more humanity reconnecting with the natural world and with each other.”

Tune in to this week’s episode of the Mother Jones Podcast to hear Klein’s and Jeffrey’s wide-ranging discussion of the ecological challenges the United States faces today, the way the climate crisis is intertwined with countless other social issues, and, as a bonus, the merits of impeaching our current president.