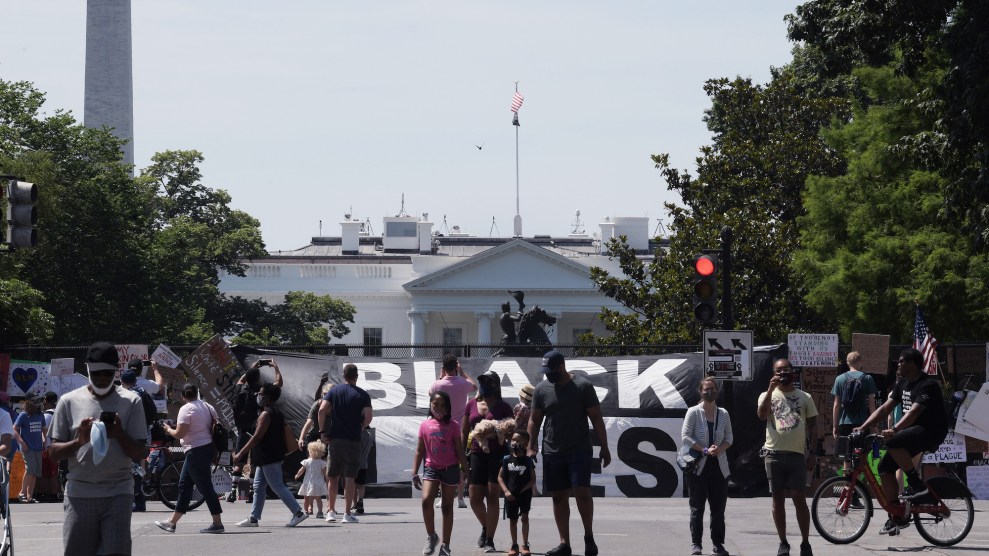 Under the cover of the pandemic, the Trump administration has been hard at work dismantling the rules that protect public health. He has reversed standards for clean cars and mercury emissions from coal plants. He’s suspended rigorous environmental reviews required by the Endangered Species Act and National Environmental Policy Act to expedite approval of highways and pipelines in 30 days. And just last week, the Environmental Protection Agency altered how it calculates the lives saved from cleaner air—a devastating change that will be used to undermine future clean air regulation.

These rollbacks do not affect everyone equally—they’re particularly devastating for people of color. And the pandemic has intensified the burden that vulnerable neighborhoods already carry. On Tuesday, in a hearing before the House Energy and Commerce committee, environmentalists and racial justice advocates detailed the compounding effects Trump’s rollbacks and pollution has on communities that have been hardest hit by COVID-19.

“When we say, ‘I Can’t Breathe’ we literally can’t breathe.”

According to CDC data released in April, Black patients accounted for 33 percent of COVID-19 hospitalizations and 23 percent of deaths—disproportionately high numbers when you consider that 18 percent of the total US population identifies as Black. The disparity has been even more stark in some cities: In Washington, D.C., for example, Black people are 45 percent of the population but 76 percent of total COVID-19 deaths.

The connections between the environment, race, and the COVID-19 crisis are many: Air pollution in poor communities has long caused soaring rates of respiratory and heart disease—underlying conditions that are now worsening outcomes in people who contract COVID-19. The pandemic has also increased people’s exposures to pollution: They’re spending more time indoors, where outside pollution can seep in and mix with asthma triggers like mold. The lack of federal and state enforcement during the crisis has meant communities may face illegal levels of exposure to chemicals and emissions. And while transportation emissions are down overall, some neighborhoods see more emissions from idling trucks.

“When we say, ‘I Can’t Breathe’ we literally can’t breathe,” Mustafa Santiago Ali, vice president of Environmental Justice at the National Wildlife Federation, said in his testimony. Jacqueline Patterson, Director of the NAACP Environmental and Climate Justice Program, pointed out in her testimony that 71 percent of African Americans live in counties in violation of federal air pollution standards. “At every turn the deck is stacked against us.”

Abundant research reinforces this point: A study published last year in the Proceedings of the National Academies of Sciences found that African American and Latino American populations are typically exposed to 56 percent and 63 percent more PM2.5 pollution than they produce through consumption and daily activities. By contrast, non-Hispanic white people are typically exposed to 17 percent less pollution than they produce.

The American Lung Association summarizes the literature in its 2020 State of the Air report:

Recent studies have looked at the mortality in the Medicaid population and found that those who live in predominately black or African American communities suffered greater risk of premature death from particle pollution than those who live in communities that are predominately white. Another large study found that Hispanics and Asians, but especially blacks, had a higher risk of premature death from particle pollution than whites did. This study found that income did not drive the differences. Higher-income blacks who had higher income than many whites still faced greater risk than those whites, suggesting that the impact of other factors such as chronic stress as a result of discrimination may be playing a role. Other researchers have found greater risk for African Americans from hazardous air pollutants, including those pollutants that also come from traffic sources. Due to decades of residential segregation, African Americans tend to live where there is greater exposure to air pollution.

More recent research has found that COVID-19 outcomes are worse in high-pollution communities. In a preliminary study from Harvard in April, researchers found that even small increases in fine particulate matter, known as PM2.5, corresponds to about an 8 percent increase in COVID-19 deaths. People who faced long-term exposure to pollution of 15 to 20 years in 3,080 US counties had much higher death rates from COVID-19.

Yet Trump has turned a blind eye to the devastating connections between pollution and the pandemic. In the last week, he’s also shortcut environmental reviews so the administration can expedite fossil fuel infrastructure projects, making it easier to build petrochemical plants, incinerators, and toxic dumps at the front steps of communities of color. Despite all this, Trump has spent the last week bragging about his environmental record, claiming, “We have the cleanest air we’ve ever had, like over the modern era.”

That claim comes as an affront to people who work to clean up the most polluted neighborhoods. Trump’s rollbacks are an example of “the different kinds of ways that they kill us and have been killing us for generations,” says Elizabeth Yeampierre, executive director of UPROSE, Brooklyn’s oldest Latino community-based organization. Environmental regulations, she adds, can “force protections for those communities,” but “when they are eviscerated, people are left with industries that run amok.”