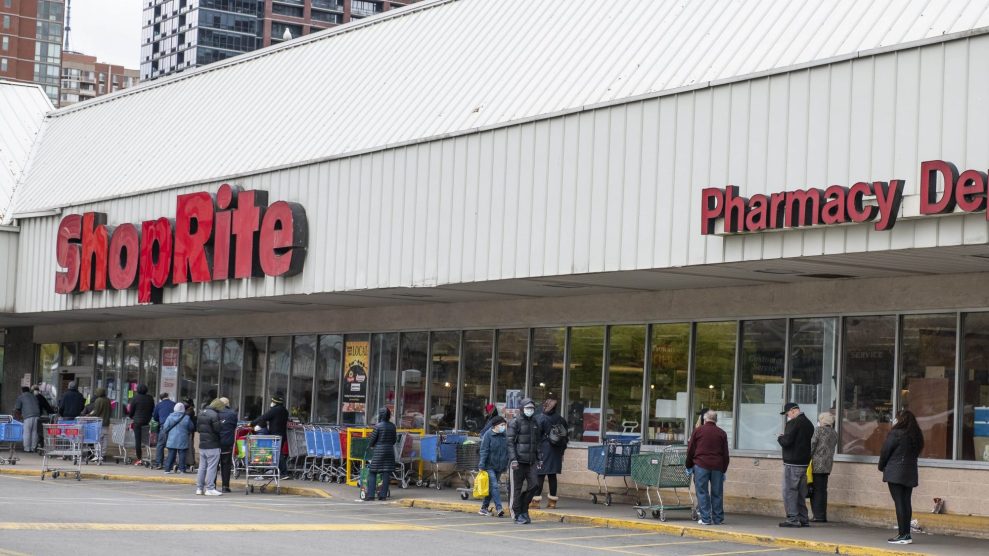 Shoppers waiting on line at The Shoprite supermarket in Jersey City.Kostas Lymperopoulos/Zuma

Now more than ever in the US, your money defines you. If you’re rich, you’ve splurged on enough canned food and TP to ride out several pandemics, let alone COVID-19. As the start of the school year approaches, perhaps you’ve hired tutors for your kids. Maybe you’ve decamped to your country compound to hunker down and escape the masses. But if you’re poor, you may be stuck taking public transport to your essential job. Without much savings in the bank, you have to make frequent trips to the grocery story to get supplies little by little.

So perhaps it’s no surprise that scientists now have the data to show that Americans with low income have been more mobile during the pandemic than the wealthy, potentially exposing themselves to a greater risk of infection. Writing in the journal PNAS, researchers from several California universities describe how they used anonymized cell phone location data and census info to show a dramatic reversal in how mobile Americans have been this year. Before Covid-19 struck, rich Americans moved about more than poor Americans—they can always afford to travel. But between January and April, that flipped. Rich folk are now far more likely to stay completely at home than poor folk: The study found that 25 percent more high earners stayed completely at home during the pandemic, compared to the number of them who had stayed home before. That increase was only 10 percent among low earners. And that has major implications for how we as a nation can fight the pandemic.

“In the early stages of the COVID-19 pandemic, there was a clear mobility response across the board,” says University of California, Davis environmental economist Joakim Weill, lead author on the paper. “In the US, everyone started to stay at home more. But we also found that there is a clear differential between wealthier communities and poor communities, where individuals in wealthier neighborhoods tended to stay at home much more than people in poorer neighborhoods.”

To quantify this, Weill and his colleagues tapped three sources of anonymized cell phone location data. This came from SafeGraph and PlaceIQ, both companies that provide geospatial data, as well as Google. They paired this with census data showing the median income level of given areas across the US. All told, they could track the movements of millions of Americans between January, just before the virus started spreading out of control in the US, and April, when we were deep into lockdown.

Close to half of the wealthiest Americans stayed completely at home on weekdays in April, compared to less than 40 percent of low-earners.

Sure enough, the rich stayed put. Close to half of the wealthiest Americans stayed completely at home on weekdays in April, compared to less than 40 percent of low-earners. The poor traveled farther distances on average: In the same month, people who live in lower-income areas traveled between 5 and 6 kilometers, while the rich traveled closer to 4. The rich nearly halved their visits to recreational and retail areas in April, while the poor cut their visits by only a quarter—perhaps because their jobs required them to return to work there.

To be clear, the researchers can’t definitively say why the data shows this dramatic discrepancy, but they can begin to speculate. For one, essential workers often earn lower incomes, like clerks at grocery stores and pharmacies. Indeed, the US Bureau of Labor Statistics has found that among Americans 25 and older with less than a high school diploma, just 5 percent teleworked in June. On the other hand, 54 percent of Americans with a bachelor’s or more advanced degree were able to work remotely.

“It could also be that people in low-income communities just received different information, and they are following different sources of information. That may have been playing down the role of the pandemic early on,” says Weill. “And that’s especially true in the US, where the debate has been so heavily polarized.”

While the rich can easily stock up on essentials like food and medicine, those living paycheck to paycheck might have to pop over to the store more frequently as money comes in. And the rich might actually be exacerbating the problem for the poor if they are outsourcing or increasing their shopping, or relying more heavily on home delivery, because so many people with low incomes work in retail, warehouse, or delivery jobs. After all, when you order from Amazon or any other online seller, humans have to physically prepare your package, and other humans have to get that package to your doorstep. Other essential workers like farm laborers and meat packers still have to report to work to get those supplies on shelves in the first place. And all of that increases the chances that workers will be exposed to the virus—indeed, Amazon laborers have organized sick-outs to protest what they say are the company’s lackadaisical measures to keep them safe during the pandemic.

“What I liked about the study is that it provides data on something that people have been saying for some time, in sort of hand waves,” says Andrew Noymer, a demographer at the University of California, Irvine, who wasn’t involved in this research. “People have been talking about the revolution of working from home, Zoom and all that. But if your job is welding pieces of metal together or something like that, Zoom—as good as it’s gotten—has not quite perfected that yet. This actually shows, based on these mobile device pings, that what we thought was happening is happening.”

People have been talking about COVID-19 as a sort of equalizer: If you’re a human, you can get it. The virus is so vicious, sometimes the best health care that money can buy still isn’t enough to fend off death. Rich or poor, the virus doesn’t give a damn. But that’s conflating lethality (or how likely a person is to die from the virus) with exposure risk (or how likely a person is to be infected in the first place). “I’m not really sure where that came from, except that people always say this about catastrophes, and it’s never true,” says Noymer. “Some people said, ‘Well, Tom Hanks can get it, and anyone can get it.’ But that doesn’t mean that anyone will get it, or that Mr. Hanks and people in his tax bracket are equally likely to be affected by it.”

It’s critical to note that 43 percent of essential workers are people of color, says Chandra Farley, director of the Partnership for Southern Equity’s Just Energy program. “We sometimes automatically characterize people as vulnerable, without saying they are made to be more vulnerable to certain things because of systemic racism and historic inequities,” Farley says. “People are not low-income. People earn lower incomes because they’ve been marginalized, in a lot of cases, into earning low wages because of their essential work.”

Not all essential workers get health insurance from their jobs, and that’s another underlying factor in the disparities among who is most vulnerable to the virus. The COVID-19 mortality rate for Black Americans is 3.7 times higher than the rate for white Americans, due in large part to unequal access to health care. Latinx people are 2.5 times more likely to die of the disease than white people. In San Francisco, the divide is particularly stark: One study in the city’s Mission neighborhood found that 96 percent of those who tested positive were Latinx, even though that group only accounted for 40 percent of participants. Fully 90 percent said they couldn’t shelter in place at home.

The new mobility study has big implications for how the US can face down the threat. It provides data showing a clear income division in exposure risk at a time when economic pressures on workers with low incomes are rising. The additional $600 in weekly unemployment payments from the feds has now lapsed, and politicians are struggling to hammer out an agreement to extend the benefits. Without one, tens of millions of Americans may not be able to pay rent or their mortgages. Should they lose their homes, many would have to stay with family, in shelters, or in homeless camps, which could further expose them to a virus that thrives in crowded conditions.

Experts are predicting that we’ll have a vaccine as soon as early 2021. But when it lands, we won’t have nearly enough to go around, at least at first. “That means that we are going to be facing a vaccine allocation question: Who should get the initial vaccines first?” asks Weill. “I think that these vaccines should be provided for free, that’s for sure. But I also think that they should be provided to essential workers or people in low-income communities that probably are at increased risk of contracting the virus, and are so much more vulnerable to it when they get it.”

The solutions won’t be simple, Noymer says. “The idea that we can all just work from home is something I think we need to be careful about, because it’s never going to be true,” he says. “It’s easy to say, ‘Oh, this is an amazing study.’ It’s harder to say what to do.”