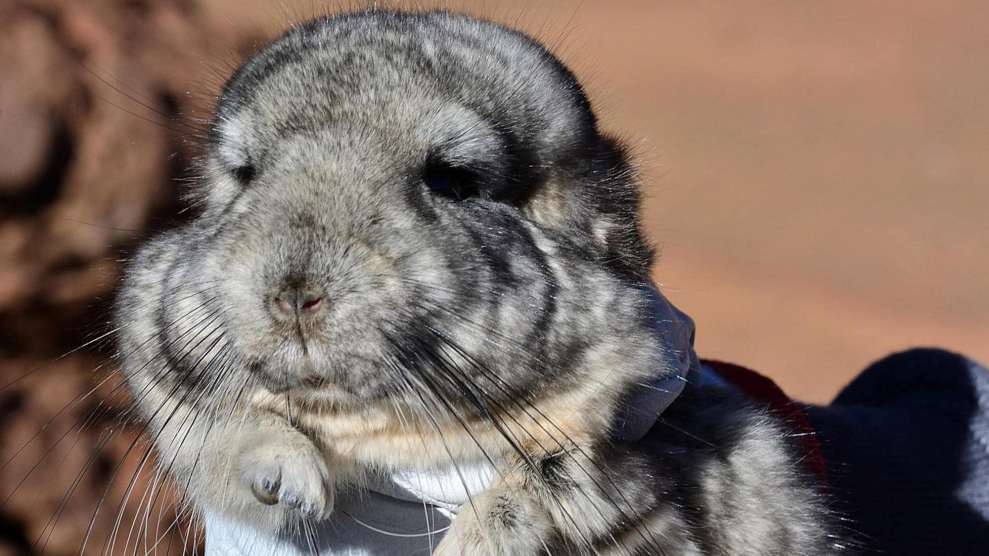 One of 25 endangered short-tailed chinchillas being relocated to protect them from a mining project.Luis Ortega

The short-haired chinchilla, a high-altitude South American rodent, was hunted almost to extinction in the 19th and 20th centuries for its highly-prized fur. Now endangered, a small colony of the species is worth far more alive than dead, skinned, and dried.

The colony in question sits atop 3.5 million ounces of extractable gold, a resource set to be developed by Gold Fields, a South African-based gold mining company.

Gold Fields’ CEO Nick Holland said in 2017 at a mining conference in Cape Town that the chinchillas were one of the main obstacles to the project but the company was determined to find a way to protect the colony.

Big mining initiatives take years to roll, with conservation compliance an increasingly crucial part of the package. Gold Fields’ environmental permit for the Salares Norte mining project—which has an $860 million construction price tag—hinged on it finding a way to move the chinchillas, which are protected under Chilean law. The result is a kind of mini Noah’s Ark initiative high in the mountains of northern Chile.

But not everyone is sure the project will protect the rodents. Its success—or failure—will offer one test of how mining companies are responding to renewed government and investor pressure to account for conservation impacts.

Started in August, Gold Fields’ conservation operation—expected to take nine-months—aims to trap and move 25 chinchillas from the mine site to an area with suitable habitat around two and a half miles away. Their fate is linked to a project that could generate billions of dollars down the road. On the other hand, the cost of the chinchilla project to date is $400,000, including population surveys using satellite technology in rough country.

Gold Fields hails from South Africa, where conservationists pioneered techniques for the capture and relocation of megafauna in the 1950s. Captures of lion, elephant, and rhino typically involve darting, often from helicopters, leaving little room for error. Such methods were initially developed with aims that included the repopulation of the Kruger National Park with white rhinos from KwaZulu-Natal, at the time the pachyderms’ last refuge.

Not everyone is sure the project will protect the rodents.

Operation chinchilla will hardly have the drama of an elephant capture. The short-tailed chinchillas are being moved via small traps to an area that scat and other evidence suggest was once a part of their range, according to Luis Ortega, the Chilean environmental manager overseeing the rodent removal. The animals are easy prey: Fur hunters can scoop the rabbit-sized rodents by hand from their shallow dens, Ortega said.

“We use a trap that is baited inside and closes when the chinchilla enters,” he added. The device, a Tomahawk trap, sounds fearsome but is non-lethal. The bait is a mix of almonds, nut shells, and grass, with an added sweetener the rodents curiously find irresistible: vanilla extract.

“The entire process must be carried out for each of the nine rocky areas where the animals will be removed during the construction of the mine,” Ortega said. “According to the government approved process, two attempts to capture specimens must be made on each rocky area, each lasting 10 days.” If the attempt is unsuccessful, the operation must be suspended for 20 days before it is attempted again, to minimize disturbance.

When each chinchilla is trapped and taken to its new territory, it will be placed in a wire-mesh enclosure for a few weeks to adapt to its new surroundings, and then monitored with radio collars—techniques also often used with transfers of megafauna like rhinos and Cape buffalo.

The operation will take place in arduous territory between 12,800 and 15,400 feet above sea level by a team of experts who know the area. While the chinchilla is protected by law, its new habitat is only protected through the duration of the project, during which the company will monitor the species.

Outside experts have some reservations. “Yes, live-trapping in Tomahawk traps will be a negative experience for chinchillas, and mortality/death is possible,” wrote Curtis Bosson, a Canadian wildlife biologist who has studied small mammal trapping and relocation, in an email.

“Relocation will be a highly negative experience for them,” Bosson added. “Chinchillas are a social, colonial species, they are not used to large disruptions in their daily routine. They know where to find food and who their neighbor is on a daily basis. Relocation would disrupt all of this.”

Relocations for animals big and small have a mixed record. In 2018, for example, conservationists relocated six rare black rhinos from South Africa to a national park in the Central African nation of Chad, part of the species’ former range. Four of the animals died within months of the transfer.

Closer to the chinchillas in size and habitat is the American pika, a mountain-dwelling relative of rabbits and hares. A 2015 study in the journal Biodiversity found experimental translocations of the species between alpine habitats in the 1970s had “mixed results.” But it concluded pikas were “a good candidate species” for relocation projects in cases where the animals’ habitats were threatened by climate change.

Ortega said the chinchilla relocation team will be transparent about the success or failures of the project, with collaboration and oversight from the Center for Applied Ecology, a Chilean environmental consultancy. The team has invited researchers from the University of Chile and the University of La Serena to study the chinchillas, and Gold Fields says that researchers will take genetic samples from the rodents in order to help map their relationship to other populations.

There is little published scientific research about the species. A new population was discovered in southern Bolivia in 2017, the first confirmation of the animal there in 80 years. The International Union for Conservation of Nature’s authoritative Red List classifies the short-tailed chinchilla as “endangered” and decreasing, noting that the population is “severely fragmented” and that research is required on its size and distribution. The Red List also warns that “mining represents a large threat to the species’ habitat.”

“Relocation will be a highly negative experience for them,” Bosson said. “Chinchillas are a social, colonial species, they are not used to large disruptions in their daily routine.”

The project comes amid increased pressure on mining companies to limit environmental impacts. More investors now say that they will factor environmental, social, and governance issues—also called ESGS—into their decisions. A global survey by FTSE Russell, a British analytics firm, found that 53 percent of asset owners incorporate ESGs into their investment strategies. Recently, investor-driven initiatives under the ESG banner have made it more difficult for the coal industry to access funding for new projects. And, in September, angry shareholders forced out the CEO and two other top executives at the mining giant Rio Tinto, after the company destroyed two ancient Aboriginal heritage sites in Australia in order to access iron ore. (The destruction was legal.)

In Chile, the world’s top copper producer, government regulations have also tightened on mining permits. Its environment ministry was only established a decade ago, when Chile became the first South American country to join the Organization for Economic Cooperation and Development (OECD), which requires member states to meet international regulatory standards.

According to a 2017 discussion paper by the Institute of Economic Structures Research, a consulting firm, “obtaining an environmental permit has become a slower, stricter, and a more uncertain process for mining companies” in Chile as the government has “reacted to environmental concerns of the public and organizations like OECD.” Holland, the Gold Fields CEO, told reporters in August that the permitting process had taken three years and required the company to answer hundreds of questions from regulators.

In an email, Ricardo Bosshard, Chile director for the conservation group World Wide Fund for Nature, said that, environmentally, the Chilean public is “very aware, and pressurizes companies and government to change.”