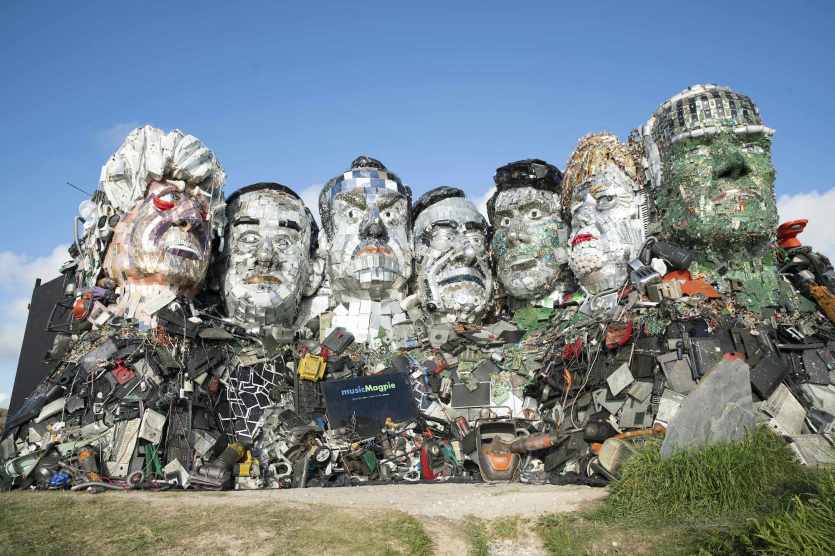 Mount Recyclemore: The E7 was created by British artist Joe Rush with assistance from 15 other artists.Adam Gasson/PA Wire/ZUMA

The seven giant faces loom above the dunes, gazing sombrely over swathes of bright sea thrift towards the ocean.

Even before the G7 had sat down to begin their Cornish summit, Mount Recyclemore, a sculpture made of discarded electronic waste depicting the visages of the seven leaders, looked bound to be one of the stars of the show.

Created by the artist Joe Rush and the tech business musicMagpie, the piece has appeared at Sandy Acres beach, just along the coast from Carbis Bay, where the leaders are meeting. About 15 artists helped create the structure over a frantic six weeks at Rush’s scrapyard/studio in south London. Parts were then shipped down to Cornwall on lorries and put together in situ.

It will remain on the beach until Sunday, after which the plan is to set it up at musicMagpie’s headquarters in Stockport, Greater Manchester.

“E-waste is a growing problem worldwide and its impact on the environment is significant.”

Different artists were tasked with depicting each leader. “They’re individual characters and we’ve had individual artists working on them so they have their individual flavors,” said Rush. “We need to recycle stuff, we need to make stuff last. We can’t just throw it into landfill. It’s not just a politician’s problem; it’s a problem that the human race has to deal with.”

One of Rush’s collaborators, Alex Wreckage, admitted that there had been rows over who would get the best parts. “There were a few arguments: ‘I want that bit, it’s Biden’s nose’, ‘No, it’s Merkel’s.”

The faces are 3 meters by 1 meter and constructed out of 12 tons of e-waste—about 20,000 pieces of discarded tech.

According to musicMagpie, the aim was to highlight the huge environmental threat of electronic waste: it claimed the UK was one of the worst offenders. It also published research that found four out of five British people did not know what e-waste was, and that half of Britons (47%) did not recycle, resell or donate their old tech to charity, with most opting to hold on to it instead, where it ends up at the back of drawers collecting dust.

Steve Oliver, the founder and chief executive of musicMagpie, said there had been an “amazing” reaction to the piece. He said: “E-waste is a growing problem worldwide and its impact on the environment is significant. If sent to landfills, e-waste can leak harmful chemicals into the soil and water or if incinerated, fumes release chemicals into the air, contributing to global warming.”

“Not only this, but everything from our phones to our laptops rely heavily on precious materials to operate, which are not only limited resources but also directly impact climate change when being extracted from the earth.”

As part of its Mount Recyclemore campaign, musicMagpie has partnered with the global waste management charity WasteAid. Throughout June it will give the charity £1 (about $1.42) for each piece of consumer tech customers trade in.

Rush is renowned for his environmental art installations and has collaborated with artists including Banksy, Vivienne Westwood and Damien Hirst. He bills himself as an “artist of the margins.” He and Wreckage are among the artists who create Trash City and the Unfairground in a corner of the Glastonbury festival.